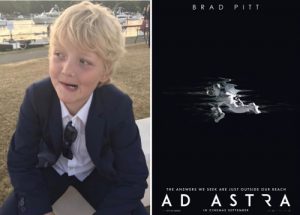 My mum reviews a lot of films but she didn’t know what antimatter was so after we saw Ad Astra at the cinema I had to explain it to her.

Antimatter is the opposite of matter. It explodes when it touches matter which is why they want to use it to power spacecraft. NASA have said it costs $1.75 quadrillion to make one ounce of antimatter though if you wanted to buy it no one would sell it to you.

The antimatter in Ad Astra could destroy the solar system, that’s how powerful it is.

Ad Astra is really brilliant, and just the right length for a film of this calibre. I loved the film, it’s scary and exciting. I also found it really interesting because I used to be really into space.

Roy McBride (Brad Pitt) is an astronaut who has dedicated his life to space. His dad Clifford was also a famous astronaut. Clifford (Tommy Lee Jones) left Earth when Roy was 16 on a mission to look for extraterrestrial life. His spaceship disappeared near Neptune, but now it turns out he’s still alive.

Earth is being attacked by power surges from the antimatter powering Clifford’s spaceship, and Roy is sent into space to send his dad a message. Then he sneaks into a spaceship going to find his dad.

It was funny how there were pirates there too. It looks more dangerous on the Moon than on Earth!

A lot of the time Roy is on his own, though he does meet some space baboons which kill someone. Roy took so many risks which made it really exciting. I really thought he was going to die.

When Roy is on the way from Earth to Neptune it’s 79 days and 2.5 billion miles, and half way through he says the zero gravity is starting to get to him. But people have gone a year in space!

Roy thought his dad was a hero, but when they meet up he turns out to be dangerous, and Clifford even tells Roy he didn’t mean anything to him.

Roy tries to get Clifford to come home but he propels himself into Neptune’s atmosphere through the space rocks, and dies.