You are here: Home / Film Reviews / Holmes And Watson 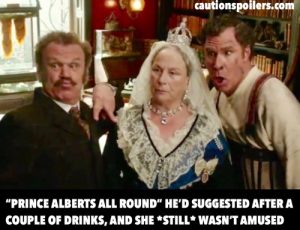 Terrible jokes, having to listen to the ageing Queen of England, coke for breakfast – if you’re desperate to escape a family Christmas and think a trip to the cinema is a good idea, just be warned that Holmes & Watson will give you more of the same.

Covering onanism, breakfast drugs, a lactating Dr Watson, an unelected Head of State and an F-bomb, it turned out Holmes & Watson wasn’t really suitable viewing for my 9 year old after all (though he certainly enjoyed it).

A 90 minute movie that outstays its welcome by 70 of those minutes, this is a sinking ship, though perhaps a disaster not quite on the scale of the Titanic, which turns up in the last third – a full three decades before its real life maiden voyage.

Luckily there is, in those other 20 minutes, enough bizarre weirdness and even glimpses of what could be milliseconds of brilliance to make this movie something of a future curiosity. (At least until the last section, when it gives up entirely.)

Its main problem is that director and writer Etan Cohen doesn’t seem to have the confidence to nail his comedy colours to the mast. It could, with a much stronger and less scattergun script, have been subversive, or caustically mocking, or enjoyably dumb and stupid. And it’s got elements of all three, though not enough of any of them.

Increasingly, as I get older, I want to watch movies that try to do something different even if it doesn’t work, but this is too much of a lost cause with failures that could have been predicted; and that budget could have been used for someone else’s still-unmade film.

It’s often lazy, mocking other movies that have been better parodied many times before. And many of its jokes about recent history and modern technology already sound old-fashioned, with Victorian “self-photographs” and red Make England Great Again hats, alongside Trump-related gags about how democratic America is compared to poor old Blighty.

In other ways it reminded me of those familiar woke bros: 50% feminist (with its world-renowned “lady doctor” from Boston), and 50% misogynist (including a particularly unsavoury joke that had my audience literally grumbling, after previously laughing at the daftest gags).

But that weirdness: some of it will just leave you thinking “what?”. At other times it’s rather clever, and certainly off the wall.

It starts with the pair’s bemusing English accents (“Amuhica”, “Offrica”, with lots of missing syllables and slight slurring) and includes a long gag in court about different metaphors for wanking, after someone is declared terminally ill because of his addiction to self-pleasure. In that last third, it gets even weirder, with no explanation for the appearance of the Titanic and a last-ditch attempt to save the movie with a showtune: an imprisoned Watson (John C Reilly) duets with Sherlock Holmes (Will Ferrell), who’s dancing down a Victorian alleyway. It’s actually not a bad song, and they certainly belt it out, but by then it’s too little, too late.

There are a few enjoyable inverted ideas, particularly around Dr Grace Hart (Rebecca Hall), the beautiful American doctor whose medical pomposity leads her to make the same hubristic mistakes as her male colleagues (she is an expert in electro-convulsive therapy). At last, true equality! Watson is sure he has found a progressive, kindred spirit: “We are truly in the golden age of medicine” he tells her, “there is nothing else to learn”. It’s quite cleverly done, and more of that and less of the laboured Trump jokes would have been welcome.

The Victorian gymnasium, a hall awash with male hormones, is great, with pennyfarthing exercise bikes and a lung workout area where men sit smoking on benches.

Holmes and Watson are supposedly looked after by housekeeper Mrs Hudson (Kelly Macdonald), who is, she freely admits, a trollop – constantly to be found in Watson’s bedroom shagging a succession of famous men from history (Mark Twain and Albert Einstein included).

And if you loathe the movie then check out the outfits: the women’s satin, frilled bustles; Queen Victoria’s diamond necklace and cute crown (no doubt appropriated from somewhere in the Commonwealth); Holmes’ embroidered waistcoats hiding his boned corset; and Watson’s horseshit-covered, raggedly coat, okay maybe not that last one. Macdonald’s dresses, increasingly dishevelled as her list of famous conquests grows daily, sometimes by twos and threes, are a trashy delight.

The plot gets lost in the mess (and is a mess). Holmes’s arch nemesis Professor Moriarty (Ralph Fiennes, yes I said RALPH FIENNES) is threatening to kill Queen Victoria in four days’ time. Holmes and Watson must find the murderer before it takes place, though Holmes is convinced Moriarty is an impostor. He and Watson are assisted by Dr Hart, plus her gormless assistant / ongoing scientific experiment, the silent but almost certainly deadly Millie (Lauren Lapkus).

Grace and Millie are set up as love interests, though actually the only real connection is between Holmes and Watson. Reilly has just played Oliver Hardy in that excellent story of a showbiz marriage, Stan & Ollie. There’s an ocean of finesse between the two films (though not of talent), yet both are about relationships between two men who need each other. The insecure Watson and narcissistic, boastful and self-obsessed Holmes are tied together by far more than are Holmes and Moriarty, despite the famous detective’s brief acknowledgement that without the arch criminal he might be nobody.

Ah, the talent. In a film that is mostly an embarrassment, its cast is mostly an embarrassment of riches: Fiennes is great fun; Hugh Laurie as Holmes’s brother, who communicates with his sibling through telepathy and raised eyebrows, is fabulous in his one scene. Pam Ferris as Judi Dench as Queen Victoria is sternly regal, though she has little to do (except rule over half the world, obviously).

Macdonald is a breath of fresh air as she repeatedly emerges from the bedroom, despite her facial overacting. Even Reilly’s Stan & Ollie co-star Steve Coogan pops up as a one-armed tattooist.

In fact one gets the feeling that everyone involved had an absolute ball making this film, even if hardly anyone will watching it.