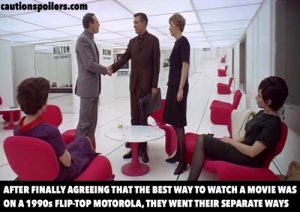 I’m usually that person saying it’s okay to watch movies any way you can – Netflix, cinema, laptop, mobile phone. Hell, download it to your own eyeball then look for explanations in a recently-discovered ancient cave painting, if it works for you.

But 2001: A Space Odyssey is one that, if you get the chance, should be watched on the big screen (it’s being re-released this month for the 50th anniversary). If this is your first time, so much the better; it’s truly an immersive experience, an enigma which is both unhurried and jolting.

The director’s vision is so vast and so eerily pinpoint that the bigger you can see it, the more visceral your reactions are likely to be.

I saw this at Cannes 2018 – a un-restored 70mm print, as it would have looked to audiences on release, in one of the few theatres that can accommodate the soundtrack as it’s meant to sound – introduced by Christopher Nolan.

And you know that scene where the apes are jumping round, waving their arms and shrieking at the strange black monolith that has appeared in their rocky prehistoric home? Well imagine the apes are the audience and the monolith is Christopher Nolan, that’s how excited we all were.

This was the first time I’d seen the movie all the way through beyond some key scenes, and a few parodies.

I’m giving a spoiler warning, though it came out in 1968 and it’s actually probably one film you want to know about before watching.

Kubrick’s movie starts at the Dawn of Man, with those apes somehow learning from the smooth monolith to use animal bones as weapons. These monoliths seem to be an evolutionary jump-start, and whenever one is found it alters our abilities and pushes us powerfully in a new direction.

Usually we think of visitors from the stars as being sorrowful at our warlike behaviour, yet here they are, directing our future before leaving us to it. Despite (or maybe because of) our aggression we still make it to the stars.

Millenia later, Dr Heywood Floyd (William Sylvester) is travelling by space shuttle to Clavius, a base on the Moon. His journey takes him via the space station – an empty and soulless shiny white space of 60s curves, with its echoing corridors and pristine red and white furniture seating the occasional group of travellers, eager for gossip and inside information.

Floyd is gently interrogated by one group, most of whom he knows (including a Russian scientist played by the late British national treasure Leonard Rossiter). There are rumours of an epidemic at Clavius, but it’s spin-doctoring to divert attention from the discovery of a long-buried (several million years ago to be imprecise) monolith. Floyd and the Clavius team travel out to see it, and are present as a radio signal is emitted.

Over a year later and this discovery has led to a mission to Jupiter, where the signal was headed. Astronaut Dave Bowman (Keir Dullea) is assisted by his co-pilot and by super-computer HAL 9000 (Douglas Rain); there are also three scientists asleep in their pods for the duration. But it goes horribly wrong, As HAL turns on them. More human than the humans with his desperate backtracking and whinging after his actions bring forth Dave’s retribution, I almost fell for it.

Continuing alone, Dave (an everyman name for a brave pioneer) finds another monolith orbiting Jupiter, and is pulled into the Star Gate, a children’s kaleidoscope of colour and pattern with a wailing soundtrack.

Ending in an ornate Regency bedroom, he ages to his deathbed before transforming into the foetus Star Child, a sort of rebirth (classic Christian imagery if ever I saw it!)

The special effects were state of the art back in ’68. I’m currently reading Michael Benson’s Space Odyssey: Stanley Kubrick, Arthur C. Clarke, and the Making of a Masterpiece, which explains how Kubrick created stars and galaxies by using paint thinners and paints mixed together with lights shining through them, after he saw the technique used in a short film called Universe (Benson points out Universe was narrated by none other than Douglas Rain).

The technology is remarkably prescient, as it should be considering the expertise Kubrick harnessed during development (his London studio was dubbed NASA East by head of the Apollo lunar programme George Mueller, according to Benson).

The Space Station has voice recognition software for entry security. Dr Floyd sidesteps into a booth for a quick video call with his little daughter back on Earth, as he’ll miss her birthday (as if to underline the everyday nature of this type of call, his wife happens to be out when he rings). God knows, in real life we were excited enough a few years’ later by the Betamax video recorder and Findus Crispy Pancakes.

The pods housing the hypersleep scientists on Dave Bowman’s spaceship look both futuristic and very old. Streamlined and stylish – all shiny white and 60s curves – they also hark back to Egyptian sarcophaguses, shaped for the body. Space scientists – god-kings, en route to Paradise.

The film’s progress is jarring, and also slow-moving, with Kubrick seemingly deliberately lengthening a scene just when we think we’ve witnessed all we need to.

It looks and sounds like a Russian space ballet with its soaring, stirring orchestral shrieking (when it isn’t noisy it’s deathly quiet). The colours are basic: red, white, grey and black with the odd touch of 60s-era orange and petrol blue.

There’s little dialogue though you don’t notice; and actually HAL is quite chatty, his arc bleakly witty as he descends into controlling boyfriend territory.

(HAL’s voice reminded me of Hannibal Lecter in Silence Of The Lambs and I wondered if Anthony Hopkins based the psychopath’s voice on it. People cannot help seeing HAL as human despite knowing he’s not. Lecter may be human, but acts outside norms of behaviours while using people’s adherence to those norms to get them to let down their guard.)

There’s no single answer to what the film is about. Kubrick’s themes are huge: evolution, religion, the birth of humanity, the vastness of the universe vs people’s continual hubris, bravery and loneliness as we tries to tame it.

But beyond the science, we need to work it out for ourselves; not much good has come from giving people only one way to view existence philosophically. (Which is a verbose way of saying I haven’t entirely worked it out myself.)

Style-wise 2001 has dated – that 60s psychedelia against gleaming white – though in other ways it hasn’t, partly as we’ve pressed the Pause button on attempting to send people deep into space.

Perhaps because our attention, and funds, are diverted elsewhere; as our warlike, bone-thwacking nature continues to have such a huge human cost here on Earth.