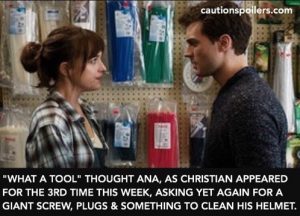 Five minutes in and the cliches are raining down like special snowflakes at a Donald Trump rally.

I was hoping this would be Bridget Jones’s Diary if it had been given an American remake, with Jamie Dornan as Daniel Cleaver and Dakota Johnson as Bridget:

“Cigarettes 0 / Chardonnay 0 / Light beatings 1 / Lip bites 5 / Boob shots 5210. A good day. Saw Daniel last night as he wanted to practice some knots he first learnt in the Scouts. Says he wants to whip me into shape, VERY excited as presume this means he’s going to lend me his personal trainer.”

Sadly 50 Shades of Grey – which I watched today, in preparation for going to see the sequel 50 Shades Darker – is not just unsexy, but also quite dull.

It starts off with virginal Anastasia ‘Ana’ Steele (Dakota Johnson) – who we know is guileless and naive as she’s wearing Emily Blunt’s frumpy cardigan from The Girl On The Train, but must have an inner core of steel because that’s her name – heading off to interview billionaire sex bomb Christian Grey (Jamie Dornan) for the student magazine.

First she falls into his office, then she asks him questions in a boring monotone, including whether he’s gay, and doesn’t even react when he answers entirely in platitudes. Like many people born into a life of privilege, it turns out his success is actually down to simple graft: “the harder I work the more luck seem I have”. He also exercises control in all things, and (hashtag #Sad) some people don’t think he has a heart at all.

Yet for some reason he totally falls for her and she him. It’s like an episode of The Undateables but with people who really are undatable as they are so boring.

It always helps to be able to identify with the protagonist though. And luckily for me, although I have an aversion to both frumpy cardigans and light beatings, Ana turns out to be a Thomas Hardy fan. (For people unfamiliar with him, he was an author who lived in Dorset in 19th/20th century England. While a brilliant writer, his books start off depressing, melancholic, and miserable and then get even sadder. Even the nice men turn out to be rape apologists; flocks of sheep bought with life-savings throw themselves off cliffs; and women are slut-shamed with village processions. Grey could learn a lot from Hardy’s social commentary, but doesn’t.)

Ana works in a hardware store, and Grey turns up there to see her; leading to a suggestive conversation about coveralls, being naked for DIY, and cable ties. A conversation which is cringy rather than wittily bantering.

And therein lies one of the problems with this film: it just isn’t funny. It’s perfectly possible to make a film about sex that people don’t laugh at, but can laugh along with, but even the funny lines, of which there are a few, fall flat. Ana’s pranking of Grey when she gets birth control pills, claiming she’s not allowed to have sex for 4 weeks after starting them, could raise some laughs, but Dornan plays Grey as so humourless that they just sound embarrassing.

Grey talks in banalities and truisms, and likes to come out with ponderous utterances that are meant to mean something but have clearly been thought out hours before, ready to drop into the conversation. He also keeps answering questions in the wrong order, or that Ana hasn’t asked yet, so it’s like the film was edited by Yoda.

There is a storyline involving an official contract that lays out exactly what Grey (the Dominant) can and can’t do to Ana (the Submissive), but there is no subplot (a subplot is the unsung hero of a film – and like cleaning a house, it’s something nobody notices until it’s missing). They never do sign that contract as by then it’s redundant, but he still wants to punish her. It’s when she asks why he wants to hurt her that we finally we get the film’s real title, straight from the horse’s mouth: 50 shades of fucked up.

But without giving what is basically a sex-with-added-storyline flick too much influence, the underlying themes are of a kind that need to be handled carefully. Although Ana does get to amend their contract it’s still a hugely unequal power relationship and much of his behaviour is stalkerish, which isn’t romance.

Grey is surprisingly unsexy, even when his chopper makes an appearance (he even has his own helicopter). The script does Dornan no favours. Johnson turns in the better performance, once we move past the lip-biting – though she does a lot of throwing her head from side to side to indicate how turned on she is. The nudity is very tasteful, with lots of boobs and bums.

Would I go to see the sequel if I didn’t already have tickets? probably not, but I’m going now. And yes I will tell you all about it.