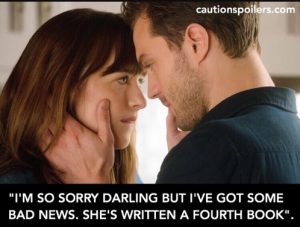 I’m going out on a limb here – albeit a long, lithe, hairfree one belonging to Anastasia Steele – to say I think 50 Shades Darker is better than 50 Shades of Grey. And I can say that with some authority as I watched the original yesterday morning and the sequel last night.

It’s not going to win any Oscars and there is some atrocious acting at times, but (and I know this is damning with faint praise) it’s not completely awful and Johnson in particular is good. The script is ropy in parts but also better than the original over all.

Anastasia (Dakota Johnson) and Christian Grey (Jamie Dornan) split up at the end of the first film after an unpleasant punishment scene, and this instalment picks up with her now working as a literary assistant to Jack (Eric Johnson), head of fiction at Seattle Independent Publishers (SIP) where she helps him sort through the submissions slush pile and generally organises his diary.

Heading out after work to her friend Jose’s first photography exhibition, she finds that he’s included several portraits of her which instantly sell to a mysterious buyer. Well, mysterious for about no seconds at all for us, and for 2 minutes for Ana until Christian turns up, who’s bought them because he doesn’t like anyone else looking at her.

Despite this stalkery behaviour the two are soon back together, though she does constantly push back against his controlling ways and doesn’t take any crap: “this isn’t a relationship, it’s ownership” she says at one point. He tries to buy SIP, and knows her bank details. He also tries to give her $24,000 which she doesn’t want (at this point the cinema audience seemed to be having a “he’s not so bad after all really, is he” rethink).

Although there are again lots of unintentionally funny moments in the film, unlike the first movie where Dornan managed to kill every witty line stone dead with his delivery, in this there are some moments of light relief, including some from Christian. Ana tries to introduce some normality into his life by taking him to the supermarket – when did you last go shopping she asks him. A week ago! he replies. What did you buy? An airline, is his deadpan response.

Later Ana asks if the housekeeper comes into the Red Room “to dust”. She also introduces him to the phrase Kinky Fuckery which sounds like a particularly awesome 1990s britpop album. There are some fun details too, like the SIP editors’ meeting which is full of tweedy jackets, ill matching trousers, and unfashionable ties. I used to be an editor and these are my people, er, people!

They head to a masked ball organised by Christian’s mother, though let’s face it, the disguises are pretty rubbish. A bit like in Shakespeare when there are unlikely mis-identifications involving non identical twins (and that, readers, is the ONLY similarity between this film and Shakespeare). Before they leave for the party Christian introduces her to Ben Wa Balls (that’s a sex toy not a person by the way) which mean every few minutes during the masquerade we get a shot of Johnson going “ah!” or “oh!”, like me getting into or out of a comfy chair once I’d hit 40.

And remember how in the last film I protested the lack of subplot? Well unfortunately it seems like they heard me as this time there are lots of subplots. Loads! Although they all just sort of tail off. His relationship with Elena (Kim Basinger – the older woman who taught him about sex); his ex-submissive Leila Williams (Bella Heathcote) who has gone crazy and keeps appearing in Ana’s apartment like a depressed whey-faced Babadook; and a showdown between Stalker Boyfriend Christian and Sleazy Boss Jack, to name but three. Still at least it stopped me wondering about the actual plot which was basically Anastasia and Christian trying to have a “normal” relationship.

There is some more exposition about Christian’s childhood and why he is like he is, touching on the abuse he suffered before he was adopted, although the script is very limiting in how much Dornan can work with this. At one point Ana draws on his chest in red lipstick to indicate the areas she’s allowed to touch. Later on he takes his shirt off and the red lippy is still there in perfect lines, though I should point out to non-red lippy wearers that this is not unusual as anyone who has put a coffee cup through the dishwasher after I’ve been round can attest. That stuff does not shift!

A lot of the original crowd are back – including roommate Kate, still going out with Christian’s brother Elliot; Rita Ora as Mia but with an expanded role (she’s not great but she’s not awful, and she does have presence); and poor old Jose, who is still madly in love with Ana and whose face – when he sells all those portraits of her during his show only to find that Christian has bought every single one – has to be seen to be believed. JOSE, MAN, YOU WERE FRIEND-ZONED IN EP 1 AND THAT AIN’T GONNA CHANGE.

Dornan can’t do bad dream scenes very well, which is surprising considering he sleepwalks through the whole movie. He looks tired and slightly grubby throughout, though there are flashes of bouncy but bedraggled puppy when he smiles. Johnson looks glowingly gorgeous – Ana is slightly better written this time and she is a good comic actress who only comes apart when the script turns particularly silly. I love Kim Basinger, who plays Elena, and was looking forward to seeing her in this, though her character is very underwritten to the extent that her showdown with my current fave Movie Mom, Christian’s adoptive mother Grace (Marcia Gay Harden, who frankly I’d like to adopt me), doesn’t even make sense.

The music is good – Zayn and Taylor, The Police, and Van Morrison’s Moondance (though I’ll not be able to listen to that in a lift ever again in case I go all Pavlov’s dogs).

There is a lot of sex, most of it not Red Room-based, literally or figuratively – with the same angled shots so that we see Ana’s boobs and bum a lot but that’s it. I don’t even know why she bothers wearing knickers as Christian is constantly whipping them off. Bizarrely he manages to keep his trousers on through several sex scenes, which must surely just make the whole business more awkward – he finally strips off completely about two-thirds of the way through the movie. Her clothes come off super-easily of course. I have no idea why there is this imbalance between his and hers nudity, and surely it can’t be because there’s a male director this time because that would never happen. It’s actually quite depressing that while her character is becoming spikier and bolder, the actual filming seems to be heading back to a less equal time.