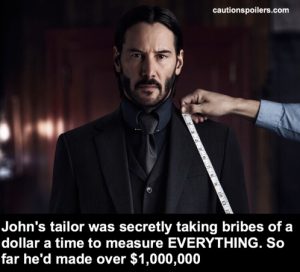 That’s only 603 days away! 603 days to get all those bloodstains out of those lovely suits, John. Actually I have no idea how many days away it is, as I haven’t worked it out. But trust me, I will.

We last saw John running/limping wincingly through the park with his nameless dog at his side, while every assassin in the world turned out to be after him.

Who knows what’s coming next for the world’s coolest, sexiest, hitman? Let’s face it, he’s good at so many things including shooting people, and, um, shooting people. He’s not very good at retiring though.

In fact he’s so damn bad at retiring he reminds me of this elderly guy who works at my Waitrose on the checkout and is so LOVELY I once bought him some chocolate truffles when I was waiting in the queue. Though his refusal to retire does mean anyone else coming up through the ranks won’t get much of an opportunity (I’m talking about John Wick now, not the guy at Waitrose).

Then again, as the lifespan of a hitman up against Wick is about 30 seconds, they probably now have so many vacancies even I could get a job there. I’m eminently qualified as I’m not very retiring, either.

Missed you, John! And the chance to make “is that a gun in your pocket” jokes of course.

Want more Wick to tide you over?