You are here: Home / Film Articles / It’s International Women’s Day! Hear Me Roar Like The T-Rex In Jurassic Park 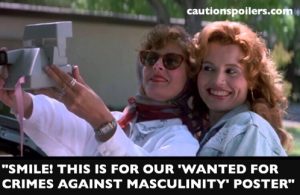 Yes, it’s that day again when all the mysogynists pop up to ask when International Men’s Day is.

So come on over and tell me how to be a feminist. Just kidding, I can google. Once I’ve stopped Hoovering anyway. Also if you remind me I’ll do a post on IMD which is on 19th November. As long as I haven’t got PMT.

Anyway you’ve all heard of the Bechdel Test right? There are different versions flying around (I know, we can’t decide on anything!) but basically it started life in a comic strip by Alison Bechdel, who also credits her friend Liz Wallace for its invention. For fiction films there need to be at least two women or girls talking about something other than a man or boy.  It’s a useful if sometimes blunt instrument for ensuring films have women in them and that they aren’t relegated to the usual roles.

These are some of my favourite feminist films and franchises.

The perfect female road movie. It’s a pity that Thelma (Geena Davis) and Louise (Susan Sarandon) both die at the end though, we need all the ballsy women we can get. I’m sure there are essays somewhere about how they had to die but I don’t have time to google as I’m too busy cooking and shit. Sorry if you haven’t seen it since it came out 26 years ago and I’ve spoilt the ending for you.

The Alien/ Prometheus films are brilliant for women – women protagonists and a female opponent too. And its not just the awesome Ripley – Newt, who survived weeks on her own with the aliens before help arrived, the uncompromising Vasquez, and Prometheus‘s Elizabeth Shaw who followed her beliefs across the galaxy then performed surgery on herself then escaped in an alien spaceship to take those motherfuckers on. I also love how as the pods open before they Facehuggers leap out they totally look like vaginas.

Anything by Jane Austen

Her wit and archness set her stories apart. Well aware of the confines of women and what they could hope to achieve within those confines, she is one of those writers who entertains, makes us think and also reassures us that no we are not going mad, the world is indeed batshit crazy when it comes to women. Emma Thompson’s Oscar-winning adapted screenplay for Ang Lee’s 1995 Sense and Sensibility is hilarious, especially the opening scenes where Elinor and Marianne’s brother wants to give them some money after their father’s death and his wife persuades him not only that he is being too generous but that actually they should pay him. (Also and yes this is v unfeminist but when I was little, Willoughby – Greg Wise – lived next door. Beat that, Austen fans!)

I have a soft spot for the Jurassic films as being a 45 year old woman most people seem to think dinosaur is my actual name, I’m got leathery skin, I stomp about growling all the time and I’m always worrying about my eggs. But all the dinosaurs are female, and let’s face it “HEAR ME ROAR!” could basically be the tagline. Sam Neill even made it into my objectifying list of the film world’s sexiest men, at number 10. And while I am actually quite a radical feminist I also have great hair and constantly marvel at the smoothness of Bryce Dallas Howard’s bob in Jurassic World.

Directed by Penelope Spheeris, who could forget the two basement-dwelling slacker boys who still manage to start their own TV show. The film added so many phrases to 90s language I wonder what we would have actually said without it:
EXTREME CLOSE UP!
Not!
Schwing
It Will be Mine. Oh Yes. It Will be mine.
We are not worthy!

Jane Campion directed this extraordinary and brilliant film set in 19th century New Zealand about a mute woman Ada (played by an Oscar-winning Holly Hunter) who plays the piano, her extremely talkative little daughter (played by an Oscar-winning Anna Paquin) her new husband Sam Neill, his friend whom Ada falls in love with, a piano and a finger. The soundtrack is of course stunning.

This Sofia Coppola-directed movie had amazing access to the Palace of Versailles yet still looks incredibly modern. I love Kirsten Dunst’s performance as the imperfect but still put upon queen (the film is undeniably sympathetic towards her) and it is ravishing to look at.

Funny and fascinating, this film from Gurinder Chadha is the story of Jess (Parminder Nagra), a football mad teenage girl, from a Punjabi Sikh family, who joins a local women’s football team, scores the winning goal in the league tournament then ends up with her friend Jules (Keira Knightly) going to the USA on sports scholarships. Obviously in the film the paths of football and true love do not run smooth.

I saw this when it came out in 1985 and I just remember it was funny, feminist and hugely impactful. Madonna’s first big film role (and quite possibly her best), it massively influenced teenage girls like me in many ways (including fashion –  after this I never went anywhere without lace fingerless gloves and a huge attitude. I may have also dried my armpits under a ladies room hand dryer.) Directed by Susan Seidelman, it sees Roberta (Rosanna Arquette), living a boring suburban life, becoming obsessed with Susan (Madonna) via a series of personal ads in a newspaper.