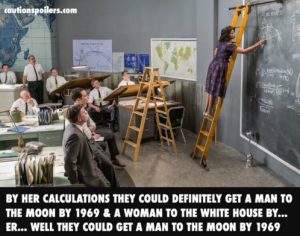 Space travel is almost a religion in 1960s America, with NASA its church and the clever, brave and handsome astronauts its would-be Messiahs. To the extent that for three black women, informing an aggressively racist white cop who has appeared by their broken down vehicle that they actually work for the space programme results in an admiring escort to their workplace.

“Firsts” are always, well, first. I can’t remember the second American successfully sent into orbit. I can’t even remember if it’s in the film and I only saw it yesterday. But in Hidden Figures John Glenn’s successful mission in Friendship 7 is secondary to the firsts achieved by African American women working on the space programme for NASA at the same time.

Katherine G Johnson (Taraji P Henson), Mary Jackson (Janelle Monae) and Dorothy Vaughan (Octavia Spencer) are employed in various roles from out of a dark basement office in the West Area Computers division of NASA. Katherine is a math genius, newly picked out – thanks to her expertise in analytic geometry – to work for Al Harrison (Kevin Costner) in his Space Task Group, which focuses on manned space flight and where she faces blatant and hidden racism from her new colleagues.

Mary wants to train to be an engineer, but has to go to court to even be allowed to take the night classes necessary for her to gain another degree, as education is segregated in Virginia and the school offering the classes is for whites only. Dorothy has been acting supervisor of the department and has applied to be supervisor, but is constantly knocked back.

In 1960s America the Soviets are a threat on every level and a proxy war over the space race has the power to decimate popular morale. And as someone says with a combination of disbelief and world-weariness at hearing about NASA’s new IBM, or International Business Machine, “space is a business”. The Space Task Group is in a race with the Soviets to blast the first white man into orbit (see what I did there. No, don’t bother to email me). Like many “firsts” – Everest springs to mind – the key challenge is not simply getting someone somewhere no one has been before, but getting them back down again safely. For this, Harrison says they need “math not yet invented” – and if women understand one thing, it is that necessity is the mother of invention.

For Katherine, new to the department, the barriers are many. It’s not enough that she face suspicion and blocking at every turn from her new colleagues and from the system. She is having to check the accuracy of colleagues’ math with one had tied behind her back as so much information is held back from her. At one point she simply resorts to holding the page up to the light to view the redacted information through the black ink (which makes one wonder the likelihood of NASA’s new IBM computer having the password “Passw0rd”.)

Each book dumped on Katherine’s desk needs checking already, but with time already short, just going to the toilet is a huge issue for her. Bathrooms at NASA are racially segregated and there is no “colored bathroom” in her new building. Instead she has to cross the campus to her old office, a 40 minute round-trip.

When they hear that the Soviets have got Yuri Gagarin into orbit and back, it becomes imperative that they up their game and achieve the same. But women are not even allowed in the daily meetings projecting astronaut John Glenn’s re-entry co-ordinates. And Dorothy has to steal a book on computing language FORTRAN from the whites-only section of the town library so she can train her team to programme the new IBM. It really demonstrates how NASA’s own worst enemy is probably NASA.

Despite all this the film is genuinely funny as Mary and Dorothy are so acerbically witty. When they meet the policeman in the opening scene and, so surprised is he to find African Americans working for NASA, he says “I didn’t know they employed…”, one of the women quickly replies “women?” The picnic lunch after church that the women attend is punctuated by Mary and Dorothy’s attempts to get Katherine and Jim Johnson, a newly-returned colonel, together.

The background of 1960s suburbia adds a mixture of cosiness and anxiety – new homes full of white goods and modern furniture, civil rights demos on corners, and school drills to prepare children for nuclear war with the Soviets – and reminded me of growing up in 1980s Britain as Mrs Thatcher encouraged rampant consumerism but every news programme was switched on in trepidation in case our days really were numbered. (I can still recite the Soviet leaders from Brezhnev to Gorbachev like audible worry beads. Actually I can do them from Lenin but that’s showing off.)

I found the technology pretty impressive. Huge room-filling computers of whirring spools and punched cards and hulking grey boxes with less calculating ability than a modern smartphone (I have no idea if that’s true, don’t both to email me Part 2) are easy to mock but of course every society uses the most cutting edge technology for the time (ok apart from when the Romans left Britain and we forgot how to do pretty much everything, and Concorde. Don’t bother to, etc etc Part 3).

The excellent performances and true story behind Hidden Figures certainly tug at the heartstrings – it’s one of those particularly well-made, inspirational true stories where you know it couldn’t actually have all happened like that (timelines are contracted, characters are amalgams of several people) and you’re aware that your feelings are being slightly manipulated but that hardly detracts from the film itself or the achievements of the real-life women involved. I alternately cried, laughed, and sat in horrified silence at the injustices, and – as I’m also really quite shallow – swooned over the nipped-in dresses and tailored pants.

Unsurprisingly the racist language and overtly discriminatory attitudes of the time, to African Americans and to women, are shocking now. It would be consoling to think that those times are of the past. Hidden Figures should be on the curriculum to ensure they’re consigned there for good.

When you’ve seen Hidden Figures (because you WILL go to see it won’t you) wait for the very last scene for updates about, and photos of, the “real” Katherine, Dorothy and Mary – fascinating stuff.