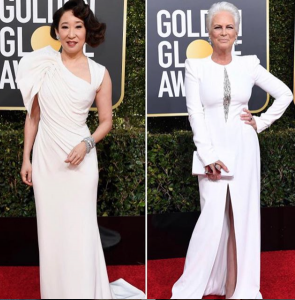 Sandra Oh fabulous in Versace, Jamie Lee Curtis also looking fabulous but also a bit like if Pat Butcher had been in Dynasty instead of Eastenders

The 76th Golden Globes award ceremony took place in Hollywood on Sunday, the first of the big awards season events.

Congratulations to the winners and everyone involved in the winning films, except Bryan Singer.

The Golden Globes are awarded by the Hollywood Foreign Press Association (HFPA), and include TV and film.

I love awards ceremonies mainly for the outfits. 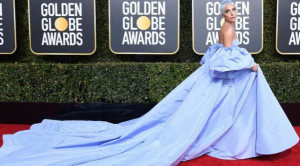 I always like to think I’d be an elegant awards dresser though actually I’d probably pitch up in a massive satin and lace ensemble with a bustle and an enormous 18th century wig complete with fake fruit.

Sadly few Hollywood actresses take sartorial advice from me, and I think there’s a reason for that. 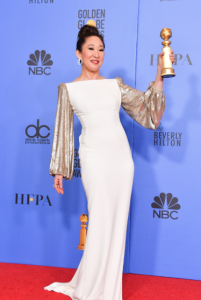 Sandra Oh with her award

This year the event was hosted by Sandra Oh and Andy Samberg.

It was a huge night for Oh, on a personal level and in terms of representation of Asian people (Oh is Korean-Canadian).

By the end of the evening she had become the first person of Asian descent to:

– host the Golden Globes itself

She is also the first woman of Asian descent to win a Golden Globe for best actress in a TV drama since Yoko Shimada back in 1980 (who won for Shogun).
Back to top

The number of voters for the globes is very small. 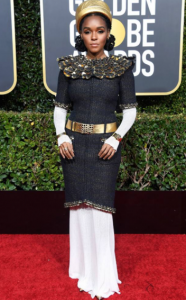 Janelle Monae in Chanel. It is possible to be stylish and warm in evening wear

This year around 90 people decided who won (there are 8,000 Academy members who can vote – in various categories – on the Oscars).

90? I’ve seen more people waiting outside our local butcher’s on Christmas Eve for their organic turkeys.

Still, I’m always fascinated by other people’s “best of” choices, especially if they also leave me spitting tea out of my nose (“how COULD they neglect Hunter Killer?” I said, and will soon be saying again at the Baftas and the Oscars though hopefully not at the Best Submarine Movie Awards). And a small voting contingent doesn’t mean their choices are of no value or interest. These are entertainment journalists, after all.

But it does mean I don’t feel so bad about concentrating mainly on the outfits.

Though to be fair, as you’ll discover at Oscar time, I’m not really that bothered who wins there either, and I’ve usually forgotten within a few weeks.
Back to top

Awards Ceremonies – Yes Or No? 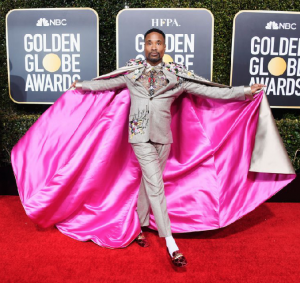 My take on awards is that at their best, when the right people win (the ones I think should win, preferably) it’s a great opportunity.

It’s a chance to reward artists, bring less well-known performers and creators to the fore, find a wide audience for smaller movies, promote diversity and equality of opportunity, and also to signal that big budget crowd-pleasers can have artistic merit.

Let’s face it, it must be great to win, and to get dressed up for the ceremony.

And if you lose you can practice your craft by fixing that grin while slowly smuggling your speech to your mouth and eating it, so no one finds it later on the dance floor and posts it on Twitter.
Back to top 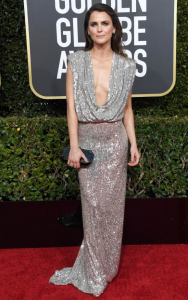 Kerri Russell. I imagine a dress like this is less scary to wear than to watch someone else wear

Despite shrinking audiences, movie award ceremonies still reach millions of people and a well-written, well-timed podium speech by a winner can have a huge impact.

As Regina King, winning Best Supporting Actress for If Beale Street Could Talk, put it “our microphones are big and we’re speaking for everyone”. She then declared that in the next two years everything she produced would be 50% women.

Admitting it would be, for her, a challenge, she also challenged others to do the same.

Glenn Close won for her role in The Wife.

In a tearful and moving speech about following your dreams, Close spoke about her mother who gave so much of herself to her father then felt, in her 80s, she hadn’t achieved anything.

Oh and Christian Bale thanked the devil himself for the inspiration behind Bale’s Globe-winning portrayal of Dick Cheney, drawing a delighted response from The Church Of Satan.
Back to top

The wins this year for Bohemian Rhapsody have put the cat among the pigeons in terms of Oscar expectations. It’s an imperfect film (and problematic) but a huge crowd-pleaser.

A Star Is Born only managed an award for Best Original Song, with Lady Gaga and Bradley Cooper missing out in their acting categories (both performances were excellent though I’m not sure we saw Cooper’s whole face at all as he was always mumbling into his chest). Check out the movie winners, below. 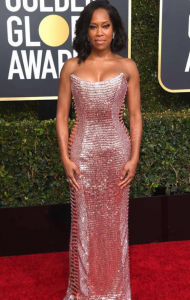 Regina King. Combining glitter and elegance when I can only manage one at a time

Best Performance by An Actress In A Motion Picture – Drama: Glenn Close, The Wife

Best Performance by An Actress In A Motion Picture – Musical Or Comedy: Olivia Colman, The Favourite 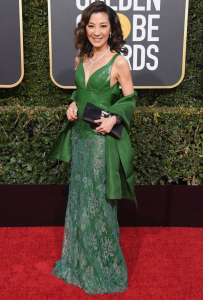 Best Performance by An Actress In A Motion Picture – Musical Or Comedy: Christian Bale, Vice

Best Performance By An Actor In a Supporting Role In Any Motion Picture: Mahershala Ali, Green Book

Best Performance By An Actress In a Supporting Role In Any Motion Picture: Regina King, If Beale Street Could Talk

Best Motion Picture, Animated: Spider-Man Into The Spider-Verse
Back to top 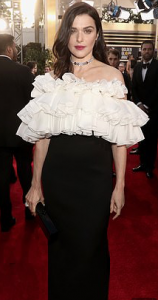 Rachel Weisz. Gorgeous dress, impossible to go for a crafty ciggie round the back in it though

The 1960s-set Green Book, about the African-American concert pianist Don Shirley (Mahershala Ali ) and the friendship that grew between him and his Italian-American driver Frank Vallelonga (Viggo Mortensen), was praised when it first started appearing at festivals.

Since then, criticism has been growing: that it is a movie about racism that makes white people more comfortable, that it is inaccurate, and that Shirley’s family weren’t even contacted about the film. Ali later called them to apologise.

(Check out Elena Nicolaou for Refinery 29 on How The Cast Of Green Book Responded To The Movie’s Controversy.)

Bohemian Rhapsody won two big awards. Its first director was Bryan Singer who was fired for not turning up – there have also long been rumours about his inappropriate behaviour and also allegations of sexual assault. 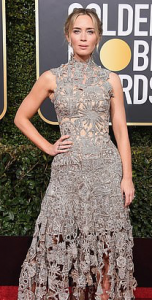 Emily Blunt. DO NOT let your new kitten anywhere near this dress, or it’ll be coming with you

(Dexter Fletcher took over but because of the *rules* he didn’t get a director credit.)

The film was also criticised artistically, for being a heavily sanitised account of Freddie Mercury’s life.

(Stephanie Zacharek for Time magazine here explains more about Bryan Singer and delves into how we deal with films made by problematic people: We Can’t Talk About Bohemian Rhapsody Without Talking About Bryan Singer.)
Back to top

Congratulations to an unexpected star of the show: Fiji Water Promotions Lady. 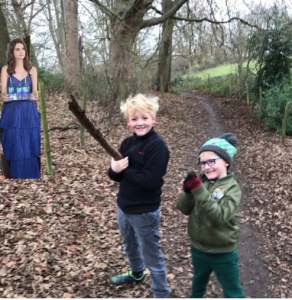 Out for a walk with my kids earlier

She managed to photobomb a number of celebs and is now sure to be popping up everywhere.

On the upside: I did love her dress!

On the downside: the whole escapade has a whiff of planning plus it’s water not Bolly.
Back to top