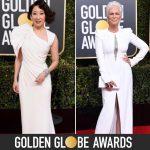 The 76th Golden Globes award ceremony took place in Hollywood on Sunday, the first of the big awards season events. Congratulations to the winners and everyone involved in the winning films, except Bryan Singer. The Golden Globes are awarded by the Hollywood Foreign Press Association (HFPA), and include TV and film. Their category choices sometimes… END_OF_DOCUMENT_TOKEN_TO_BE_REPLACED

At other awards shows this would mean B listers in dresses so high-cut they can’t even wear underwear. But this year while the Oscar frocks were surprisingly demure, the postal delivery service left a lot to be desired. The Mix Up As everyone should have heard by now, La La Land was announced as the… END_OF_DOCUMENT_TOKEN_TO_BE_REPLACED