You are here: Home / Awards / Pushing The Envelope At The Oscars 2017 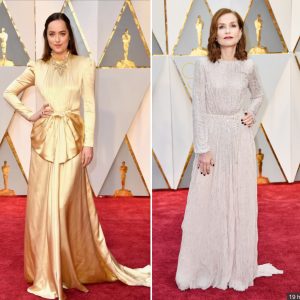 At other awards shows this would mean B listers in dresses so high-cut they can’t even wear underwear. But this year while the Oscar frocks were surprisingly demure, the postal delivery service left a lot to be desired.

As everyone should have heard by now, La La Land was announced as the Best Picture winner before being un-winnered when it turned out Moonlight was really the winner.

This came about because somehow Warren Beatty and Faye Dunaway, presenting the Oscar for Best Picture, were erroneously given the Best Actress winner’s envelope which of course had Emma Stone from La La Land as the chosen one. La La Land producers were already making their thank you speeches on stage when the mistake was realised.

Which means in future years not only will nominees need a thank you speech, and an I-didn’t-think-I-deserved-to-win-anyway losers expression, they’ll also want to prepare a graceful handover action if it turns out they didn’t win after all (to be fair the La La Land producers were the epitome of grace).

I may not have ever been to the Oscars but at my age I’m well aware that most situations like this are cock-up not conspiracy. And they are surprisingly common in all walks of life. Make systems too complex and failsafe and humans will bypass them. Make them too simple and they may not be strong enough.

And let’s face it it’s easily done. I often accidentally open my neighbour’s post when it gets misdelivered to my door and it’s only later I finally look closely at the envelope, which is the same as every other envelope that arrives at my house, and think “but my name’s not Beryl”. 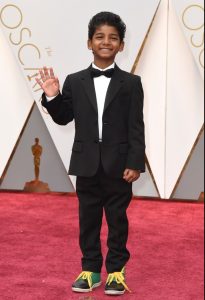 It’s All Over Now

And now it’s the Day After The Oscars when traditionally the A listers wake up thinking god if my public could see how shit I look now (if they are still breathing having forgotten to remove their Spanx when they got home); and I wake up thinking if I wrote, raised a budget for, directed in and starred in my own film starting today, despite having no experience of film making, THIS TIME NEXT YEAR I COULD BE WINNING AN OSCAR (and looking aces on the red carpet obviously).

One glaring Oscars omission is the lack of a Stunt Co-ordinator award. The stunt community is now the only film community that goes unrewarded by the Academy and considering that they add to films this is a total travesty.

Now Back To Those 2017 Academy Award Winners 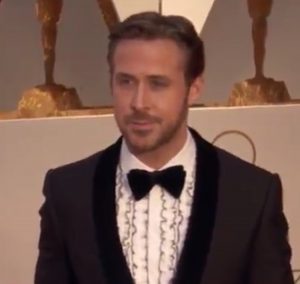 Moonlight was most definitely named Best Picture. Made on a a tiny budget, this Barry Jenkins-directed indie film – and in particular Marhashala Ali’s performance – have been weighed down with entirely well-deserved accolades. It was still a surprise that they won albeit it a very welcome one.

Best Director went to La La Land’s Damien Chazelle, a man so young most of the women in the audience will have knickers older and greyer than him (men, let me point out to you that even rich women hardly ever throw out old undies. Whether through thriftiness or because keeping them means at least we’re not the oldest, most faded expression of womanhood in the house).

Emma Stone was awarded Best Actress In A Leading Role. I loved her performance in La La Land but I thought Arrival the better film and Amy Adams’ Arrival performance more dseserving of an Oscar nod. (I have finally stopped stressing over Adams’ lack of even an Oscar nomination though, as I’ve remembered that she will eventually be awarded an Oscar for her performance as linguist Louise Banks several years ago).

Casey Affleck was named Best Actor In A Leading Role for Manchester By The Sea and don’t get me started. 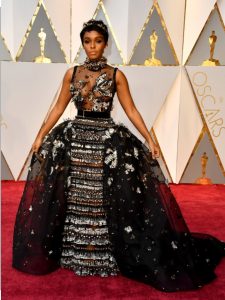 Janelle Monae looking lovely in a dress so wide any A listers behind her would be hidden…. er…

Best Supporting Actress was the brilliant Viola Davis for Fences, whose snot bubble in that film should also have got a nomination for Best Make Up instead of Suicide Squad.

Mahershala Ali was named Best Supporting Actor for Moonlight (his daughter wass born only a few days ago. What a week for him!)

Best Foreign Language Film went to The Salesman. Asghar Farhadi the director could not attend so the award was collected for him by Iranian astronaut Anousheh Ansari. Farhadi decided not to attend the ceremony in protest at President Trump’s travel restrictions for people from six muslim countries.

You can see the full list of 2017 Academy Awards Winners here. 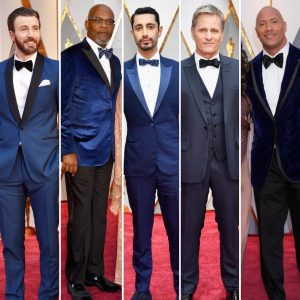 And the outfits? There were lots of men in blue dinner jackets looking like they were about to gather together and break into song like one of those slightly creepy acappella groups where one poor sod in the background only ever gets to do “shetucuh shetucuh shetucuh” all the way through the song (Sorry Viggo, that’s you).

Sunny Pawar from Lion, who along with “older him” Dev Patel currently makes up the world’s cutest actor, looked adorable in his little dinner suit and brightly coloured sneakers.

Ryan Gosling appeared to have smuggled in a Viennetta under his jacket in case he got peckish later. 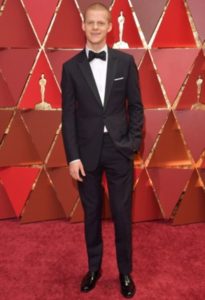 If Hell was made of Toblerlones

Lucas Hedges posed in front of a background of red triangles that looked as if hell was made of Toblerones.

The women’s dresses were almost all – among the A listers anyway – super elegant with high necks and long sleeves.

(Perfect for lazy people who don’t want to get changed out of that evening dress into a satin dressing gown. Just have one outfit that does both!).

I’m also alone in disliking Emma Stone’s gold column fringed dress though to be fair every year there’s a gold column dress I hate and everyone else wets their pants over. 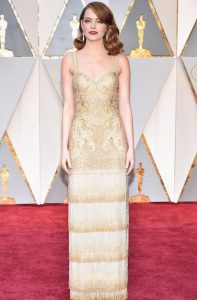 Every year there is a gold column dress that everyone adores except me.

Last year it was Margot Robbie in lustrous tinfoil, looking about 80 and like she was ready to go into a hot oven for Sunday Lunch.

Janelle Monae from Hidden Figures wore a stunningly beautiful dress that was basically what you’d get if you crossed a witch’s outfit with one of those 18th century milkmaid dresses posh ladies liked to wear in their rural cosplay, and looked amazing in it.

Chrissie Teigen was lovely in a long sleeved gold and white dress with high thigh split. She appeared to have a nap during the ceremony and I need to check if it was when Casey Affleck got his award as I really hope it was. 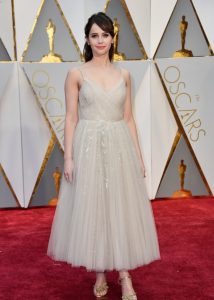 B&Q or Farrow & Ball, you decide

But as she faded into the equally elegant grey background it was clear that the set designers must have popped down to the paint mixing desk at B&Q with her dress and said “this! THIS IS THE COLOUR WE NEED!”