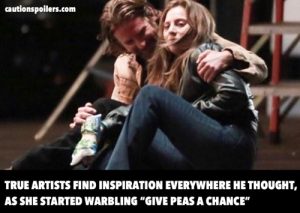 A Star Is Born isn’t a comedy but there are moments when hollow laughter is the only correct response. The downward-spiralling rock legend Jackson Maine, snorting coke before going on stage at a pharmacology industry event, is one such moment.

We love stories in balance, so a simultaneous rags to riches / riches to rags tale ticks all the right boxes. At their most basic they highlight sincerity and talent going up, hubris going down.

Bradley Cooper’s film is far more nuanced than that though, with Jack not so much hubristic as looking over his shoulder – as self-destructive behaviour combines with changes in music to bring him down, while the talented Ally (Lady Gaga) soars.

The chemistry between Lady Gaga and Cooper is striking. Ally and Jack’s mutual obsession seems not just likely but inescapable; their transformation into star-crossed lovers preordained.

It’s after a gig that Jack ends up in a drag bar, complete with a warmly humorous emcee (DJ ‘Shangela’ Pierce) in a “bus driver wig”. Ally is performing, holding her own among the sparkly, huge-breasted acts (It’s “BYOB – bring your own boobs”, Ally tells Jack later).

Singing La Vie En Rose in a plain black dress, Ally gives it her all, sashaying into the audience, handing out flowers, and finishing up lying along the bar making eyes at Jack.

He takes her to another bar, where they discuss her nose, which she hates and he loves, and her attempts to break into an industry which thinks she’s talented but not pretty enough.

The paradox of talent is that you have to open yourself up to be truthful but that lets in other, deceitful forces through the cracks: drink and drugs, leeches and hangers-on, self doubt and insecurity. He’s battling the former, she the latter.

Soon Jack is dragging her on stage in front of stadium crowds to sing with him (their songs are both throaty and soaring). For all her lack of experience it’s Ally’s natural home, and her arrival invigorates him after years of jaded musical repetition. It’s Jack’s philosophy that you have to have something to say, and a special way of saying it. Ally has both attributes. “How you say it is the stuff of angels,” he tells her.

He’s often scruffy, his hair greasy, his face sheeny. This is what famous men can get away with! While Ally becomes increasingly polished as her career takes off and new manager Rez (Rafi Gavron) tries to mould her.

Cooper is superb, every action speaking of years living the paradoxes and cliches of fame. Offstage Jack keeps his head down, mumbling into his chest, his coherence dependent on how much he’s been drinking. (Near the end she too is hunched, head down, as she plays the piano, the lessons of fame well and truly learned.)

“Maybe it’s time to let the old ways die” Jack sings, as Ally watches him from the wings. When her career takes off, she appears on Saturday Night Live. Up until then she’s been mostly dueting with Jack, and apart from Youtube clips, the film could have been set at any time in the last 25 years. Now she’s funky and modern, complete with dancing crew, and the penny drops for him that the industry has changed but he hasn’t.

As Jack watches Ally and her dancers rehearse, from a distance they resemble elongated grey aliens, so different to Jackson in his suede shirt with his guitar. (I loved a supposedly inconsequential scene between Rez and Jack where they talk about Rez’s shoes worn without socks, which Jack simply can’t imagine doing. Rez is delighted to point out his tiny insole socks, hidden from view. He’s suited to his industry of smoke and mirrors and pointless fashions.)

This version blows the shallow if enjoyably campy 1976 movie out of the water, though there are nods to its predecessor. Fake eyebrows, for a start. And like Kris Kristofferson’s John Norman Howard, Jackson is intelligent and talented, with an oversight of fame that still can’t save him.

Ally’s Grammy win is even more cringingly humiliating this time, as Jack spectacularly ruins her moment forever. “I’ll stay with him for life!” she declares, fixed grin on her face, while trying to literally hold him at arm’s length.

Gaga is a joy to watch and to listen to, her Ally initially stripped down to the bare essentials of talent and a voice. Though the film’s main fault is that it never looks deeply enough into her battle to stay true to herself (she’s often keeping the peace between competing male egos, though she does at least get to choose her hair colour). This is a story told very much from Jack’s point of view.

Cooper is mesmerising even as he mumbles into his country boy shirt, his character coping with the humiliations of a career in freefall by taking refuge in addictions which only speed up the descent.

Near the end, at rock bottom, the camera focuses on Jack’s black heeled boots and black jeans as he gets out of his truck. It’s a shot that’s usually a cliche, a famous person’s feet arriving at their sold-out gig or red carpet. I have to mention Ally and Jack’s dog Charlie – so huge and fluffily golden, at one point I thought he’d been replaced with Bungle from Rainbow.

It’s a long film but an engrossing one. Cooper’s direction is assured, letting events evolve steadily and slowly. I loved how Ally and Jack’s first night together unfolds in all its weirdness, their chance meeting leading to a peculiar friendship. It’s the kind of evening that would sound batshit explained to anyone the next day: meeting a rock star, punching someone trying to take his picture, visiting an all-night grocery store for some frozen peas for her injured hand, then sitting together in the parking lot chatting and singing.

Jack is a victim this time. 40 years on we know his addictions are an illness. He also has hearing loss and tinnitus, disabilities both invisible and isolating. Though it’s hard to sympathise when he deliberately calls Ally ugly and untalented while she’s in the bath. (I saw this with a small audience of mostly women, and there was a collective gasp when Jack called her ugly. You can say anything for love, Jack, but you can’t say that.)

Read my review of the 1976 version of A Star Is Born starring Barbra Streisand and Kris Kristofferson.