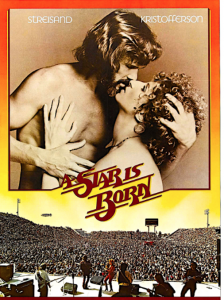 The 1976 version of A Star Is Born is gloriously over the top, lurid, and both self-obsessed and superficial in its obsessions. But so am I, so it’s no surprise I am now developing rather a liking for it.

This is the third movie version of the story, and the first to be set in the music business.

I’d always assumed this to be Barbra Streisand’s film but actually it’s Kris Kristofferson who puts in the more layered and touching performance as rock star John Norman Howard.

Kristofferson absolutely holds the narrative together, bringing a sense of realism even within this glitzy world. He’s also incredibly hot, and I’ll admit my female gaze was all over this movie.

When I wasn’t scrutinising the better choices in Esther’s rich-and-poor wardrobe (“Alexa, who can deliver a tight white Superman tee, white hot pants and white knee socks half an hour ago. And a cream and floral satin trouser suit. And a turban.”) I was drooling over Kristofferson’s bearded, shirtless charms.

He’s not always shirtless, and when he is dressed he looks his best in all white or all black, his body not remotely damaged by the drugs, whiskey and fast food tour meals his character supposedly lives on.

I hesitate to call this a vanity project as Streisand is such an extraordinary singer (plus I’m a total sucker for a power ballad, and Evergreen fulfils my every need on that score).

But while the musical numbers and Streisand’s powerful on-stage performances in this movie are show-stopping, she doesn’t really nail Esther Hoffman. Slightly too deliberately kooky, and funny but not quite funny enough, Esther is rather irritating. Though I suppose you could argue that her iritatingness helps John realise he is still alive, like an oyster with a grain of sand inside it. And her move from funny ditties sung in the clubs to huge soaring stadium-filling songs so quickly doesn’t ring true.

Howard is an increasingly washed-up rock star, alienating his fans by turning up hours late, snorting coke as he heads for the stage, and then walking off. He indulges in the excesses of stardom (riding a motorcycle on stage, shooting at a journalist in a helicopter hovering over his garden) though it starts to feel like he’s going through the motions because he should. Actually he comes across as very intelligent, and hyper-aware that the natural timespan of fame is nearly over for him.

Fame here is like a malevolent living entity which coaxes talented people towards it, before setting them off on an inexorable path that they can see clearly along, but can’t seem to get off.

When he meets Esther – so different to the women he fleetingly spends time with – he is entranced, both by her talents as a singer-songwriter and her refusal to to be starstruck.

He first spies her singing in a bar, after his own disastrous gig. (There’s a great moment when an intrusive fan comes over and takes Howard’s photo with a polaroid camera.) Listening to her play guitar for him the next morning, my metaphor alarm was screeching as he took her fingers and said “you’re not calloused enough yet” when she claimed not to be a great player.

They’re soon in bed together, followed by some engrossing handwashing in a huge bubble bath. Then they’re married, though why he falls so hard for her isn’t made clear, unless it’s because he spies in her his own naive, talented, younger self.

Though he has a house already (a horrible big rock star one full of dreary carved dark wood furniture) they decide to build a ranch on his land, from the looks of it out of cardboard boxes and PVA glue. But more importantly her wardrobe goes from cheap and cheerful to expensively stylish.

Initially, as her star waxes and his wanes, he’s hugely supportive of her, delighting in her success, letting her have her moment – and quite enjoying stepping back himself. But he’s also instrumental in creating her path for success, pushing her forward and using his star power to promote her.

Esther handles her increasing stardom with the aplomb of someone genuinely talented, who has always known she’d get there eventually.

There’s always a stage where the bigger name is both enjoying the chance to retreat into the background and also realising that they are about to be eclipsed. Kristofferson handles these moments with nuance. John’s gradual annoyance as the calls to the house are increasingly for Esther, and his own growing acknowledgement that music has changed but he hasn’t, sends him back to the booze and the drugs. Esther’s moment – winning a Grammy – is ruined by him where he turns up drunk, falling over the stage and sabotaging her biggest night.

A Star Is Born is too long, and doesn’t dig deep into anyone’s psyche. But Kristofferson’s performance and Streisand’s transcendent singing make it worth a watch.

And there are some classic scenes – Esther finding her husband in bed with a journalist/groupie who has told him she’ll do anything for an interview, not with him but with Esther, is both unexpected and entirely expected. John’s self-loathing is played out across his face.

I’m now going to spoiler the ending of a 40 year old film, so look away now if you don’t want to know that he dies. Oops. Sorry. I will say though, that for someone who’s just met his maker at a speed of 160 miles per hour, John looks surprisingly healthy as they zip him into his bodybag.

Director Frank Pierson’s film is showy and two dimensional, and dare I say it, sometimes soapy. But it has a glorious 70s sheen to it, as well as songs guaranteed to bring out your inner diva. And Kris Kristofferson is fantastic as a man trying to get back to his truth, but whose demons get in the way.

Read my review of the 2018 version of A Star Is Born starring Bradley Cooper and Lady Gaga.