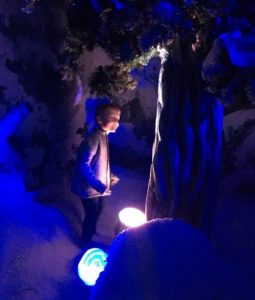 If you’re in London, between Friday 7 December and Christmas Eve, Pop Up Screens is transforming East London’s Hackney Showroom into a Christmas wonderland. (Luckily they keep the heating on as most cinemas are freezing all year round.)

This year’s old and new classics include Arthur Christmas, The Lion, the Witch and the Wardrobe, The Santa Clause, It’s A Wonderful Life, Home Alone, La La Land, Frozen and – possibly not one to take the kids too, lest them embarrass you by knowing all the words – Bad Santa.

I was lucky enough to be invited to see The Muppet Christmas Carol with them (check out my film review here). AND they let me bring my two boys (8 and 5) along too.

Thanks to global warming my two have hardly seen snow, and look on in disbelief when I tell them about “the olden days” during my childhood in the North East where we trudged through a foot of snow to get to school. 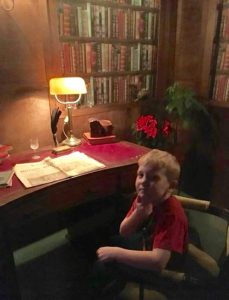 So they were beyond delighted to find Pop Up Screens had transformed part of their cinema space into a Lion, The Witch, And The Wardrobe set.

It’s complete with a cosy, book-lined study, and a wardrobe full of winter coats to squeeze through, leading into…

…a small but perfectly formed winter wonderland complete with that famous lamp post, woodland and best of all SNOW! So much snow, that they could play in, throw around, and watch fall from the sky.

(And is now still appearing round my house.)

They also both LOVED The Muppet Christmas Carol. 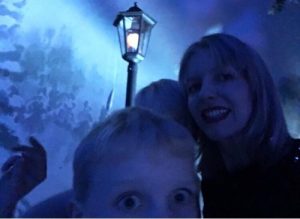 Though I’m slightly worried the bit about the two men being in chains because they were evil has been rather lost on him.

I would also like to apologise to the women in front of us who heard him say in a stage whisper near the end “But Mummy you promised Tiny Bob wouldn’t die!” 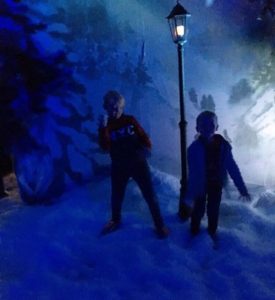 Pop Up Screens’ Christmas line-up continues to 24 December 2017, so check out what’s on, prices and availability.

Tickets are a range of prices, starting at £5 for children and £10 for adults – information and full programme here.

Right, now I need to look into having my children removed from Santa’s Naughty List under data protection legislation.