You are here: Home / Film Reviews / The Muppet Christmas Carol 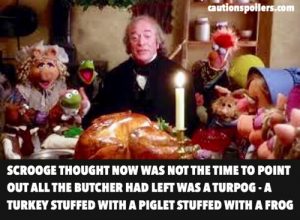 This Victorian London is delightful, as we really want it to have been – with snowy cobbled streets and a population of muppets, by which I mean funny American muppets not the thousands of muppets I usually find when I visit our capital city in a hurry.

The opening credits include From the novel by Charles Dickens, and actually this is a remarkably faithful adaptation; a Christmas cracker of a festive film, with the addition of lots of jokes and a classy straight man.

It’s a film that never talks down to its audience. Caine plays it complete straight as the miserly Ebenezer Scrooge, and much of the dialogue is from the original novel. The songs are fun (I particularly like the line “Every day, in every way, Scrooge is getting worse”, which my children will surely soon start warbling about me); and because most of the puppets take the Professor Higgins approach to singing and actually say their verses, you can hear almost every word.

There’s some genuine sadness too, as we wonder at Tiny Tim’s eventual fate.

Rizzo the Rat gets to play himself, and he’s certainly cunning: “Hey I’m creating scarcity. Drives the prices up!” he tells Dickens, when they’re trying to sell apples in the market and Rizzo keeps eating the merchandise.

But stalking this festive scene is Ebenezer Scrooge. His business partners may be dead but Ebenezer still works out of the Scrooge & Marley offices, and just because it’s Christmas Eve doesn’t mean even the tiniest dusting of Christmas glitter has made it down the chimney: “Very well, you may giftwrap them!” is his response to Mr Cratchit after he’s asked his employee to prepare the next day’s eviction notices and Cratchit points out it will be Christmas Day.

The only reason they eventually get the day off is because every other company will be shut so Scrooge won’t have anyone to do business with.

The first ghosts to visit Scrooge are the Marleys, bemoaning their fate as they shake their chains thanks to their greed in life. They tell him he will be haunted by three ghosts, and only by facing up to these spectral visitors can he evade the Marleys’ miserable fate.

That night the Ghost of Christmas Past appears. It’s a young girl, white and wraithlike, with long red hair. They visit Scrooge’s childhood, watching his miserably lonely school days, where it becomes clear why he has become the man he has. No child is born an Ebenezer. Then it’s off to Scrooge’s first job, at Fuzziwig’s old rubber chicken factory. His first employer was “as hard and as ruthless as a rose petal” remember Scrooge. Fuzziwig is generosity personified, and insists on providing an excellent Christmas party despite the young Scrooge pointing out the enormous cost.

The Ghost of Christmas Present is a ginger giant. “Have you ever noticed that everything seems wonderful at Christmas?” he asks Scrooge, and I think we know what the answer is, or do we? Soon Scrooge is dancing along with the spirit (grandad dancing, obviously), as it snows in daylight under a cloudless blue sky.

Their visit to Bob Cratchit’s home – warm and loving, if short of money and dealing with poor Tiny Tim’s ill health – is an eye opener for Scrooge. And it turns out Cratchet’s goose is well and truly cooked – literally, as poor Rizzo falls down the chimney where he hot foots it across the roasted bird.

I’m pretty relaxed about germs (the 15 minute rule anyone?) but even I would probably draw the line at eating a Christmas dinner a rat had walked over.

Miss Piggy’s Emily Cratchit adds some much needed acidity to Kermit’s wholesomeness. Sometimes you need to be that person to tell your husband’s boss exactly what you think of them. “Odious, wicked unfeeling and badly dressed” she calls Scrooge, and we all know which of those she (and I) probably feel is the worst sin.

And therein is the big question. Why didn’t Miss Piggy get an Oscar? Granted she only appears half way through but Judi Dench got one for eight minutes as another queen in Shakespeare In Love.

The jokes are terrific and there are some lovely witty background touches; whoever felt it was appropriate to use Rizzo as a pair of bellows to get the fire going, deserves an extra helping of plum pudding. The special effects are a little ropy but this is, after all, a 25 year old film.

By now Scrooge has been changed, and for the better. Well, mostly.  “With a glass raised to toast your health and a promise to share the wealth” he sings on Christmas Day, before giving scuttles of coal as the perfect Christmas gift.

I saw The Muppet Christmas Carol with popupscreens.co.uk, check out their 2018 line up of Christmas films set in a snow-filled Lion the Witch And The Wardrobe wonderland.

buy The Muppet Christmas Carol on vod, dvd or blu-ray from amazon uk

rent / buy The Muppet Christmas Carol on vod from amazon.com