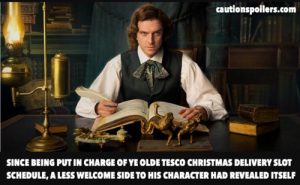 *** Check out my review of The Man Who Invented Christmas ***

Of course it was invented by a man, that’s why women do 80% of the bloody work for it.

Just kidding guys! I know it’s tough doing the £5 Secret Santa for the person you’ve sat next to in the office for 10 years.

Anyway I will momentarily stop icing the Christmas cake, praying to god for real snow, and gift wrapping a million presents for people I had no idea I was related to, just long enough to tell you all about comedy drama The Man Who Invented Christmas, which I have to say does sound good.

But then I LOVE Christmas even though it costs a fortune and involves me encouraging my children to believe in a strange man who comes into their house while they are asleep but it’s okay as he brings presents.

The movie follows Charles Dickens as he writes A Christmas Carol – the book which reinvented the festive celebration as we know it now, except without Lego advent calendars, Elf On The Shelf and cranberry flavour Hot Cross Buns. So not really, then.

Though Dickens’ classic did give us Scrooge, Tiny Tim, and ghosts of Christmas Future and Past, and a fantastic Doctor Who Christmas Special which I hope you all saw. Oh and he also left us with a classic of Victorian literature which despite being written in 1843 never gets old.

In the film, Dickens has suffered several literary failures in a row and has to get this one right – and finish it within six weeks. Dan Stephens is the famous writer, and his literary creations intrude into his life as he struggles to finish the story in time. Ebenezer Scrooge is played by Christopher Plummer. It’s directed by Bharat Nalluri.