You are here: Home / Film Reviews / The Man Who Invented Christmas 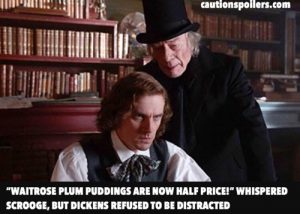 A Christmas Carol is so traditionally festive that we sometimes need reminding that the novel itself created much of that tradition.

The Man Who Invented Christmas picks up the story of its author Charles Dickens, in 1843 – three years after the publication of the hugely successful Oliver Twist, sadly quickly followed by several flops.

No longer the darling of London’s literary scene, the author is down on his luck, unable to come up with a new story, while the bills for his extravagant house refurbishment mount ever higher.

Add in a still-expanding family, his own feckless parents, and dreams of his miserable childhood that will not be suppressed, and the scene is set for a yuletide race as Dickens struggles to come up with a suitably festive tale that also has to be illustrated and published in just six weeks.

This is a darker film than I expected, delving into dreams and nightmares so far contained; though it whizzes along at such a rate it’s never depressing. Dan Stevens is delightfully mercurial as the much-loved author, whose rapidly changing moods affect those close to him in ways he simply ignores.

Dickens is certainly progressive, always promoting the inclusion of the poor and downtrodden, so it’s no wonder that he struggles with the realisation that his own character owes much not only to his let-down of a father, John Dickens, but also to Ebenezer Scrooge himself.

Are father and son really so different? Despite his criticism of the extravagant John (Jonathan Pryce), Charles still lives by proverbs his dad told him. “No one is useless in this world who lightens the burden of another” say both Mr Dickens, a sentiment that gives worth to the least showy and privileged among us.

But they’re also rather fond of saying “people will believe anything if you’re properly dressed”, which Dickens Jnr uses to justify a new cravat as he asks for loans to tide him over, and Dickens Snr so he can buy a new waistcoat and sell on his son’s autograph.

Charles is also fighting a sense of increasing desperation. Meeting with his publishers, his eventual proposed book is, he claims, “a hammer blow to the head of this smug, self-satisfied age”. Followed, on seeing his publishers’ appalled faces, with “It’s a comedy!”

But once he gets going, Dickens finds inspiration everywhere. Characters have been hiding in plain sight among friends, family, or strangers whose lives briefly intersect with his: from the darkly brooding old man in a top hat at a funeral that no one else attends, to Charles’s miserly publishers who object to giving their clerk a day off at Christmas (paid no less!).

“Get the name right, and if you’re lucky the character will appear” says the writer. Scrooge (Christopher Plummer) does just that; he’s a dourly towering figure and also mocking of his creator. Listening to Dickens write a damning character study of Ebenezer himself, he sits silently smirking.

Dickens collects names, writing interesting ones in his little book: Marley is really a doddery old waiter at the Garrick Club, and who should pop up right at the end but a policeman called David Copperfield.

But Charles faces that problem common to fiction writers, when his characters simply will not behave. And as more and more are brought to life, they start turning up en masse, filling his room when all he wants is peace and quiet so he can write, as the days tick down to his final deadline.

Real-life author Thackaray is an added irritant. Cheerfully pacing the Garrick dining room, he’s bursting with joy at any opportunity to offer condolences to peers who have suffered bad reviews – reviews he repeats back in great detail. (And parents, yes that is Balamory’s Archie the Inventor, otherwise known as Miles Jupp, playing Thackaray.)

In a nice touch Simon Callow, who played Charles Dickens in my favourite Doctor Who Christmas special, here portrays the rather curmudgeonly illustrator John Leech. There’s also a young and clever Irish maid, Tara (a sweetly bold Anna Murphy) who Dickens increasingly uses as a sounding board but who also sees both the best and worst of him.

It is Tara who has the trickiest speech in the movie, turning the story at an angle as she demands that Scrooge is worthy of redemption. And while her reasoning initially sounds rather trite, it actually finally forces Dickens to confront questions about Ebenezer he hasn’t so far addressed: what is he afraid of? Can someone really be that irredeemable?

As someone born and brought up in Newcastle (I don’t live there now, they banished me for drinking white wine spritzers and owning a coat) I was delighted to find not only a Geordie character in Dickens’ confidante and fixer John Forster, but also to hear him utter the immortal words about his fiancee, “She’s a canny lass is she not?”

Forster (Justin Edwards) is a perfect sidekick – honestly supportive but always his own man, witty but holding back just enough that he doesn’t end up taking over.

Dan Stevens manages that difficult trick of playing a (mostly) progressive and thoughtful character without making Dickens into a 21st century liberal transported back in time to make us all feel better. And his portrayal reveals a man who can also be bah humbug and judgemental himself.

Victorian London looks as you’d expect: pretty and bustling, and not quite as grubby as it should be, with women tightly corseted and men luxuriantly bewhiskered. Though the assumption that ordinary people are well-read and will queue for and buy literature is welcome.

The best scenes are inside Dickens’ large and bright terraced house, which challenges our ideas of dark and dreary overstuffed drawing rooms. As he works on his characters, his study is bathed in golden light that streams in through chiffon curtains and around floral drapes, bringing a lustrous and cheerful sheen to the heavy mahogany furniture.

There’s no post-credits scene foretelling an updated festive sequel involving Lego advent calendars, cranberry Hot Cross Buns and Elf On The Shelf. But do stick around for the last few screens where you may find both a shard of roast chestnut shell in your eye, and an urge to reach for your chequebook.

And now it is only right that I should sign off in that time-honoured Dickensian fashion “Gan canny this Christmas, pet!” Sorry, I mean “A merry, merry Christmas, one and all”.

Watch the trailer for The Man Who Invented Christmas: