You are here: Home / Trailers / Let’s go to Sweden, they said, it’ll be lovely, they said… The second Midsommar trailer is here! 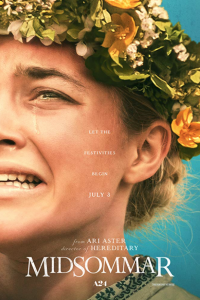 UPDATE 4 June 2019: A24, always on top of their marketing, have produced a fake festival ticket for Midsommar – check it below.

Beware blondes in white dresses with strange dance moves! Frankly my ex-boyfriends could’ve told you that, but if you need more evidence then check out the second trailer for Midsommar, the next movie from Hereditary writer-director Ari Aster.

American couple Dani (Florence Pugh) and her boyfriend Christian (Jack Reynor), travel with some friends to a Swedish festival that occurs only once every 90 years. (It’s probably about 90 years since I went to a festival, or it feels like that anyway.) 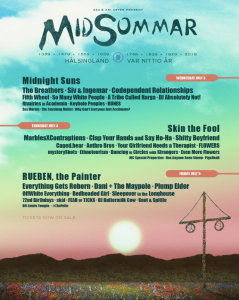 While it looks terrifying, I’d be prepared to face down the horror for those dresses and flower crowns.

I mean, really, how frightening can it b… oh.

The first teaser back in March gave us pagan cults, pretty girls, and what I thought were giant sausages but turned out to be a bear’s intestines.

This trailer gives us a lot more background about Dani and Christian’s relationship – his friends think she’s clingy, they’re on the point of breaking up.

Then something awful happens, and as she tries to cope, invites herself along on Christian’s trip to Sweden for the festival.

Sausage and mash for tea?

Watch it for yourself below. If you haven’t seen the first teaser trailer which came out in March, it’s here (plus images).

It looks as if the release dates have been brought forward – IMDB is now listing Midsommar as coming out in the US on 3 July and the UK on 5 July.