You are here: Home / Trailers / Midsommar murders: Ari Aster is back with teaser for new horror 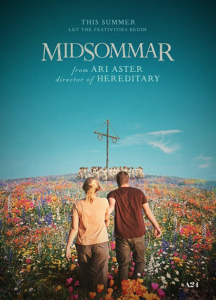 14 May: Watch the NEW trailer now

Ari Aster, writer-director of last year’s terrifying indie horror Hereditary, is back this August with Midsommar – a tale of pagan cults, unsettling festivals, gorgeous summer dresses and what could well be giant sausages, set in Sweden.

The scandi folk horror stars Florence Pugh as Dani, who reluctantly travels to Sweden with her boyfriend Christian (Jack Reynor).

They’re heading for a festival that only occurs every 90 years, which isn’t really surprising when you consider the mess most people leave behind. They’ve probably only just finished clearing up the canvas tents and Camp coffee tins from 1929.

It rather looks like a cross between The Seventh Seal, The Wicker Man and one of those spooky Sunday night serials set in a weird English villages with its own morris dancing team and a creepy vicar.

It’s all incredibly pretty though, so if the film turns out to be too scary (if? I mean when) I shall concentrate on the gorgeous embroidery and ruffles and the perfect plaits.

The very unsettling Midsommar teaser trailer came out today – check it out below. The film is released on August 9 in the US and August 16 in the UK.

Watch the Midsommar teaser now and scroll down for images: