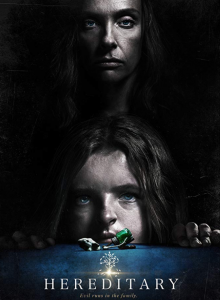 A creaky floorboard and a clicking tongue. Two sounds you don’t want to hear when you’re alone in the house and the only tongue clicker you know of is your dead sister.

“I never wanted to be your mother” Annie says to her teenage son Peter (Alex Wolff), “it wasn’t my fault and I tried to stop it” – which we may all have felt but have yet to annunciate out loud.

Motherhood is often mythologised as a calling, and it’s fair to say that Annie (Toni Collette), the mum in Hereditary, certainly finds that out, if not in quite the way she was expecting.

Annie’s family has been riven with tragedy: her father and her brother both died young, mental illness runs in the family; though the real cracks within her family start to show after the death of her elderly mother Ellen. Her eulogy at the funeral explains Annie’s difficult relationship with Ellen, and her mother’s secrecy.

It was dangerously close to me reading the eulogy at my own tricky and hard-to-know mother’s funeral last year, though unlike Ellen mum did at least try to communicate, if the screeching microphones during our speech were anything to go by (she was nothing if not pedantic about grammar).

It’s a psychologically creepy and violent story. (Hereditary, not my mum’s funeral.) Horror piled on horror, leading to the last scenes which are a crescendo of terror you almost know is coming, as everything is predestined, to a soundtrack of biblical trumpets as if heralding a king.

There’s a lot that’s been used before in Hereditary, and a huge amount going on in terms of ideas – the film is crammed with well-known horror tropes, shrieking music, psychological creeps and disgusting shocks. First-time director Ari Aster constantly pushes scenes as far as they can possibly go. Yet it works. Rather than creating a creamy, over-rich mess, instead he’s managed to produce a perfectly iced multi-layer cake that hold its shape no matter how much you try to hack into it.

Toni Collette is its heart, black and oozing though it becomes. She’s superlative as Annie, her face moving from gut-wrenching fear to human delight to pure evil joy as we watch. The camera lingers on people’s reactions far longer than you think possible as they witness some unimaginable horror. It’s a trick used in horror films for decades but when it’s Collette’s face you’re transfixed by, it feels like the first time.

After Ellen’s funeral, a cascade of hideous events lays bare the family’s tortured problems, while a malevolent force threatens to destroy them.

Annie is a miniaturist, and the idea that our lives and actions may be predestined starts early – as the camera moves in slowly towards a giant doll’s house only for the room to be real, with Annie’s husband Steve (Gabriel Byrne) walking in to wake Peter for their grandmother’s funeral.

She’s painstaking in her work, getting ready for an exhibition, though as terrible things befall her family she recreates each horrible incident, the way most would replay a scene over and over in their minds.

Daughter Charlie’s death is a horrendous accident, after Peter takes her to a house party then leaves her while he gets stoned in another room. She eats some cake and has an allergic reaction, leading to a terrifying dash to hospital. As the car swerves on the lonely road in the dark, Charlie (Milly Shapiro), who’s stuck her head out of the window in an attempt to breathe, is decapitated.

Somehow Peter, Steve and Annie carry on, though it’s that one-foot-in-front-of-the-other grief. Peter is still going to school; Annie disappears to grief groups while telling everyone she’s off to the movies. It’s after one of these meetings that she becomes friendly with Joan (an excellent Anne Dowd), who has lost her son and grandson in an accident.

The line between reality and falsehoods starts to blur, not only in Annie’s miniatures but in the family’s dreams as their minds unravel: dreams and dreams within dreams.

Charlie is all around them. Her tic, clicking her tongue, terrifies her family when it used to reassure her. Pages of her book flap past, an invisible hand writing over them. But Annie is desperate to contact her, and Joan’s seances are her route back to her daughter. They’re awful, as Joan and Annie’s faces contort into joyful mania.

Poor Peter is disintegrating, going from confident teen to shell of a teenage boy. He’s desperate for his mother to protect him but instead she breaks down whatever protective walls he has left. It’s heartbreaking, even if some of her cruellest taunts turn out to be imaginary.

At school he is learning the Ilyad, specifically about Iphigenia. She was the daughter of Clytemnestra and Agamemnon, and was sacrificed (or not!) to appease the gods, though she was told she was to be married to Achilles. Poor Charlie.

Collette is a constant whirring maelstrom of emotion, and action; her desperation to see Charlie again overwhelms her concern for Pete, who is still alive and increasingly desperate. His mother is his rock and soon she too is abandoning him (Steve his dad is a bit of a waste of space, happy to point out the flaws of others. Okay, I accept that turning into a spirit-raising headcase probably needs pointing out, but he offers little in the way of real support to his own son, who’s turning into a weeping, crushed wreck.)

In many ways this is a traditional horror film. And it pays further dividends when the ends are all tied up nicely (no that’s not a clue).

The ideas Aster layers for us are well-established but the cause is unusual. It’s refreshing that everything centres on two elderly women, Ellen and Joan; It turns on its head the idea that somehow when we hit 70 we become sweet old ladies. The invisibility of older women really begins at 45, so maybe this is a warning to ignore us at your peril.

Watch the trailer for Hereditary: