You are here: Home / Trailers / Banning battles to clear his name in Angel Has Fallen’s NEW international trailer 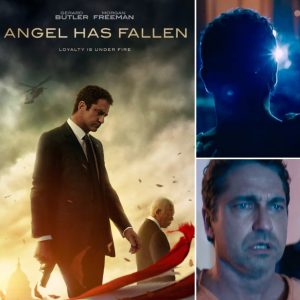 “There are moments of struggle that define us” says President Allan Trumbull to Mike Banning, a bit like me trying to get some poor sucker to look after my unruly kids in August when this is released (bang in the middle of the school holidays!)

This is the third instalment of the franchise about the world’s most trouble-attracting presidential protector, but this time it’s Banning who is handcuffed to a bed, finally fulfilling the fantasies of Gerry fans the world over. (You see, petitions CAN work.)

“The President’s top guardian angel has fallen!” First the White House fell, then London, and now Banning is framed for an attempted assassination on President Trumbull (Morgan Freeman).

Yes, Mike Banning is the Angel of the title, and he does look angelic with those cute dimples. (Sorry. For a minute I forgot this is a website wholly devoted to careful critical analysis of the work of the great cinematic auteurs rather than a place to highlight whether Keanu Reeves is actually Doctor Who, or what it would be like if Gerry Butler worked in my office.)

Angel Has Fallen has everything: Butler being earnest and focused, Freeman as the US president, Jada Pinkett Smith as a tough FBI agent, Nick Nolte as Banning’s grizzly old dad, a swarm of drones, lots of explosions and a cute baby.

There may well be some scenes of utmost destruction that Banning manages to walk away from, though can they top London Has Fallen when Banning jogged off into one of London’s great parks after his helicopter was downed by a barrage of stinger missiles? I doubt it, but I really, really hope they can.

You can watch the first trailer here and check out stills from the film. Angel has Fallen is directed by Ric Roman Waugh, and is released on August 21 in the UK and August 23 in the US. Bring it on, Banning!