You are here: Home / Film Reviews / London Has Fallen 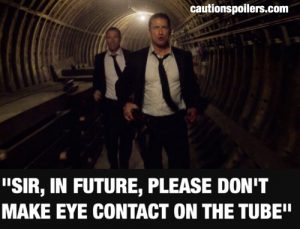 “It’s what I do” says Mike Banning, as he prepares once more to get American President Benjamin Asher in a shit-load of trouble, I mean protect him on his official trip to the funeral of the British Prime Minister, who has died unexpectedly.

To give Banning credit he does later get the president out of situations which leave everyone else riddled with bullets or burnt to a cinder, including a helicopter crash after it’s been hit by a stinger missile.

There are going to be 40 world leaders and 40 protection teams at the funeral in London, a logistical nightmare. Banning is relying on fake timings, a helicopter, an armoured vehicle and hopefully the world’s quickest funeral at St Paul’s Cathedral so he can get his charge home again asap.

I’ve got to admit, I enjoyed London Has Fallen a lot more than I thought I would (and more than I probably should have done).

The jokes are terrible and the politics dodgy, and the hero is a man who if I was president I would keep as far away from as possible, twinkly blue eyes and hint of a sexy Scottish burr or not.

But the main action sequence, as London landmarks fall like flaming dominoes, is well done in its scale and relentlessness – with police, ambulance personnel and seemingly everyone else in uniform turning out to be a killer.

The movie is a big advert for London, or it would be if terrorists hadn’t apparently destroyed most of it. So much of it in fact, that Asher and Banning take refuge in the only London landmark still there, basically because it’s underground – the London Tube. (There’s also a terrific product placement for free British tap water.)

Arms dealer Aamir Barkawi (Alon Moni Abutbul) has supposedly been killed in a drone attack on his Pakistan compound two years previously, during his daughter’s wedding.

Banning (Gerard Butler) is still working for Asher (Aaron Eckhart), jogging and joking that he’s made out of “bourbon and poor choices”, though it looks more like twinkly blue eyes, a hint of a sexy Scottish burr and a tight sweaty T-shirt to me.

Banning’s wife is expecting their first child, a baby that will be more protected than the president with six cameras in its nursery, and the parents as yet have no idea that one stormy night they’lll glance at the screen only to see their baby standing up in the cot chatting happily to a strange misty shadow in the shape of an old lady (trust me, it will happen).

Asher, Banning, and Secret Service Director Lynne Jacobs (Angela Bassett) head to the UK. Each world leader has a little scene to show their humanity before the funeral: German Chancellor Agnes Bruckner gracefully receives a white rose from a small girl; the Canadian PM chats to his daughter on the phone in the car; and it looks suspiciously as if the Italian leader is having an affair.

Meanwhile the London streets are thronged with people waiting for a glimpse of Gerard Butler, I mean those world leaders and their husbands. I mean husband. And wives.

But soon the first official car is blown up, and the first shot fired, and then it’s a bloodbath: bearskin-hatted guardsmen with machine guns outside Buckingham Palace; fake bobbies shooting colleagues; an ambulance man taking aim; almost every world leader dead; and then the huge cathedral doors shut in the face of the American president as Banning tries desperately to get him to safety.

Banning gets Asher into an armoured car along with Lynne and drives like me when I need to get to Waitrose before it shuts as we’ve run out of organic hummus, though admittedly I try to avoid the scary roundabouts.

Impressively, Banning is equally at home driving a car with gears, none of that American automatic nonsense, which made me realise how safe I’d feel next to his stick shift.

But even once they’re airborne again, it’s not over. “Lights out London” says one of the terrorists, and all civilian and military communications go down. The Americans look down over a burning capital: “It was a trap!” says Lynne accurately, if rather unnecessarily.

Then Vice President Allan Trumbull, played by Morgan Freeman who I thought legally had to be the actual president in every film but never mind, facetimes Barkawi, who claims responsibility for the huge attack.

It’s one of those discussions where the writers have tried to be even-handed so every time someone denounces the other side I nod sagely and think “he’s got a point there!” whether about America sending its poor to fight miles from home, or the arms dealer arming failed states that threaten us all, or the West killing families with unmanned drones.

And then Barkawi makes his chilling threat: “You should have let us kill him quickly, as now we’re going to kill him slowly and stream it live for the whole world to see.” And soon Banning has mislaid the president who is about to be murdered live over the internet. Does Banning rescue him in time? And get him unscathed out of the building while everyone else is riddled with bullets or burnt to a cinder?

Unfortunately, after that initially impressive huge set piece, the (many) later gun battles could be anywhere. And subtlety is in shorter supply than non-traitorous members of Britain’s emergency services.

Heavy-handed attempts to appear non-racist position Barkawi as driven by money not ideology, and the terrorists as being from all corners of the globe: “it’s the United Nations of Everyfuckinkbody Who Hates Us” says nicely northern MI6 agent Jax Marshall (Charlotte Riley), though Banning rather undermines this; both with his “go back to Fuckheadistan!” comment to one attacker, and a remarkably long speech about the greatness of America which he makes as he is tackling the President’s kidnappers and which probably won’t help world relations in the long run.

The one liners often aren’t funny (Banning says he was wondering when the president would come out of the closet when the president has literally just come out of a closet – this in a film made in 2015) though I liked Banning’s response when Asher asks him what if Mike doesn’t come back: “You’re fucked”. “That was inspiring” answers the President.

The cast is mostly good, though they were probably groaning at some of their lines (I know I was). Butler is always an effective action hero, let down here by those dodgy jokes and the movie’s dubious politics.

But at 1 hour 40 minutes it’s a film that doesn’t linger over morals or plot, and careers along at a decent pace.

Read my article on all three movies, Gerard Butler’s Fallen Oeuvre, and reviews of Olympus Has Fallen and Angel Has Fallen.

Buy / rent london has fallen on amazon video or buy the dvd or blu-ray on amazon.com