You are here: Home / Film Reviews / Olympus Has Fallen 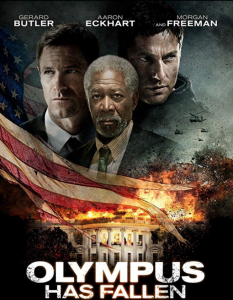 Olympus Has Fallen came out in 2013, when I had a one-year-old baby and the idea of being held incommunicado without my family in a bomb-proof bunker would have sounded like a dream come true.

Sadly, said baby meant I didn’t get to see this in the cinema, his preference being White House Down, I mean The Wiggles.

Gerard Butler is Mike Banning, ex-Ranger and ex-presidential Secret Service lead, removed from his post in disgrace after he fails to rescue the First Lady when her car is dangling off an icy bridge. 18 months on he’s been demoted to a desk job at the Treasury, but he’s bored and listless.

The widowed President Asher (Aaron Eckhart) and his young son are in their official residence when a visit from the South Korean Prime Minister ends in the foreign PM’s assassination and the take down of the White House (Olympus).

The attack starts with a plane designed to cause chaos as it fires on the public in the streets around the White House, but this is only the first stage. The takeover of the iconic building is well done. It’s steady and relentless as teams of terrorists march in. There’s something enjoyable about watching an invasion on film that’s well executed, even if it does mean watching scores of people well, executed.

The mastermind behind the attack is Kang Yeonsak (Rick Yune), traitorous head of the South Korean Prime Minister’s security detail. With President Asher, Defence Secretary Ruth McMillan (Melissa Leo) and various others held hostage in the nuclear bunker underneath the White House, and the building above patrolled by Kang’s commandos, it’s up to Banning to save the day (and the President, the President’s son, and the world).

Butler is on great form as the disgraced agent not really concerned with redemption, but itching to get back to the front line and save the President (and the President’s son, and the world). He’s young and fit, and really lithe in his movements – especially at the beginning when all Banning has suffered is a bollocking from his wife, before he’s beaten up, shot at, stabbed, and falls through a roof. Even by the end, wounded, exhausted and covered in blood, he’s still powered by duty and determination.

Olympus Has Fallen is serious but not po-faced, and never self-referential or ironically jokey. Banning provides what humour there is: sardonic (“believe it or not I came in through the front door” he tells a traitorous ex-colleague when they bump into each other in a corridor during the mayhem), and bleak (joking with terrorists before stabbing them to death).

He does come out with one of those angry speeches people only have time to make in disaster movies. It’s to Kang, over a video link, though Banning looks believably annoyed with himself after his outburst, as if he’s let himself down – having renamed North Korea as “The United People’s Front Of Who Gives A Fuck” and then told Kang he’s going to stab him in the head.

Even in this film though, the jingoism is unpleasant. A closing speech tries to position America as a beacon of integrity, honour and dignity, and there are obvious attempts to swerve likely accusations of racism in its choice of villains. It’s clumsily done. The sadistic Kang is North Korean, but hates the regime because they executed his dad. He also hates the Americans because his mum was killed by a US land mine as they both tried to cross to the South to escape. He hates both sides, but he hates America more.

This is a massive, meticulously planned attack, possibly triggering nuclear war, and all because he wants revenge. It doesn’t make any sense and ideologically it’s all over the place.

Still, logic is never a strong point of movie terrorists, particularly ones created by writers digging into stereotypes while trying not to be *too* racist.

Banning has a radio link to National Security in a Pentagon bunker somewhere, where Allan Trumbull (Morgan Freeman), Speaker of the House and now Acting President, is holed up. The usual suspects are in attendance including the bellicose Chief of Staff General Clegg (Robert Forster), who ignores Banning’s warnings about military counter-attacks; and Banning’s friend and Secret Service director Lynne Jacobs (Angela Bassett).

Freeman is reliable as the career politician stepping up in the twilight of his career. He looks weary as other world powers mobilise their troops, amid dangerous uncertainty on the world stage as America takes steps to recall the 7th Fleet, and withdraw troops from the DMZ between North and South Korea.

As is usual in this kind of fast-paced action film, where we’re not supposed to look too closely through the smoke and barrage of bullets, people make silly mistakes and take stupid decisions.

The President seems unable to stand up to anyone, despite repeatedly declaring the US doesn’t deal with terrorists. Honestly, I wouldn’t trust him to keep my Netflix password secret from my children if they offered him some chocolate chip ice-cream. Even Kang gets a bit sloppy, telling Trumbull he has til dawn to fulfil his demands – rather unspecific timings, considering what’s at stake.

The deaths are numbing, the shootings, stabbings and beatings so frequent they feel like a drumbeat through the film. It’s horrible watching McMillan getting beaten up, though in a film with few women she’s a shining light. Middle-aged, and I’m guessing more of a book lover than a fighter, she turns out to be tough as old boots.

The overall death toll is huge. Corridors are strewn with twisted bodies in blue suits and neat ties, their white shirts splashed with bloody bullet holes; or Korean commandos in dark clothing and face masks. It’s impressive in a hideous way, and an idea that both further films utilise.

Olympus Has Fallen moves through the tropes as methodically as Banning does through the rooms and corridors of the wrecked White House; but it’s well-paced, with the action changing so it never gets boring. Sure it’s sometimes gruesome, and the violence often feels unnecessarily callous. But director Antoine Fuqua’s solid thriller is super-tense, the pressure staying high til the end.

Read my article on all three movies, Gerard Butler’s Fallen Oeuvre, and reviews of London Has Fallen and Angel Has Fallen.

buy or rent on vod or buy the dvd / blu-ray from amazon.com