You are here: Home / Trailers / Angel Has Fallen first trailer and MORGAN FREEMAN IS PRESIDENT! 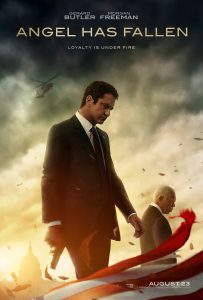 So you can all sleep easy in your beds tonight, apart from the bit where someone sends a fleet of drones to kill him.

With Mike “I’m thirsty as fuck!” Banning (Gerard Butler), accused of being behind the assassination attempt on President Allan Trumbull, the Secret Service agent must fight to clear his name – which involves heading into the woods to track down his grizzled woodsman dad, played by Nick Nolte…

Gerry’s looking pretty grizzled himself, in a sexy way. I like the craggy look, plus he’s soon breaking out of prison and on the run, and it’s hard to stay looking sleek and smooth in those circumstances (well I would, but I don’t like to let standards drop. Besides I might bump into Gerard Butler in them there woods.)

No word yet whether there will be an advert for Great British Tap Water like in London Has Fallen.

Check out the new poster, and images from the movie below the trailer.