You are here: Home / Trailers / IT: Chapter 2 trailer and the Losers Club is back in Derry: “no one who dies here ever really dies” 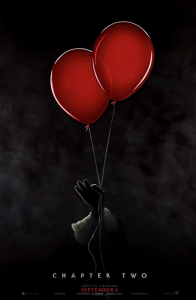 Now that I’ve seen the first trailer for It: Chapter 2,  I’m now both looking forward to 6 September, when the film is released, and hoping it never comes.

It’s taken me several hours to get this article up, partly as at first I was too scared to even watch the trailer, then when I did watch it I was to scared to view it again.

But here it is, and it’s excellent: very clever, utterly chilling and playing on our natural fear triggers at the same time.

The initial focus is on one scene – pretty brave considering how many trailers jump about, juxtaposing scenes for effect that are nothing to do with each other in the finished film.

27 years after the events of the first film, Beverley Marsh (Jessica Chastain) returns to Derry and meets the new inhabitant of her old home, a place which holds horrible memories for her (it still says Marsh on the front door).

You know something awful is going to happen and the scene plays on that as Beverley tries not to let her memories get the better of her, while the new resident moves from sweet if scatty old lady to something far more sinister.

(After this and Captain Marvel’s fight on that train, perhaps it’s time for the world to understand that these evil little old ladies are because we’re ignored in middle age and then we get MAD.)

We also see the rest of the Losers Club, now grown up, and all returned to Derry, as Pennywise’s returning influence becomes clear.

I thought the first film was fantastic, but I haven’t watched it since it came out as it’s one of the few films that still upsets me when I think about it. There are only a handful of scenes in movies which do that (usually when I’ve finished watching a film, I’m done, however much I screamed, shivered or cried during it, which is usually a lot).

But little Georgie going out in his yellow raincoat to float his paper boat in the rainstorm still makes me well up. (That when it came out my own small blond boy had a yellow raincoat probably had something to do with it. It won’t surprise you that despite my gravitating to 1970s-style parenting he now won’t be allowed out to play by himself til he’s at least 30.)

Check out the trailer below. I’m no Stephen King expert – my first foray into his books was Pet Sematary, which I read just before this year’s film came out – so if you want a fuller explanation of the trailer check out this Collider article. It is quite spoilery though, especially if you’re still planning on reading the book.

The film stars Chastain, James McAvoy as Bill, Bill Hader as Richie, Isaiah Mustafa as Mike, James Ransone as Eddie, and Jay Ryan as Ben. Bill Skarsgård is back as Pennywise. The original young cast appear in flashbacks.

Like the first film, it is directed by Andy Muschietti. It’s released on 6 September 2019.