You are here: Home / Film Reviews / IT 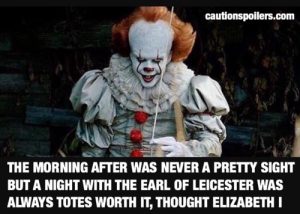 It’s October 1988 and Bill is in his bedroom making a sailboat for his little brother, as music tinkles in the background. Though it turns out that this isn’t the soundtrack,  but their mother playing her piano. What isn’t really real turns out to be there, in the house, after all.

IT is a very good movie but the initial scenes with little Georgie, the young boy who goes outside in the rain to sail his paper boat, and is then pulled by the evil clown into a drain to his death, almost broke me.

Watching him lying on the soaked ground screaming after his arm has been bitten off, just before he is dragged away, had me sobbing. I’ve got my own cheery little boy who wears a yellow raincoat and though I don’t believe in the supernatural and I favour a rather no-nonsense form of parenting, he’ll be inside with me and an iPad for a few days.

Fast forward a few months to the following summer and school is breaking up for the holidays. Disappearing children may be the Derry kids’ main worry, but just because a demonic child killer who feeds on terror is on the loose doesn’t mean all the other problems of growing up disappear. And on top of the usual issues around school, parents and puberty, all the children who make up what they eventually christen the Losers Club have other major problems in their lives, leaving them with little control and much to fear.

There’s still a buoyancy and cheerfulness to the group of kids that is infectious, though local bully Henry (Nicholas Hamilton, looking like a young and mulleted Kevin Bacon) and his band of thugs mean that cycling round town or through the woods on their bikes isn’t risk-free for friends Bill (Jaeden Lieberher), Richie (Finn Wolfhard), Eddie (Jack Dylan Grazer) and Stan (Wyatt Oleff).

It’s through Henry’s bullying that they meet new boy Ben (Jeremy Ray Taylor), and in turn Bev (Sophia Lillis), name-called as a slut round school and town, and home-schooled outsider Mike (Chosen Jacobs). There’s strength in numbers, but their quickly-formed friendship is also remarkably cohesive, as they help Bill find out what happened to Georgie, an incident that has left the boy wracked with guilt and grief.

But they can’t be together all the time, and Pennywise (Bill Skarsgård) targets each child with horrifying visions and visitations that are both unreal and grounded in physical reality, from a headless body chasing Ben round the library basement to Bev’s blood soaked-bathroom that her dad can’t see, but still needs elbow grease to clean up.

Georgie isn’t the only child to go missing from Derry. Little Betty Ripson has vanished, leaving her sneaker behind to be found in the drains, name written in capitals inside, and more Missing posters are going up all the time – so many that they are simply stuck over the pictures of other vanished, almost forgotten children.

Derry is a predominantly white town of wide roads, extensive underground sewage tunnels, hidden wells and mostly-absent parents. There’s almost an inertia there as attempts to find missing children seem to be limited to appeals on lampposts. Where are the angry protests outside the town hall? The demos outside the local police station?

Then again maybe the town’s devastating history of child death and disappearance has created a sort of fatalism among adult residents. And many of the ones that are visible we wish weren’t, from Bev’s rapist dad to Eddie’s mum who appears to be suffering from Munchausen’s by Proxy.

It is Ben who finds out about Derry’s awful history. Initially friendless, he’s spent much of his time in the local library researching the town and its dreadful disasters, often involving children. And it is Ben who works out that the extraordinarily high rate of deaths and disappearances are a phenomenon that happens every 27 years.

Pennywise is using the sewers and storm drains to move around the town, so when the Losers Club aren’t playing in the woods and rivers and avoiding Henry, they are having to venture into the network of dank, dripping tunnels. The grim, boarded-up house on Neibolt Street seems to offer answers too, and the children explore the dust-covered, darkened rooms with more bravery than I would, only to be separated by Pennywise as he tries to pick them off, terrifying them with clown dolls and coffins and then himself.

IT is both a horror film and a coming-of-age drama, and their fears attack them from all sides. Stanley is preparing for his Bar Mitzvah under his rabbi father’s critical eye. Bill has to deal with his brother’s disappearance and is also feeling the first stirrings of young love. Mike is an orphan, a black child in a white town. Ben is the new kid but also very overweight. Bev is sexually abused by her dad. The only difference is that despite the familiar puberty tropes (Bev is starting her periods) the monster they face isn’t allegorical – Pennywise is real and has to be physically as well as mentally fought off. Children really are disappearing and dying.

The child actors are superb, particularly Sophia Lillis (who is both extraordinary and luminous), Jeremy Ray Taylor and Jaeden Lieberher. And with both Bill and Ben crushing on Bev, they could teach adults something about managing a situation where friends both fancy the same girl. There are some good jokes along the way, including one about Bev’s undeniable likeness to Molly Ringwald. The film is slightly too long though, dragging a bit at times. And Pennywise’s motivations didn’t seem particularly clear (beyond general demonic evilness) if you haven’t seen the earlier version or read the book.

IT certainly stays with you particularly as a parent. (Did I tell you how much the scenes with Georgie affected me? Did I?) And it reminded me how rarely I bother to name-tag my children’s clothes and shoes.

But is IT scary? I didn’t find the later scenes that frightening, though the terror of the children and their conquering of their own fears as they face their adversary is extremely well done.

Pennywise is a scary sight though, grabbing victims first with promises of balloons then with row upon row of horrifying sharp teeth. With that red clown wig, white face and grubbily ruffled white outfit he looks like an undead Virgin Queen.

And there are enough horror staples that haunt our dreams (trips down to a shadowy basement, haunted houses, darkly dripping tunnels, violent bullying) that will resonate. Even as adults, we still have our own fears to overcome.