You are here: Home / Trailers / First Captain Marvel Trailer – Old Ladies, Don’t Get On Her Bad Side! 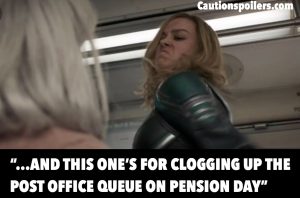 Yes a sweet old woman has really pissed Captain Marvel off. So much so that the superhero punches her on a train. Only she’s not really a sweet little old lady, but almost certainly a Skrull, a shape-shifting villain.

Or maybe she is just a sweet little old lady and Carol is still cross about 20th century baby boomers pushing up house prices. Or she’s been sent from the future to stop shopping trolleys developing funky prints and becoming fashionable, so every shopping trolley owner has to die.

I don’t know much about comic books and superhero back stories but from this trailer it looks as if Brie Larson is going to be amazing.

Captain Marvel is set in the 1990s, and sees Carol Danvers’ superhero caught between two warring alien factions while looking amazing, a bit like me when I’m hosting the playdate from hell. She seems to have only snatches of memories, if they are memories.

Jude Law also appears, and seems to be getting younger. Samuel L Jackson as Nick Fury is de-aged in the trailer, and maybe Law’s character Mar-Vell is too (he was the original Captain Marvel). Or perhaps Law’s been at the fillers.