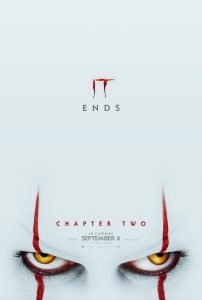 “I dreamt of you, I craved you, I missed you!” That’s the kind of thing I say while staring at the giant bar of Galaxy chocolate in my fridge when I come downstairs in the morning; it’s certainly not what you want to hear from Pennywise, 27 years after you last escaped his clutches.

I’ll confess I’ve only watched this second and final trailer for upcoming horror IT: Chapter 2, once as that was all I could bear.

“Twenty-seven years after the Losers Club defeated Pennywise, he has returned to terrorize the town of Derry once more. Now adults, the Losers have long since gone their separate ways. However, kids are disappearing again, so Mike, the only one of the group to remain in their hometown, calls the others home.

Damaged by the experiences of their past, they must each conquer their deepest fears to destroy Pennywise once and for all… putting them directly in the path of the clown that has become deadlier than ever.”

The film stars Chastain, James McAvoy as Bill, Bill Hader as Richie, Isaiah Mustafa as Mike, James Ransone as Eddie, and Jay Ryan as Ben. Bill Skarsgård is back as Pennywise, and the original young cast appear in flashbacks.

Like the first film, it is directed by Andy Muschietti. It’s released on 6 September 2019. (You can watch the first trailer here.)

Watch the new trailer now and scroll down for images: