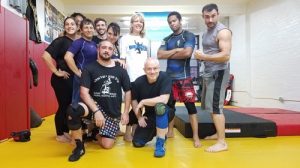 I spent four EXHAUSTING hours in a comfy chair in Breakfall Studios’ Manhattan gym, watching superfit stunt performers training: backflips, cartwheels, throwing themselves to the ground and practicing disarming each other with prop weapons.

Everyone was lovely and if I ever need to be thrown out of a window, or have a bottle smashed over my head, I know who to call.

Find out below how the stunt world works in my interview with Stephen Koepfer and Paul Varacchi, who set up and run Breakfall Studios, below.

From hustling to get your name to the right coordinator, to safety, and whether the Academy will EVER introduce a stunt coordinators’ Oscar – Stephen Koepfer and Paul Varacchi.

1, What does Breakfall Studios do?

Stephen Koepfer: Breakfall started just over two years ago as a free open training group for NYC-based stunt professionals, but has slowly grown in scope to offering workshops, renting space to productions for rehearsal, offering fight choreography services to productions and we have even begun producing projects ourselves. Our long term goal is to become a facility that offers a variety of services from training through production.

Paul Varacchi: We’re trying to give stunt professionals the skills they need to get as much work as possible.

2, How do you get yourself and your team in front of stunt coordinators?

“The process of getting on a coordinator’s radar is called ‘hustling’… The timestamp on failure is longer than that of a successful hustle, so tread carefully” SK

Generally the process of getting on a coordinator’s radar is called “hustling.” Even the creation of a group like Breakfall can be a sort of hustle, as it is a small community and word travels very fast. Of course the best way to to get work is by doing great work and letting word of mouth do it’s job. But, especially for rookies, getting the work is the trick. In order to get work, you need to hustle.

Having said that, hustling can be risky prospect. One never wants to harass a coordinator, over do it, or act in a disrespectful way. Research is critical. Find out about the coordinators; who appreciates hustling and who does not. The timestamp on failure is longer than that of a successful hustle, so tread carefully.

In the end, coordinators are extremely busy and responsible for the safety of a great many people, sometimes juggling several productions at once. They may not appreciate a suprise visit to the set. So the best “hustle” is to use many avenues to get your name and skill set out there in the community for coordinators to consider.

PV: We all hustle and do out best to have coordinators notice us. But this is not easy and just because a stunt coordinator likes you doesn’t mean he can use you. The stunt world is very small so one coordinator will reach out to another to find out what they think of you.

3, Once you’re known to a certain stunt coordinator do they tend to go for people they know on subsequent shoots or are you only as good as your last stunt? 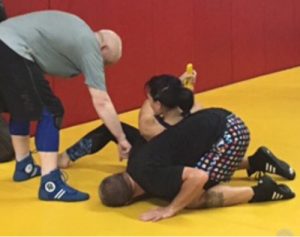 SK: Yes, like all professions, people work with who the know and trust. Especially in this profession where lives can literally be a stake. Getting into the business is a very slow burn as you build that trust and reputation as a professional.

If you do a sub-par job, claim to do a gag you can’t do, show lack of set etiquette, come unprepared, or even worse, jeopardize a production or someone’s life, you likely won’t work again or for a long while. Word travels very fast in this small tight-knit community.

PV: Most stunt coordinators do have a core crew they bring along with them. But not all stunt people can do everything. Just because you can do parkour doesn’t mean you can use a gun. You may have a great martial arts team but that doesn’t mean you can give them guns and have them tactically clear a room.

4, In terms of performing stunts, how long can you go on? Is there an unofficial age cut-off point?

“there can be a shelf life on taking hard hits to the ground, but good stunt drivers can work a very long career” SK

SK: That really depends on what stunts you are talking about. For example, there can be a shelf life on taking hard hits to the ground, but good stunt drivers can work a very long career. There are lots of facets to the stunt profession and each has it’s own considerations. In the end, regarding physical stunts, performers are no different than any other professional athlete. The better and more professionally you treat your body, the longer your career will be.

5, I see a lot of mentions of SAG-AFTRA. Is that a stunts/actors union? Do you have to be a member to work on set and if so how do you get to be a member!

There are people who get in because they possess a unique needed skill for a certain production, but they may not work again for a while till they build up their expected skills or fighting, falling, etc.

PV: In order to work a union gig you need to be in the union. Getting into the union is a funny topic that will make most roll their eyes. It’s a big Catch 22 – you have to be in SAG to work on a SAG production but you don’t become eligible for SAG until you have worked three union jobs that provide you with vouchers.

6, There seem to be more and more accidents reported on set involving stunt people – why do you think this is happening? Is it greater awareness of the industry so more reporting, or bigger, bolder stunts that are riskier?

“it is a huge concern that the stunt coordinators, who are responsible for maintaining safety for the cast and crew, do not have the final say on who gets hired to perform stunts” SK 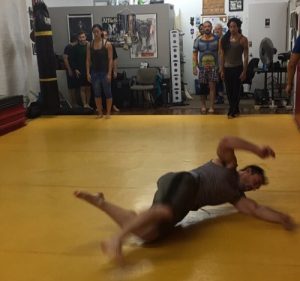 SK: I think it is a bit of everything. There is definitely more reporting on the industry by the media, so more people are hearing about these unfortunate events outside of the community.

But, there are other factors at play that can affect safety on-set including a lack of criteria outlining the professional qualifications of a stunt coordinator they hire; a producer’s ability to override a stunt coordinator’s choice of performer, even at the expense of skill level; turn around time concerns leading to excessively long work days; and the churning out of productions at ever rapid rates.

In the end, it is a huge concern that the stunt coordinators, who are responsible for maintaining safety for the cast and crew, do not have the final say on who gets hired to perform stunts, are working 15 hours a day or longer (at no increase in salary!), and are being pressed to do increasingly exciting action under the pressure of shorter and shorter production deadlines.

7, Do you think they will introduce a Stunt Coordinator Oscar any time soon? It seems like you can get one for most things on set nowadays.

SK: I would hope so, but it seems unlikely. Stunt performers are a minority in the union and profession. Our voice simply may not be loud enough to make the bigwigs at the Academy pay attention. It seems illogical that special effects, make-up, wardrobe, etc., can all be recognized by the Academy, yet stunt coordination is not.

PV: I hope they do introduce a oscar for stunt coordinators and think it’s crazy they don’t have one. But just for stunts? I don’t think so – we are the unsung heroes of movies and we are not here for recognition. But a coordinator is a different story. Give them an Oscar!