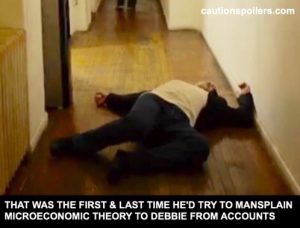 “We are the shadow warriors”, says stuntman Mack Kuhr in this fascinating documentary short from directors Stephen Koepfer and Matthew Kaplowitz. A comment which pithily demonstrates how vital they are to a film while staying in the background, not only allowing the star to shine, but giving them that added sparkle.

I’m not one for deliberately causing myself pain, though I admit I’ve toughened up since having children – seven years stepping on Lego in the dark does that to a woman. But if like me the nearest you get to movie stunt work is falling over the cat while pretending to be Sandra Bullock in Miss Congeniality when coming in from a drunken night out, you probably really need to see how it’s done properly.

I’m always fascinated by behind the scenes film stuff. I’ve never been to a proper film set (I don’t know why, invite me now! I bring homemade cakes!) though when I was younger our family home was used as a location for one of those North East-set TV dramas involving pretty shop girls, bicycles, bounders, heartbreak and coalmines. Sadly I don’t remember any stunt people – I think the nearest we got was an actress hiding under our enormous dining room table while a simulated World War 2 air raid went on noisily around her.

This short film is about the growing stunt community in New York, a city that’s becoming ever more important to film makers and TV shows. It’s a different world to LA where everyone drives – in NYC the infrastructure means everyone is always on the subway. Stunt performers in New York are a small yet cohesive tribe, and on a set you’ll almost always know someone.

The world of the stunt performer is indeed a shadowy one, where if you’re visible something has gone wrong. There’s little recognition, and the stunt man or woman’s job is to make the situation look realistic and the star look good while leaving their own egos at the door (one of the stunt performers says “when it comes to stunts vanity is not in my vocabulary”.) Equally they don’t want to be pushed aside (metaphorically speaking – of course they literally do get pushed aside, or downstairs, or into a lift shaft, anywhere really, where there’s quite a drop).

Preparation is key (the stunt co-ordinator is their boss, not the film’s director) with fight scenes are choreographed like a dance (coincidentally ballet was my initial thought the first time I saw the shooting scenes in John Wick). Once you get to the set everything should be planned and in order – poorly planned stunts can kill.

The to-camera interviews with stunt performers on how they found their way into stunt work are really interesting, particularly Anthony Hoang’s witty description of his Vietnamese parents’ reaction – after they’ve crossed oceans in a little boat to make a better life for him – to his decision to become a clown.

We also get to see stunts in action – The Rescue, by Frederico Berte, is an even shorter film within this short film. A woman (British stunt performer Hannah D Scott) tackles various bad guys as she makes her way up through the different floors of a typical New York building, to rescue her pet rabbit. We see the falls and punches but it’s obvious they’re not “real punches”, until the sound effects are added and suddenly it is completely realistic as she throws her attackers to the ground. (Don’t mock the premise, remember how many people died in John Wick over a puppy – and I reckon most women would be more likely to kick the shit out of someone for a floppy-eared fluffball than for their significant other).

If you get the chance to see Concrete and Crashpads, it’s well worth a watch – whether you’re a martial arts aficionado, or you just enjoy finding out how films are made. It’s also great to hear so many women talking about the industry. The problem now is that now I’m going to spend all my time while watching films trying in vain to spot the stunt performers, while simultaneously hoping I don’t.

See the trailer for Concrete And Crashpads – Stunts in New York here.