“Stunt coordinators are so creative – they are given new things and they just have to figure it out for themselves how to make it work… and still find a safe way to do it.” Ilyana Eberhardt, 24 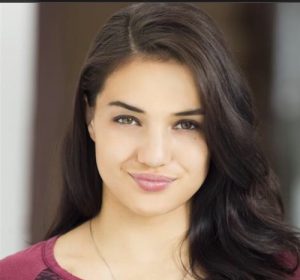 1, What was your first experience performing a stunt on screen and what other shows have you been in?

My first stunt for film was for V/H/S/ 2. They found me one day and I was able to move really well, so they walked me through my first stunt and I just fell it love with it. I didn’t know it was a career path I could take but I ended up loving it.

2, How old were you when you did your first stunt onscreen and can you remember how it felt being on set for the first time?

I was 18! It was overwhelming. I didn’t know what crafty [the snacks and drinks service provided to craft departments and others on set] was, I didn’t know what any of it was, I was just really grateful to be there and have a lot of fun.

3, Have you got a favourite stunt?

I think probably my favourite was when I was still performing in live shows and I did a 30 foot high fall – which isn’t all the high now, but at the time it was very high for me. That was where I felt the most accomplished. I had to do it three times a day for eight months straight, sometimes seven days a week.

4, How much stunt training do you do?

For a live stunt show they train everyone for about a month for maybe 6-8 hours a day, five days a week. For regular training I try to go to the gym for an hour to two hours a day and I come to Breakfall Studios whenever I can.

5, Where do you want to end up career-wise? Still performing stunts on film and TV? Working as a stunt coordinator?

I would love to do both! I would love to keep doing stunts and coordinating would be nice as well. Coordinators are so creative – they are given new things and they just have to figure it out for themselves how to make it work and keep everything progressing; how to make it bigger and better and still find a safe way to do it. That’s very impressive to me and I want to be able to do that.

6, Have you worked with any female stunt coordinators?

I have not worked with a female stunt coordinator yet but I really want to. There are some around. Definitely not as many as the male coordinators but they are trying to build up their names.