You are here: Home / Interviews / Interview With A Film Subtitler – Accuracy, Action, and Oldboy

“I subtitled one of the Rambo movies for broadcast and I think that had about 100 lines of dialogue so that was a pretty fast job!”

Without a talented subtitler, whole swathes of foreign films would either not be available or would, literally, say something else entirely. 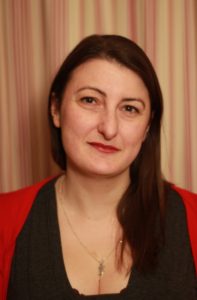 Watching a subtitled film can be something of a forced pleasure for me as I have to slow down, and concentrate. But then I start worrying: are those words what the actor is actually saying? Has the nuance been retained? Is it actually the same film, once the screenplay is translated, as the writer and director originally made? And then I think “Arghh, Dae-su is eating a LIVE OCTOPUS!” Speaking of which, meet the woman who subtitled Oldboy…

Writer, editor and playwright Tracey Sinclair worked for some years in London subtitling TV shows and films for broadcast and DVD release. Already a film lover, her job pointed her towards new genres of film as well as being a window into one of those shadowy film industry roles we don’t often hear about.

Sarah: How did you get into subtitling?

Tracey: Like pretty much every job I’ve had, I sort of fell into it. I worked for the BBC in Glasgow and a friend worked in their subtitling department, and she suggested it as a good job for someone with my editing skills. When I moved to London I applied to a company that did hard of hearing (HOH) subtitles for broadcast, and after a few years there, I moved to a translation company, where I primarily worked on foreign films.

Who writes the subtitles? And were you ever allowed any leeway in terms of amending copy?

That depends on the client, format you get the film in, etc. But we were allowed significant leeway, as often films would have been cheaply or poorly subtitled on release and so the original subtitles were very poor, so a lot of our job would be to fix them.

This was especially true of older, cult movies, released at a time when people were more interested in the action and less in the dialogue, like early John Woo or Sonny Chiba – often on those, the original subtitles bore little or no relation to the dialogue so we would completely re-do.

The dinner party question! What preconceptions did people have when you told them what your job was?

The main one is that most people’s ideas of subtitling are based on the faux-pas you see on the news! Live subtitling is only one part of the process (and it’s incredibly difficult, so no wonder they make so many mistakes!). Even when I explained what I did – which was originally hard of hearing subtitles rather than translations – people assumed you simply typed what was being said, when in actual fact it’s much more technical than that. It involves a lot of editing, and technical expertise, matching subtitles to shot changes, and the like. 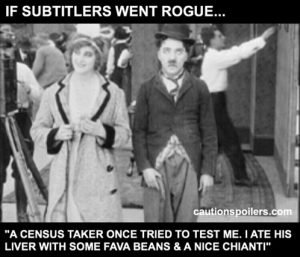 The other misconception is that I am fluent in other languages, when I can barely string together a sentence in high school French.

At what stage would you get the film? When it was fully completed and about to be released?

That very much depended on the film, and the client. Working for TV, often films were bought in with their original subtitles, which would be edited for house style or to match new edits for the films (I spent a long time both putting in and taking out swearing for pre- and post-watershed broadcasts!).

In the translation company, sometimes you would be re-subtitling for UK DVD release or TV broadcast.

Can you briefly outline the process? How automated is it?

You can buy specific subtitling software and it’s become much more automated over the last few years – particularly to bring costs down, as it’s quite a labour-intensive process – but there’s still a lot of skill involved. For hard of hearing subtitles, sometimes these are done from scratch, which is basically watching the whole movie/show multiple times, and typing and editing the subtitles then having someone else review them – or you’d edit an existing file to match whatever style guide the programme or film fit into, since different broadcasters and DVD companies have different house styles.

With foreign films, we’d usually get an existing translation or subtitle file – often very rough – then a native speaker of that language would work with a native English speaker to ensure the subtitles were accurate, read well and were technically correct in terms of shot changes, style, etc.

Were you allowed to choose which out of any available films to subtitle or were they just allocated to you?

Generally allocated as and when, though in the translation company we had a bilingual Cantonese speaker so she handled all of those films, which I just cast a fresh pair of eyes over when she was done for typos, and I tended to handle the Japanese, Korean and French films, which she or other people in the department would then check.

Does subtitling miss out much? ie did you ever watch a really long scene with loads of dialogue, see the a short subtitle you were supposed to add and think “what?”

Generally, in Asian movies, it’s actually the other way around. Asian languages are incredibly concise, nuanced and precise, so someone would say two words that it would take you a whole sentence to translate. In European languages, including English, you did have to cut a lot, otherwise the subtitles would simply be on screen too fast to read. I think I only really noticed the disparity on French movies, where I have an understanding of the language, so could see what was cut.

And we worked very hard to ensure the ‘sense’ was correct – for instance, if someone swore, we’d check with a native speaker how strong that swearing would be considered, or if they used slang, what it denoted. Subtitling is like translation – as much an art as a science.

Were all the movies you subtitled rated?

Most were, though I did some for festival release which weren’t.

I’d quite like to see John Wick given some Bill & Ted subtitles, if I’m honest. Would it be possible for someone to accidentally subtitle the wrong film?

In theory it would be quite easy to show the incorrect subtitling file alongside a film, especially on TV, but that very rarely happens!

Did your job mean you got to see films before they reached the big screen?

Sometimes, though more often it was seeing films that had got limited or no release in cinemas, but were being released on DVD or shown on TV. Sometimes we worked on remastered classics, too.

What happened if it was a film you found frightening or disturbing, or generally offensive? Or was it very much a technical job and the subject matter wasn’t really an issue?

Generally, you just had to work through it, though sometimes it did cause issues – often you would be working on films that came with no guidance, so it was easy to get a nasty surprise. Mostly, you were just expected to be sensible and take plenty of breaks, and working in teams meant that other people would sometimes help out if something got too much for you or you had a particular sensitivity around something. 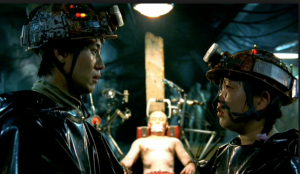 Save The Green Planet – “bonkers”

I have a real tooth phobia, so the torture scene in Oldboy had to be done by someone else, even though I did the rest of the movie – and all the extras and commentaries! I think the worst I suffered was cumulative fatigue – I did one of the first films about Rwandan genocide then a movie about the Holocaust in quick succession, and that was very upsetting and took a lot to shake off.

At your suggestion I’ve just watched and reviewed Oldboy. Did you like Korean cinema beforehand or was it subtitling that opened your eyes to this and maybe other genres?

I’d always enjoyed French films, and liked Japanese and Hong Kong film-makers before then, but Korean cinema was an unknown quantity to me, and I’m a huge fan now. Subtitling definitely opened my eyes to new genres, and also a lot of classics, since we worked on a lot of rereleases.

Again regarding Oldboy, I loved how the deadpan nature of the humour meant it worked incredibly well with the subtitles. Were there any films you subtitled where you thought “actually this type of film just doesn’t work with subtitles”? Would you ever think dubbing would actually be better? I’m thinking particularly of some comedies, and getting across emotion.

I’m not a fan of dubbing – I think it muffles the nuance more than subtitling, though obviously I think it should be an option, as not everyone finds subtitles easy to read – but I actually think subtitles work across all genres.

One of my favourite films is the French romantic comedy Romuald et Juliette (which has the terrible – or maybe magnificent – US title Mama, There’s a Man in Your Bed(!)) – which I didn’t work on, and I think the subtitles worked fine. I also worked on bonkers Korean movie Save The Green Planet, which is very funny, so I think as long as you have a good translator, anything can be subtitled.

And as part of that could you, when subtitling, actually appreciate the film or was it very much looking at a scene and adding the text to the right scene then moving swiftly on?

You generally spent a lot of time watching and re-watching a film, so in some ways it spoiled it – some films don’t really stand up to that level of scrutiny! – but in other ways it actually enhanced your appreciation, especially a film where the cinematography or acting was very good.

16 Years of Alcohol – poetic and tragic

I remember watching the Scottish 16 Years of Alcohol, which I subtitled for the hard of hearing, and I suspect if I’d seen it in the cinema I’d have forgotten it quite quickly, but watching it slowly meant I got to savour its poetic, tragic nature and I loved it more.

I also suspect I’d be bored by a film like Ozu’s Flavour of Green Tea Over Rice in the cinema, but working on it made me appreciate its slow, considered nature. Generally, I enjoyed most of the films I worked on, and it was a really enjoyable job.

How long did it take to subtitle a typical movie?

I left the job a few years ago, so it’s likely a lot faster now – and again it would depend on the film, the amount of dialogue, whether you were doing from scratch, client style guide etc, but easily upwards of a day or two. When I worked on DVDs that had a lot of extras, like commentaries and special footage, I could easily be working on one film and its accoutrements for weeks on end!

Then again, I subtitled one of the Rambo movies for broadcast and I think that had about 100 lines of dialogue so that was a pretty fast job!

Can you watch a subtitled movie now without looking for typos!

God, no. I’m a nightmare. Nobody wants to watch subtitled movies with me.

Tracey Sinclair is a copywriter and editor, and a performed playwright. You can follow her on Twitter @thriftygal.

Tracey is the author of eight books including Doll, The Bridesmaid Blues, Dark Dates and short story collection No Love Is This.