You are here: Home / Interviews / Interview With Actress Zoe Cunningham From Breathe Easy

British actress Zoe Cunningham plays Nicola Johnson in collaborative indie film Breathe Easy. Nicola works for LDN Network, and though she starts off as the calm voice of authority, hand-holding us Brits through the unfolding apocalypse, soon she’s slightly cracking up, in a tiara (which reminds me, I really need to sort out my own end of days outfit. No need to let standards slip).

Newsreader Nicola Johnson, helping us through the apocalypse

Zoe talked to me about working on Breathe Easy, the difference between indie and studio filmmaking, and which classic book should NEVER be used as toilet paper, no matter how bad things get.

1. How did you get involved in Breathe Easy and what drew you to it? Was it the story, the filmmaking approach, or a bit of both? And did you already know Paul Mackie? (Everyone seems to…)

Paul is very active on Twitter and had retweeted some of my film tweets and followed me, so I followed him back. Then one day I saw his post asking for an actress to self-tape some scenes and I thought “I could do that!”. I was in a play at the time and we (the cast) were discussing how work breeds work and I said “I just got cast via Twitter today!”.

2. Low/micro budget indie filmmaking is always going to be more collaborative than studio filmmaking (though not always to the extremes of Breathe Easy). Is that collaborative approach something you particularly enjoy? Does the better-funded approach where you only have to worry about one job appeal, or would it be hard to leave that everyone-pitching-in method of working behind you?

This is a really interesting question. I’ve been involved in producing a few films, including the segment for Breathe Easy and it’s really easy to long for a set where everything is done for you and you can just focus on your acting. However, it’s also fantastic to have that level of input into the production and to really feel like one of the team – I don’t think I’d enjoy being shut away in a dressing room on a my own. (Although I do like it when people bring me things – see the answer to question 5 :)).

The efficiency of indie film means that you really can get a lot done without needing a massive budget. In both cases it’s always the team that makes it, and as long as I’m working with a great crew then I’m happy!

3. Come the apocalypse, I can’t imagine a more accessible newsreader to talk us through to the Other Side than your character, LDN Network presenter Nicola Johnson. As a listener who would you like to hear on those last news messages, or an updated Protect And Survive type information film?

I don’t think you can get much better than “Everything is going to be OK” said calmly and clearly in an RP accent.

4. I really felt for Nicola when she had to decide which classic novel to use as toilet paper as the news studio amenities shut down. NO ONE should be put in that kind of position. That said, which book would you never ever ever use for that purpose, no matter how desperate you were? (A proper novel or non fiction book – sorry, you can’t choose the SAS Survival Handbook, or anything by Nigella Lawson).

I think I would find it pretty hard to use The Lord of the Rings as loo roll. Plus it’s a great book to have in an apocalypse as it’s so long, and if the Tolkein scholars that I come across online are anything to go by, there is a lot more depth to it than I have previous uncovered – I could while away a good few decades drawing out the Elven bloodlines.

“they made me a water bottle with my name on it”

5. Some indie films are made with such tiny budgets. What’s the difference on a typical shoot day between an indie film and a commercial film / TV / advert set? On an indie are you rushing round doing several jobs before you even get to say your lines, or by that stage in production are the set-ups pretty similar?

So here’s a comparison. On our Breathe Easy shoot we had a small team (director, DP, gaffer, sound, makeup and some extras) and our lunch was self-made sandwiches and pizza bread from Sainsburys although we did also have croissants, fruit, biscuits and crisps (you can get a lot of food from Sainburys for £50!). I recently shot my first commercial: the Arnold Schwarzenegger advert for the FCA. We had a table full of breakfast food, plus a cooked option (I had scrambed eggs, tomato, smoked salmon, avocado and spinach) and rare steak, roast potatoes and sticky toffee pudding for lunch. Oh and a coffee cart that made gourmet coffee on demand.

The crew was so large that I didn’t know what they all did, and even though I had a tiny part the second AD checked on me every thirty minutes to make sure I was OK, and they made me a water bottle with my name on it. When I forgot my shoes after a break, someone went back to get them for me! On indie films I often end up acting as a runner while I’m acting, even if I’m in the lead role! 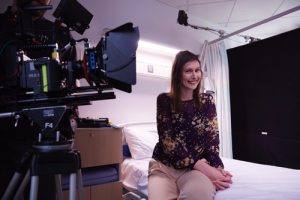 6. I loved Symptoms, the short film you were in last year. Last I heard, you were heading various film festivals with it. How did it do in the end?

Symptoms has done really well, thank you for asking! We’ve now won four awards (the Grand Jury Award at the Alaska International Film Fetsival, Best Screenplay at the Indian Cine Film Festival in Mumbai, The Award of Excellence: Women Filmmakers from The Accolade Competition and Best First Time Director at the Los Angeles Film Awards) and been selected for fourteen film festivals.

I’m off to Marbella in a couple of weeks to watch it live, plus it’s also screening at Shorts on Tap and Sanford International Film Festival in October. If you can’t make one of those festivals then it’s now viewable on Amazon too!

7. Stopping the cheeriness for a moment, how would you prefer society to collapse, were such a thing to happen – in a blinding flash, via a terrible disease like the Black Death, an alien attack, or zombies?

Black Death has got to be the worst option – pain and disease and no upside. Blinding flash might be efficient, but I think personally I’d go for zombies or aliens  – or maybe zombie aliens? At least you get to feel like you’re in a film, and I’m an optimist so you never know, we might win!

8. What have you got in the pipeline next?

I’ve got quite a lot on at the moment. I’m rehearsing for a play, we’re in the final stages of making a pilot for a TV Series directed by Marianna Dean, who directed Symptoms, and written by the fantastic writer Tracey Sinclair produced in conjuction with Pia Pressure, and I’ve got plans to shoot a short film at Christmas and a sci-fi feature with the talented David Woods next year. It’s a very uncertain world though and I’ve found that the best way to have something happen is to have LOTS of projects on the go rather than putting all your eggs into one basket.