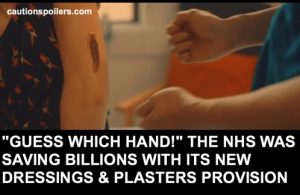 Sam (Dan Lam) is about to have his final practical examinations to become a qualified doctor – but who is faking it, him or the “patients”?

The setting is a teaching hospital, somewhere in the UK. As Sam comes in from outside he looks like any other trendy 20-something (sorry Dan Lam, I know there’s nothing worse than being told you look “trendy” by someone old enough to be your mum). But soon he’s in his hospital doctor uniform, and hospital uniforms, even if no longer the white coat, make us drop our guard, often in relief at finally having someone to tell our medical troubles to.

Sam’s practical exam requires that he see four “patients” – all actors, and all with a story to tell – and just like in real life, some tell their tale pithily and others go on and on and on and on, leaving poor Sam to pick out the important information. But he’s not just identifying the condition from the symptoms, he also has a number of boxes to tick that he’ll be marked on too – hand hygiene, consent, introductions, and patient dignity.

His patients are mixed bunch, with long-winded Ben taking so long to explain that there’s something wrong with his penis that the penis in question has most probably either cured itself by the end, or dropped off; requests for antibiotics from Stacey, presumably designed to test Sam’s “no” skills; and a pretend (and rather gruesome-looking) wound which keeps popping off, causing the actress to come out of character with a resounding “OH SHIT!”

And then there’s Amy (Zoe Cunningham), Sam’s last patient. Amy is curt and unsmiling and initially won’t even look Sam in the eye, sitting turned away from him. And it’s not even as if she’s been asked to play a curt, unsmiling person.

She’s out of character, her imaginary ailment forgotten, as she now has her own trauma to overcome. Can Sam help her? He wants to, and suggests things, even though it is Amy herself who has to point out that he can’t refer her yet as he’s not qualified.

So who is the actor in all this: unqualified Sam in his uniform, or sucker-punched Amy the seasoned performer.

Symptoms is a lovely, witty film (it’s about 15 minutes long) and Lam is great as slightly diffident almost-doctor Sam, who does everything by the book to pass his exam until someone chucks the book away and his natural empathy shines through. And Cunningham is excellent as the jarring Amy, who not only isn’t playing her allotted “exam patient” role but also isn’t playing her “nice polite lady” role, such is her shock.

Having won several awards and been accepted for many film festivals, Symptoms is now available to watch on Amazon .