You are here: Home / Interviews / And Breathe… Paul Mackie Takes Us Through The Making Of Collaborative Indie Film Breathe Easy 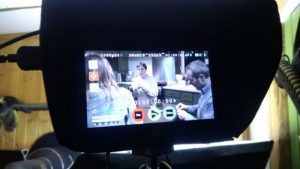 Breathe Easy is a full length feature film made collaboratively by 20 directors in 10 countries. Paul Mackie is the person behind the film and explains how the project started out, and how this international collaborative approach worked in practice. [I also interviewed South African director Stephen Nagel and actress Zoe Cunningham]

1. What was the aim of Breathe Easy? Did the idea for the process come first and then you had to find an overall story which would fit this global film making, or was the story always the main thing?

I’d written the script for the main UK section of the film and then it dawned on me that whenever you see a global crisis film, for the most part it’s just a group of people in one area that gets concentrated on and they imply that it’s global through exposition and news reports and such. The first film I produced, #DrunksLikeUs, ended up being produced in three countries: here in the UK, but with a scene shot in Buffalo New York and a narration that was recorded in Canada.

I wanted to see how far I could push that, and wrote a mission statement inviting other filmmakers to get involved in the project. We ended up with twenty directors in ten countries in the final film.

“it really was just never-ending messages back and forward, morning, noon and night”

2. How long did the whole process take from beginning to end?

It took about eighteen months but it felt a lot longer because because it really was just never-ending messages back and forward, morning, noon and night the whole time.

I came up with the idea got everyone involved and pulled it all together.  I also wrote the core segment, the news report scenes shot by Keif Gwinn, and the scenes shot in Bochum, Germany shot by Sahair Rai. I also co-directed the core segment along with Jack Eaton – I play Pete in those segments too.

“Every section was self-produced, sourced and financed” 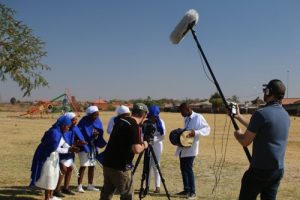 4. How much was each segment treated as an individual short film for each country? I mean in terms of finance raised, the writing, the look, the cast? Were the different directors completely autonomous?

I felt straight from the off that the only way to get people involved and invested in the film was to give them a sense of ownership of it, to give them as much freedom as possible to do their thing. So I really just wrote a list of rules about what they could and couldn’t do in their section, and let them get on with it.  Every section was self-produced, sourced and financed.

5. The different segments seem to be very much mini films in their own right, with very different tones. Some of the UK sections with the prime minster are satirical, and our young men are (understandably) mostly worried about beer running out. But the Bulgarian story about the teenagers trying to escape is very touching, and in many of the stories people are dying or children are sick. Did you always want those kinds of contrasts or is it just how it turned out with the different voices involved?

I make funny and satirical films because that’s my thing. But I always knew that the other filmmakers involved would look to the darker side of things and as such, yeah, I really wanted the contrasts to represent the ideals and cultural identity of the different countries involved.  And I think that comes across.

6. Is Breathe Easy on the festival circuit, and what has the international response been like?

It is, and for the most part the response has been very positive. I think that people appreciate the collaborative global spirit of the film in a time when most of the world’s leaders would have a hard time agreeing on the colour of grass. 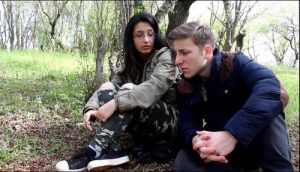 From the Bulgarian segment

7. What do you think will cause the end of the world and will you stay put with a beer or run for, well, somewhere else?

Zombies and I’ll meet you in The Winchester, obviously.

8. It was you that put in the jokes about Sunderland wasn’t it?

My global collaborative spirit can only go so far!  I take a pop at Sunderland in all my films and I really hope they don’t take it personally as it’s just a bit of banter.