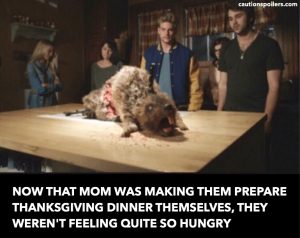 When I tire of big screen blockbusters, shark films, or Brit romcoms starring Colin Firth looking awkward, I yearn for something a little more highbrow, something intellectual -something, dare I say, art house? Maybe in French, with subtitles, and smoking. These times are not when I watch Zombeavers.

But sometimes, only “Zombeavers” will do. What’s not to love? It’s got cute furry critters, zombies, and funny teeth, all in the same monster. And like all the best B-to-Z movies, green toxic waste is involved, in this case when a canister falls into a river from a truck.

Of course no horror comedy in a cousin’s cabin in the woods is complete without some American college girls in bikinis, preferably on Spring Break and this film does not disappoint.

Anyway, Zoe, Jenn and Mary arrive at Mary’s cousin’s cabin in the woods. There is no mobile phone coverage which shocks Jenn and Zoe, but Mary makes the other girls stay so they can all have a low-tech weekend without boys. (I know. WTF?)

But something’s not right! Yes, the girls are still FULLY DRESSED! I know, that’s NOT why you paid £1.99 to rent this from Sky Movies is it. (Not that I did. Oh no. I’m just guessing at the rental price. Anyway I’ve got to go as I’ve only got till next Tuesday to finish watching it. Okay I’m back now).

Luckily for you though, the cabin is right next to a lake so the girls put on their bikinis and go for a swim. Phew. The world can rest easy. Zoe is all for a no-lines tan and takes off her bikini top. Phew x 2! All we need now is a run-in with an unfriendly local, perhaps popping in from Bigfoot film “Willow Creek” which is surely set only 10 minutes away in these same woods. Anyway, once on the wooden pontoon in the middle of the lake they spy a beaver dam so they swim over to check it out but are interrupted when they see a bear.

Backing away, they are saved by a local hunter, Smyth, who scares the bear away but then turns all hostile-local on them (phew to the MAX!) and lectures them on their inappropriate dress. (What? Bikinis are the only appropriate garments, surely. With maybe a plaid boyfriend shirt to throw over the top when they have to run through darkened woods at night).

There’s also a cute dog, one of those little woolly ones that celebs love that looks like a tampon on legs, which you know is either going to be eaten or become Zombie Tampon Dog. (My friend has one and every time I see her taking it for a walk I’m reminded to check my diary.)

So the girls head back to the cabin and as it gets dark they start hearing strange noises and bangs on the door. Heading outside, Jenn and Mary are freaked out until all three of their boyfriends appear, having driven up to the cabin to surprise them. Eventually the girls manage to all agree to let the guys stay, and Jen, still pissed off with her unfaithful boyfriend, who she has seen pictured in a clinch with an unidentifiable dark haired girl, heads off to shower. Where she is surprised, while in her bra and knickers, by a zombie beaver in the bath.

One of the boys kills it and they put it outside in a plastic bag, but the next day it’s gone. At this point they put its strange un-beaverlike behaviour down to rabies. They all go swimming except Jenn who’s being a misery guts again. (I’d probably want to snog her boyfriend after a while too, just to annoy her.) But the furry zombie hoards are out in force, and Buck gets his foot bitten off. And the poor dog… well let’s say what with this and “John Wick” I’m going to have to start a new category on this site for films where the cute puppy gets it.

Meanwhile Jenn is in the house being chased round the kitchen table by a murderous beaver, which she eventually pins down with a kitchen knife. Tommy and Zoe decide to take the car to get Buck and his bagged-up foot to hospital. But the beavers have been busy cutting phone lines, bringing down trees across the road, and gnawing the neighbours. Tommy gets beavered, but Smyth reappears to rescue Zoe and Buck and the foot.

Back at the never-seen cousin’s cabin, Jenn has grown suspiciously hideous tombstone-like front teeth (human beaver zombie hybrids look just like the unpopular kid at school). Mary and Sam hide in the bathroom and start having sex (yes! I knew it was worth the £1.99 rental that I didn’t pay). But the coitus is definitely interruptus as poor Sam has his penis bitten off by Jenn-Beaver. Footless Buck is now also a zombie, albeit a slightly slow, hopping one.

Mary and Zoe finally escape their dead, snaggle-toothed friends, driving off along the road until they meet the fallen tree and have to walk. Mary is convinced Zoe is infected but then changes herself – Zoe kills her and escapes along the road. Soon she sees the original truckers, but sadly for her they run her over. We are left not knowing whether she survives, either as Zoe or Zoe-ombie. (I know, in horror films it’s the not knowing that really hurts isn’t it). By the way at this point Zoe has had her boobs covered up for several hours.

The film is played totally straight which makes it much funnier. Pointing at a blood-filled plastic bag, Smyth the hunter asks Zoe “what you got there, is that a sandwich?” “It’s Buck’s foot” she replies, just before he offers her a chicken drumstick. And when Jenn is confronting Mary, now identified as the girl in the photo snogging Sam, the errant boyfriend – who’s sitting uncomfortably on the sofa – says earnestly, “We should not turn against each other now. That’s what the beavers would want”.

I was a bit surprised by the ending – Zoe and Mary are totally set up as the bad girls throughout the movie (Mary has had a fling with Jenn’s boyfriend, Zoe has been bitchy since the first scene, AND got her boobs out.) Jenn has been the wronged one, though she is admittedly a bit of a misery. So it’s Zoe who gets to the final scene. Which is kind of fitting – the girl who’s prepared to flash her boobs on camera in a cheap comedy zombie flick should indeed survive until the very end.