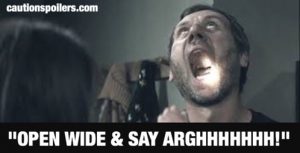 As soon as the Americans started exploring the burnt out Norwegian research station in The Thing (1982) I was desperate for a prequel to find out what happened to our Scandi friends. (I demand prequels a lot. I’m still desperate for John Wick: The Prologue. But more than that, I want to find out all about the wheeler-dealing and infighting on the local council before they got the London Tube extension approved in dragon-awakening epic Reign of Fire. )

The Thing (1982) was a very exciting film with a very boring title. Or maybe the cast got killed so quickly they simply didn’t have time to name it. But they had 29 years to come up with a title for this prequel and the best they could come up with was, er, The Thing.

And there are so many easy options! I’d have called it And Another Thing, but then that’s the way I argue. Or they could’ve called it Same Thing. Or even, in a nod to the inarticulacy of the young, Thingy.

Anyway here’s The Thing (see what I did there). I like this prequel. It’s not up to the standard of the original, but then that had, despite its use of classic horror tropes, an element of surprise and dread of the unknown. But The 2011 Thing is still a pretty good film and, considering it must have been reverse engineered to fit into the story of the original (which starts minutes after this film ends) there aren’t too many visible joins.

Mary Elizabeth Winstead (later seen to great effect as wierdo-and-alien-fighting Michelle in 10 Cloverfield Lane) plays Kate, a palaeontologist, invited to join the Norwegian team investigating a crashed alien spacecraft. Not far from the crash site is an alien creature, supposedly dead, which they remove in a large block ice and take back to their scientific research base. Her boss on the base, Dr Sander Halvorson (Ulrich Thomsen) pulls rank on her when she argues against taking a tissue sample and he does it anyway. Later on he announces the uniqueness of their find, and the team drink, sing, and play ukuleles in lovely chunky knitwear while in another room The Thing is defrosting.

Once it’s escaped, all hell breaks loose. Every time they think they’ve killed it (always when it is halfway between human and alien, for maximum gross-out effect, and always in a fireball) it turns out someone else is infected.

Poor Henrik is first to go. I really hope he was paid by the mention and not by his screen time as he gets talked about a lot after his unfortunate demise. He’s far more important after his death. Like the first film there’s a disgusting autopsy scene, this time like cracking open a lobster. Henrik-Thing is inside, his new baby flesh mid-creation. It’s Kate who realises that The Thing’s cells are mimicking Henrik.

Winstead is a very believable heroine. Her findings are fact-based but she can apply them in clever ways – she quickly realises that The Thing, while it can assimilate and perfectly mimic organic tissue, can’t mimic metal and that this is a simple way to work out who is definitely still human, and not A Thing. (Just think for a moment what metal might be in your body. Sometimes terrible British oral healthcare can actually be an asset). She also doesn’t high kick her way around the place like any number of current women action stars but uses her brain and what is to hand.

Dr Halvorson is unempathic and unemotional. Poor Henrik’s death and subsequent dissecting are hugely upsetting to other team members but for him, the absortion of Henrik is simply “fascinating. It IS fascinating”.

As a crew I found the Norwegians funnier and less cranky than the Americans in the first film – maybe as they’re used to long winters? They seem to be split (pre assimilation!) into cuddly bearded types with terrible teeth, and clean shaven, smooth blonds with teeth that are worryingly perfect. There are also Brits and Americans – including helicopter pilot Carter (Joel Egerton), who has an interesting is he/isn’t he role, and who is often a sensible block to Halvorson’s agenda.

The ironic mimicking of scenes from the first film is great fun: at one point they’re all standing outside in a circle, faces just visible under woolly polonecks and fur trimmed jackets, discussing infection and a possible blood serum test to identify humans and non humans. Oh yes and there’s a terrible storm coming and the radios are down.

Again, the rising sense of mistrust and eventual paranoia is clear – but this time there is further division as some of the team speak in Norwegian, precisely to prevent the others from understanding what’s being said. Splits are effectively being engineered by the still human humans who may have their own agenda.

Carpenter gave us some brilliantly effective and disgusting set-piece transformations in The 1982 Thing. In this they are actually stepped up a gear but are still clearly from the same organism. The creation and eventual form of The two-faced Thing (which is eventually found outside in the snow by the Americans in the first film) is probably one of the most disgusting things I’ve ever seen, and I have small children. The music also mimics that from the 1982 film, and it actually works better here. In the original there were times when the music felt a bit too pretentious and doom-laden whereas here – probably because the film is less tense – the music is more effective.

And that’s the main failing here; it isn’t quite as tension-filled as the first one. Partly because any fans of the first film (yes, all 7 billion of you) know the ending because it’s the start of The 1982 Thing – but partly because the scale is different. There is more action outside here (the spaceship, attempted escapes) where the vistas are clear and open. It creates some space around the prequel so it doesn’t seem like a remake of the first, but it also means there isn’t as much of a sense of foreboding or growing menace. Additionally Dr Sander Halvorson is meant to be the bad guy, and usually in these films such a character is an unwelcome distraction for the protagonists, forcing them to fight on two fronts – but he isn’t really fleshed out here so his sociopathic nature (he is like a cross between David the android in Prometheus and Burke, the double crossing Weyland-Yutani employee in Aliens) is rather wasted.

The 2011 Thing follows a standard horror format (I knew full well that one of my favourite early moments, when a slightly pissed, cuddly Norwegian shatters Halvorson’s portentous pomposity by shouting out “WE FOUND A FUCKING ALIEN!”, would turn out to be hubris to the power of infinity) but it is still quite effective. Despite the lack of pure tension, the relentlessness of the gore combined with the geographical isolation and the divided crew left me feeling quite battered by the end.

Unfortunately it simply isn’t as multi-layered a piece of film-making as The 1982 Thing – and as we already know the ending, it doesn’t have enough originality to make the journey to that point exciting enough.