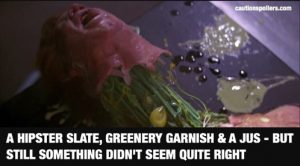 John Carpenter’s The Thing has everything – physical isolation in an antarctic scientific base, failed communication channels, a coming storm (literal and metaphorical), psychological horror as the threat grows and established friendships crumble, and really, really disgusting monsters that I couldn’t take my eyes off. There is a delightful yuck factor to The Thing’s Things. (That is genuinely what they are known as. The dog thing is, brilliantly, listed as Dog Thing in a cast list).

A Norwegian helicopter appears in the sky, with a marksman leaning out and firing at an unknown sled dog running loose. Soon the chopper lands but is accidentally destroyed, with the surviving crew member still shooting at the dog until one of the Americans from their own nearby base shoots dead the shooter. The dog survives. Two Americans, helicopter pilot “Mac” MacReady (Kurt Russell) and Dr Copper (Richard Dysart) fly to the nearby Norwegian scientific station, only to find it burnt out. Their search results in them finding a giant block of ice with the insides chiselled out, a hideously damaged body, and an even more hideous creature lying dead in the snow, charred but with two faces still clearly identifiable.

Taking the thing (they don’t know anything about it yet so my editor’s decision is that it is still the thing, not The Thing) back to the American scientific base, team biologist Blair (A. Wilford Brimley) performs an autopsy and finds perfect human organs inside. The Norwegians’ recordings also lead the Americans to what looks like a space craft in the ice – Norris (Charles Hallahan), the geologist, identifies it as potentially being 100,000 years old because of likely ice movement.

There are several “hasn’t anyone ever watched a horror film” moments, with Copper and MacReady bringing back the thing, and the stray dog later kennelled with the Americans’ own sled dogs leading to a hideous dog decimation soon afterwards.

The post-dog autopsy results in Blair surmising that the creature can perfectly assimilate any lifeform from the inside out.

As team members are picked off by (now a proper noun and therefore deserving of initial upper case) The Thing, people also disappear and reappear as they start fearing each other. Equipment is found sabotaged. Decisions are made to isolate individuals. Copper tries to work out how to identify which humans are infected and which not, with a blood serum test, but it’s tampered with – cue more paranoia. How do you protect yourself and everyone else? Isolate them? Tie them up? What if they are the ones that you need to come help you later on? What if you’re the infected one?

There are some genuinely creepy moments – when we find out that there is “still cellular activity in the burned remains. They’re not dead yet”, my spine tingled (luckily nothing shot out of it). It’s the kind of film where you study the whole scene, willing characters to turn around because a blanket is twitching. The rising sense of mistrust as people realise that anyone could be infected is palpable.

And although there is a strong element of psychological horror in The Thing, Carpenter doesn’t flinch from repeated, disgusting transformations. Considering when the film was made they really are impressive. The creatures are truly hideous. Contorted faces with just enough humanity remaining to be recognisably people, mouths twisted in screams and grimaces, eyes half popping out of sockets, gunk and gunge everywhere, bodies exploding as strange spiky legs appear mid-transformation and scuttle away… usually ending in a screaming fireball as infected Things are incinerated before full assimilation can take place.

The film is 35 years old and apart from the ancient technology it could be set today. And actually the technology is pretty impressive for its time. Yes it brought back memories of dark screens and big coloured type, and they pretty much only have computer chess to amuse themselves, but Blair is able to use the machines to estimate the likelihood of infection affecting someone on the base, and also the chances (not good, frankly) for the wider world if it ever gets out. (And let’s face it for people my age, you can’t beat a scene with an early 80s tape recorder, even if just brings back memories of pressing Play and Record at the same time to tape the UK Top 40 on a Sunday night).

The sense of isolation on the base is itself menacing, and rising distrust among the group is well-handled (by the time the action starts they have already been without communications for two weeks). Like the best horrors the actual monster is ably assisted by the humans’ reactions to the situation they find themselves in. In fact if it was slightly more evolved it could have saved some energy by only taking over a couple of dogs and everyone would still have gone loopy and turned on each other.

The Thing was a commercial and critical failure on release – it came out in 1982, the same year as ET, and I can understand people at the time wanting to watch a cute alien who you can dress up and leave with your children, rather than a Cold War-era allegory channelling our fears about communist invasion and aggression hiding in an even Colder War story involving a hideous creature that leaves victims looking like a human / spider hybrid.

But the passage of time has led to its completely reappraisal and it is now seen as a cult classic. It really is a very good, multilayered film where allegory, bloodshed and paranoia come together – and I’m much more likely to watch it again than ET, though probably not straight after eating my dinner this time.

The ending is bleak, but it has to be. As MacReady says “When a man bleeds it’s just tissue. Blood from one of those things, it’ll try to survive.”

Check out my review of the 2011 prequel, The Thing.