You are here: Home / Film Reviews / The Knight Before Christmas 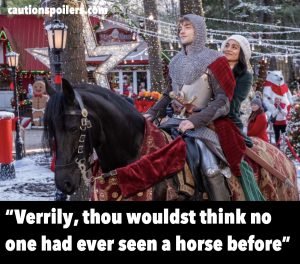 14th century English knight Sir Cole Lyons can chop a Christmas tree down in one axe stroke, which rather concerned me when I started considering what his job might be back in snowy medieval Norwich – especially when he later captures a purse thief and wastes no time telling the pickpocket exactly what his punishment would have been 700 years ago.

Sir Cole is from 1334, though he’s now in 21st century Bracebridge, a village in Ohio; and being handy with an axe isn’t his only skill. He can also bake his own bread and play the lute, oh and he’s charming and dedicated. He’s also very polite, with “wench” the most problematic utterance to come out of his mouth.

He’s there thanks to an actually very attractive Old Crone (Ella Kenion), who has magically transported him centuries in the future so he can discover and complete his knightly quest. With a deadline of midnight on Christmas Eve, Cole’s quest clearly includes unlucky-in-love science teacher Brooke (Vanessa Hudgens).

In movie terms, it sounds as traditional as Christmas pudding. But could The Knight Before Christmas – a film that so clearly began with a title and was developed backwards – pull off a Christmas miracle and surprise me?

Would Cole (Josh Whitehouse) decide to stay in Ohio, exchanging chilly castles, social standing and a high chance of dying of the Black Death for meritocracy, central heating and hot chocolate? Or would he return to England’s Dark Ages, leaving Brooke to get together with David the quite hot, hardworking single dad?

Impressively for a time travel film, Cole is intrigued rather than fazed by modern technology: the metal dragons in the sky, the mechanical steed parked outside Brooke’s front door, even Alexa (probably because he’s used to having women around to do everything for him). He’s one of those men who could fit in anywhere, even when wearing chainmail and riding a horse.

Brooke takes him home after knocking him down in her car during a blizzard; the hospital and local police think he’s amnesiac and delusional, what with his delightful way of speaking, consideration for others, gallantry and being dressed in a suit of armour.

Soon Cole is binge-watching TV, helping Brooke decorate her house for Christmas, and meeting her family, with much mental cheering on from me as I doodled holly leaves on my notepad when I should have been writing stuff about movie Brexit allegories and whether Martin Scorsese thinks Christmas films are proper cinema.

And it’s amazing how only a couple of weeks after watching The Good Liar, about a man scamming a kind lady by pretending to fall in love with her, I spent the running time willing a single woman living alone to fall for a strange sword-wielding man – while also secretly coveting Brooke’s extraordinary number of gorgeous winter coats, her gorgeous home and her wide array of gorgeous sparkly Christmas tat on her front lawn.

Despite its familiar path, there is some enjoyable tartness to offset the sugar; Cole declares Brooke’s fake Christmas tree “as contrived as the creatures that adorn your cottage”; his memories of Christmas morning are of an orange and a halfpenny left on his bed. (I lecture my own children in the same way at about 7am on the big day, as we drown in mini jigsaws, jelly beans and wind-up poos.) I just wished he’d told her to turn the heating down and put on another jumper when she was swanning round the house in tiny tops with a blizzard raging outside.

While Cole is trying to work out what his quest is (to fall in love with Brooke, you 14th century simpleton!) she learns how to make genuine 14th century bread. So much bread! Probably more gluten than Hollywood stars have consumed in a decade. Their joint dough-kneading scene is very sweet, like Ghost for the Nigella generation.

Bracebridge is the kind of place where either everyone knows one another, or the producers couldn’t afford many extras. The town’s Christmas fair harks back to a time that probably never existed, but there’s real community spirit too. David the bereaved single dad ensures his kids understand about giving back, and Brooke arranges an annual Christmas Eve dinner to raise money for disadvantaged locals.

The Knight Before Christmas looks lovely (apart from the special effects when he disappears in a puff of smoke, and Ohio’s endless snowstorm which appears to be falling horizontally). The snow-laden silver birches in the quiet medieval woods around Norwich are stunning, with Sir Cole – initially in his chainmail, armour, and scarlet velvet cloak, and later in colourful yet fashionable knitwear thanks to Brooke’s boutique-owning sister Madison – a very handsome knight.

Full of festive charm, this is sincere, if earnest, fun. It may be formulaic but it’s still engaging and often witty. And it doesn’t feel manipulative – it’s touching when Brooke and Cole open up about what their mothers had in common, bringing up their children thousands of miles and hundreds of years apart.

Cole’s acts of valour while he tries to work out his quest are low key, even when they’re important. It makes Falling Inn Love, Netflix’s doer-upper romcom where the most exciting thing that happened was a goat appearing in a bedroom, look like a twisting noir thriller.

Still, Hudgens and Whitehouse work really well together, and have lovely chemistry; medieval bon mots, compliments and advice trip off his tongue with believable ease, and while not to too stunned by selfies and fridges, retains just enough wide-eyed wonder to occasionally resemble the sweet and goofy Ted “Theodore” Logan. Hudgens is convincingly warm yet guarded as a kind-hearted woman finding out that life will buffet you whether you deserve it or not, and able to admit when she was wrong about… yes, love!

Note: There is a mid-credits scene.

Missed something? Check out my recap article.

The Knight Before Christmas is available on Netflix.

Watch the trailer for The Knight Before Christmas: