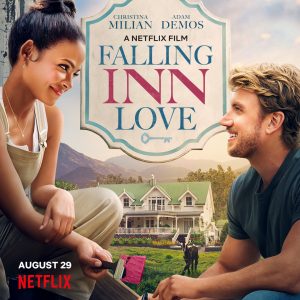 To B&B or not to B&B, that is the question – as American city girl Gabriela wins an actual New Zealand guesthouse in a competition, meeting handsome local builder Jake when she turns up to view her beautiful but ramshackle prize (which at least comes with its own goat, Gilbert).

To which I could also add, if we’re going to appropriate Shakespeare, would not a (prize-winning) rose still smell as sweet, once Gabriela has accidentally driven over it in her jeep? Or after she’s chucked a bunch of them, and the water they came in, on a smoking fireplace after failing to check the chimney is clear? Or even when Gilbert has had a nibble of one?

Yes it probably would, as this is the kind of gorgeous, friendly, isolated town with modern attitudes that we’d all like to live in. And if you need any more convincing, it turns out New Zealand has no snakes.

Falling Inn Love – and yes the clue’s in the name, French New Wave-loving cinephiles – is the daftest, fluffiest froth I’ve watched in a long time.

I’ve seen fake Mona Lisas with more originality than this, and it’s so sugary your dentist will charge extra on your first post-watch visit, but it’s still a delightful and warm-hearted experience that wears its sincerity like a badge of honour.

The refurbishment of Bellbird Valley Farm, the inn in question, seems to involve one leaky tap, some dodgy lightbulbs and a bit of light hoovering, which at least gives Gabriela (a winning if not exactly overstretched Christina Milian) time to meet the locals.

All of whom are lovely; even the villain of the piece, rival B&B owner Charlotte (Anna Jullienne) who turns out to be pretty clued-up about the emotional side of visiting a guesthouse. (I liked Charlotte – when asked whether she misses her absent naval officer husband, she looks as if she’s never even considered it, before answering “sometimes”.)

Falling Inn Love is so damn nice I found myself giggling at all the signposted pratfalls, often ropy dialogue and sometimes sitcom-level acting, and I’m the kind of person who thinks cynical romcom Destination Wedding should be a mandatory part of couples counselling before anyone actually walks down the aisle.

And I just love puns in film titles. I can’t tell you how devastated I was when Gerard Butler’s 2017 weepie The Headhunter’s Calling (about a headhunter who calls people to headhunt them, then discovers he has a calling) changed its name to the dullsville A Family Man, and how much I perked up when Missing Link turned out to not only be about the yeti but also that his name was Mr Link and he went missing. So Falling INN Love is pun-perfection.

When we first meet Gabriela she’s a hard-working and idealistic career woman trying to navigate the shark-filled waters of San Francisco, while also promoting her ideas for properly green living. Sitting on her sofa drowning her sorrows in white wine after an unexpected redundancy, yet still looking stunning in her stripy pyjamas, she enters the competition to win the B&B.

(We may be in fantasy land here but it’s always useful to identify with your protagonists, and last Christmas I won the only kind of competition prize that could have got me anywhere near a DIY project: an actual life-size chocolate brick.)

Heading to NZ to check out her prize, she’s leaving behind her boyfriend Dean (Jeffrey Bowyer-Chapman), a man who when they go out for dinner has already had his assistant order a salad for her in advance. So we know Jake is a good guy when he later tells Gabriela “salad isn’t a real dinner”, before ordering everything on the menu (and if that doesn’t get him leapfrogging Keanu for Time magazine’s Man Of The Year then who even are we).

Luckily, after being inexplicably dropped off from the bus a kilometre away from the actual town, an incident involving her wheelie suitcase, a steep hill and a bra leads to an introduction to Jake (Adam Demos). He’s very good-looking, kind, handy with a wrench and loves fixing broken things (cue lots of gubbins from his mates to Gabriela about him too being broken), so of course she spends the first half of the film avoiding him while falling over stuff.

Still, she has Gilbert the goat to keep her company, and a cast of cheery locals. Shelley (Claire Chitham) runs the town garden centre, Norman (William Walker) runs the hardware store, and married couple Manaaki (Blair Strang) and Peter (Jonathan Martin) run the café. Gilbert runs everywhere, chewing plants, terrifying her by staring into her eyes when she wakes up in the morning, and generally creating what passes for mayhem round those rather genteel parts.

Eventually Gabriela and Jake decide to team up to finish the house and flip it, between picnics and trips to buy nice plants. There’s a hint of a suggestion that previous owner Mabel Brownleas, who stares sternly down from a rather hideous portrait, may still be around in ghostly form; but this is the kind of movie where when they sledgehammer a wall out of existence it’s love letters they find, not a pile of desiccated bodies and a curse.

Milian and Demos are lovely together, his performance gratifyingly low-key and his dialogue sometimes caustic in a film populated with characters who tend to shriek while performing exaggerated arm movements. (Apparently Demos’s accent is Australian rather than New Zealand, though I’m afraid that passed me by – don’t bother emailing to berate me unless you can tell the difference between a Geordie twang and a Mackem one.)

The story suddenly injects a small amount of genuine drama at the end before spoiling it with a shot so overloaded with cheese I could go dairy-free for the rest of my life right now and wouldn’t miss it.

“I can’t quite make out if they’re meant to fall in love or kill each other” says cafe owner Manaaki fondly, earlier in the film – as I jumped up and down shrieking “I can, I can!” But sometimes, in a real world where the only certainties are ones you desperately want to ignore, a fantasy one of reliably familiar ones is exactly what’s needed.

Falling Inn Love is streaming on Netflix from 29 August 2019.

Watch the Falling Inn Love trailer now and scroll down for images: