You are here: Home / Film Reviews / The Good Liar 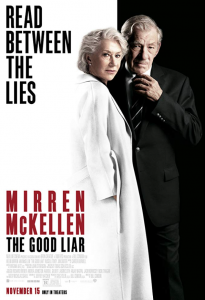 It was the hideously old-fashioned bedside lamp in Betty’s spare room that first brought me up sharp.

No way would Betty, a widow who favours silk and satin and wears an elegant dove-grey overcoat, and who collapses when new boyfriend Roy suggests a holiday on the Costa del Sol, buy that monstrosity – especially in a new house where she’d decided to start from scratch after her husband’s death.

Still, I wasn’t sure. Was that a set-dressing miss-step, or was retired Oxford professor Betty (Helen Mirren) scamming con artist Roy Courtney just as Roy (Ian McKellen) was scamming her? And if she was a scammer, was she a nice scammer getting her own back, or a criminal mastermind searching out gullible marks, who on meeting Roy had recognised one of her own?

And if she was an evil scammer, would she break into broad cockney at the denouement? Would The Good Liar turn out to be unfolding in the Fast And The Furious universe, with Betty actually Magdalene “Queenie” Shaw?

And – yes, I kept going back to it – why would anyone buy that lampshade?

Going into the cinema – and not having read Nicholas Searle’s book on which Bill Condon’s film is based – I commented to the ticket seller that regardless of whether the actual film was good, it’s always worth paying a tenner to see Ian McKellen and Helen Mirren sparring on screen. Hell they could recite bus timetables and I’d still shell out £4.50.

They are both on delightful form here: McKellen thoroughly enjoying playing a violent, foul-mouthed, narcissistic thief playing a polite, companionable elderly gent with a dodgy knee, his expression changing from snarly grimace to slightly dim smile in a millisecond; Mirren the is-she-isn’t-she sweet older lady, apparently shielded from the worst of human nature and now, apparently, looking for some gentle affection.

The problem is that it’s all a bit pedestrian until its bonkers last stand, and there are only so many times a viewer can be manipulated into muttering “oh no, Betty!” under their breath, especially as Betty is increasingly suggested as another suspect.

Movies like this are hard to assess: the decisions Betty makes (her trustingness is believable; the speed with which she gives in, and her desire for excessive returns on the fortune Roy is trying to wrest from her, less so) could be due to poor characterisation or could be entirely accurate if Betty is in fact screwing Roy over while trying to cover her own tracks and making tiny, all-to-human errors.

That said, it is a solid and entertaining thriller. And even as it descends into enjoyable nonsense, it remains engaging and even engrossing. The other audience members, all older than me, reacted noisily with laughter, several “oooh no!”s, and – my favourite – a loud “STUPID!” as Betty prepared inexplicably to hand over control of nearly three million quid to a man she hardly knew.

Betty Mcleish has quickly dipped her toe back into the dating game after her husband’s death. She lets slip to Roy on their first date that he died a year ago, and that their lunch isn’t her first foray into online dating, which will make you think either someone’s lying or “you go, Betty!” and I think you can guess which route I went down.

Roy, the dapper and smartly dressed man she meets, seems to be the perfect match.

Her grandson Steven (Russell Tovey) is suspicious of Roy from the start, and both emotionally and physically tries to wedge himself between Roy and Betty (Roy’s annoyance is a joy to behold). A history scholar studying for a PhD, Steven brings in Nazi war criminal and Hitler’s favourite architect, Albert Speer: “the closer one gets, the more one loses perspective”.

The film is set in 2009 (it has to be, as it goes back to WW2 Berlin, and both retirees are still sprightly). The first scenes ask us to decide whether the lies they’re telling on their profiles are typical of online dating, or hints of something darker: she ticks non-drinker while sipping wine at her computer, he selects non-smoker while puffing away in front of his. But doesn’t everyone lie online? I’m actually 85 and ten times more attractive than my picture on here suggests.

Roy is a career conman; after his first date with Betty he takes a cab to Stringfellows where he meets with his parter in crime Vincent (Jim Carter) and two men they’ve brought in to help them scam a group of Russians in a real estate deal. Later he brings Vincent, now pretending to be a financial adviser, to Betty’s home to persuade her to merge their assets in one investment account.

Her beige house looks like it’s been done up by a suburban Kelly Hoppen; though her fridge is always well-stocked with champagne. Nice Roy in his flat cap and beige raincoat is full of cliches, life always declared to be “tickety boo!”

Despite my criticisms of The Good Liar, both the ease with which Roy convinces Betty, and the size of her fortune, are entirely believable. Intelligence doesn’t equate to nous. University academics of Betty’s generation, while never well paid, often benefited from lump sums and final salary pensions, and she and her husband owned a house. It’s a different world compared to younger people now, scammed not by individuals, but societies which systematically reduce reward in the name of freedom.

The Good Liar likes its historical metaphors; she and Roy decide to visit Berlin, and specifically the Brandenburg Gate, a symbol of reunification, the coming back together after decades.

Steven’s digging into Roy’s background there is enlightening for us, as Roy’s present unravels with the revelations about his past; though these revelations feel underwhelming, even with flashbacks.

Partly it’s because Betty is, by now, apparently suffering from an emotional dose of sunk cost fallacy (where you’ve invested so much you decide to keep going rather than cut your losses), making her more likely to turn on Steven and forgive Roy his past indiscretions; partly it’s simply lacklustre filmmaking.

The Good Liar is thin but quite satisfying in the end, the karma of the past catching up – if only history righted itself like that in real life. Despite its flaws it’s a highly enjoyable 100 minutes, watching four top performers wring every conceivable expression, every tiny knowing pause, from every twist.

Maybe I too am beholden to the sunk cost fallacy? Impossible! To quote Evil Roy, The Good Liar is indeed “tickety-fucking-boo”.

SPOILERS! If you want to know the outcome, scroll down….

Watch the trailer for The Good Liar now:

Betty wins! She has deliberately targeted Roy – who is actually German and stole the identity of an English soldier – and steals his money. He was her English teacher in Berlin in the 40s. He raped her then informed on her family to the authorities. Her father was executed, her mum killed herself and her sisters later died when a bomb struck their house. Betty has loads of grandchildren and Steven is actually her grandson’s partner. She rented the beige bungalow for her plan. After Betty’s big reveal in the now-empty house, Roy is beaten up by two men getting their own revenge, and has a stroke.