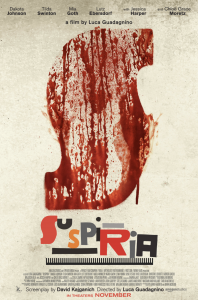 Suspiria is a feminist film, if you use the 1970s definition that it’s a movement dedicated to the liberation of women – a dance academy, run entirely by women (the often ignored older women, to boot), with only female students, its roots going back to prehistory.

Though considering how mums already get the blame for so much in this world, its Three Mothers (Mother Tenebrarum, Mother Lachrymarum and Mother Suspiriorum) aren’t going to do that group any favours. (Those titles translate as darkness, tears, and sighs, which sum up motherhood rather well.)

It’s a democracy, though not everyone agrees with each other about the status of their most important members. But there’s certainly something of the earth mother commune about it too, with the teachers eating together round a wooden table decorated with pretty flowers. Later they also turn out to be enthusiastic cleaners, if not particularly good ones.

A remake of Dario Argento’s famously lurid and blood-soaked 1977 horror, Luca Guadagnino’s film reuses much of that story – a witches’ coven running a German dance school – with additional embellishment (though not of the stylised kind).

There’s no need to have seen that first movie to enjoy this update, and this is a very different kind of film. (Though like the new A Star Is Born vs the 1976 film, while this is a more interesting and subtler take, I would rather rewatch the older version.)

This Suspiria, set in 1970s Berlin – with WW2 a relatively recent memory, and German terrorism looming large – is rather drab, as befits a city that is half-communist. The dance school is institutionalised and dreary. The dancers rarely put the lights on in their bedrooms. There is nothing of Argento’s gloriously vivid obsession with colour. And the music isn’t as screechy. But as they say, it’s the quiet ones you have to watch.

The war has left behind secrets to be discovered and stories long-buried that will insist on popping back to the surface. Meanwhile terrorist group Baader-Meinhof are demanding their members be released from prison, using hijacked plane passengers as leverage. Everyone is attempting some kind of rebirth, an obsession also of dance school head Madame Blanc (Tilda Swinton) who tells new student Susie Bannion (Dakota Johnson) “When you dance the dance of another, you make yourself in the image of its creator”.

Susie is a Mennonite, or maybe Amish, I wasn’t sure – though she talks of a split between the two groups in the 17th century when one was considered too liberal. Another battle for souls. There are flashbacks to a flat landscape and a farmhouse where her mother lies grey-faced and dying. But Susie has a new family now, and a new mother, several in fact. She’s a wild card, untrained but auditioning for the academy anyway; the teachers can sense she’s special and move towards the studio as she performs.

Soon Susie is rehearsing lead roles and both attracting and annoying Madame Blanc. A funny sort of balance, and balance is something they practice for a lot. They argue over whether the dance should take Susie into the air or hold her close to the ground; both want equilibrium but disagree over how to achieve it.

Murmurings of worry come from other pupils. Patricia (Chloe Grace Moritz) has gone missing, after a final terrified and garbled session with psychologist Dr Josef Klemperer (Tilda Swinton in old man make-up, with the most evenly spaced wrinkles I’ve ever seen). One friend asks if she has gone underground. Patricia has links to those who support the terrorists. At the same time there are comments about something else coming to the surface from deep below.

Klemperer is initially skeptical, until he reads her detailed notebooks (listen to women, guys!) Meanwhile Sara (Mia Goth), Susie’s new friend, begins to discover some of the secret horrors hidden beneath the school.

There are some laugh-out-loud moments particularly from the deadpan Madame Blanc, but I can’t for the life of me remember them and while it has bleakly comic elements it’s not a gagfest. There is though a hilarious scene near the end as Klemperer is dragged into the school by cackling women, like on a middle aged Hen Night where after a few drinks the Matron Of Honour assumes some random pensioner is the stripper.

Swinton is excellent, though mannered. Her portrayal of Lutz Ebersdorf playing Klemperer (Ebersdorf is the fake actor original listed as playing the psychologist), is certainly performance as performance; but so, in a way, is her portrayal of Madame Blanc. The teacher’s poise is extraordinary, her low voice and low key demeanour creating a magnetic forcefield that traps and entrances all her pupils. “Love and manipulation may be frequent bedfellows” comments Josef, summing up the school and its mistress entirely.

Johnson is an impressive Susie, managing ambivalence and growing understanding with aplomb. A girl from a sheltered background who flounders before finding her feet, Susie is not at all a victim; it’s more that her life has been choreographed towards this point. She adds her own edge of menace, clearly worrying the very precise Madame Blanc in her willingness to go off piste. And Chloe Grace Moritz’s early scenes set the tone for the menace and madness to come.

Is the film scary? The first scenes are jerky, as Patricia rambles on in fear to her therapist; the camera work is nausea-inducing. Later as Susie dances for Madam Blanc, poor Olga, whose old role the new student is performing, is trying to escape the building with her life. Instead she’s drawn into a sealed mirrored studio, her body thrown around and twisted backwards in a disturbing, grotesque and murderous parody of the dance she once led.

Suspiria is a slow-moving story with regular injections of utter madness that will transfix and repel. The enjoyably bonkers set pieces (imagine 1970s Top Of The Pops dance troupe Pan’s People, only naked and having wandered into an old people’s spa), show extraordinary directorial care in their frenzied displays. But they have to act as the film’s supports, are placed too far apart to do that.

(I’ll admit that Guadagnino’s films don’t resonate with me longterm; I really enjoyed Call Me By Your Name, and felt Elio’s mum was the most interesting character in the film; but remain baffled by the love-in that’s followed that film around social media since.)

I like Suspiria‘s feminist approach, especially the Three Mothers’ existence going back to pre-religious times; a thread of continuity running through and surviving every patriarchal religion and society since. I can’t say I’d rather live under the Three Mothers, unless I was the official Chosen One (the also-rans fare less well) but the yoke of matriarchy would certainly make a change.