You are here: Home / Film Reviews / Shed Of The Dead 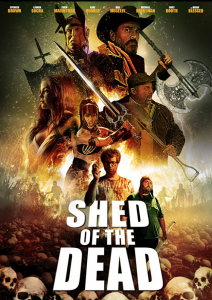 Kane Hodder (who I last saw tearing innocent victims limbs from limb in Victor Crowley), Bill Moseley (who I’m to scared to watch in anything) and Michael Berryman (Wes Craven’s The Hills Have Eyes), face off during a particularly local Undead Apocalypse. And not to let the British side down, national treasure Brian Blessed PROVIDES THE BOOMING INTRODUCTORY VOICEOVER.

Shed Of The Dead‘s end-of-times is similar. Focusing on an allotment in suburban London, the film follows Trevor (Spencer Brown), who spends his days in a tiny garden shed painting fantasy figures when he should be either looking for a job, or planting and weeding. When he’s not painting he’s imagining that he is Casimir the Destroyer, a great warrior (think Thor if he was in a Pantène hair commercial).

Despite hiding away from prying eyes, Trevor’s inability to keep his beds nice leaves him a target for fellow allotment tenant and all-round jobsworth Mr Parsons (Hodder), who (a) wants him to do some gardening and (b) thinks he stole someone’s potatoes. (The former is a crime many Brits would agree requires banishment. Two hundred years ago, the latter probably did.)

Trevor’s wife Bobbi (a hilarious Lauren Socha), runs a hair salon with her friend Harriet (Emily Booth), though the personal services Harriet offers to local pensioners go beyond a quick trim and a whizz round the back with some beard trimmers.

Bobbi walks all over Trevor – and not in a Harriet kind of way, whilst wearing black latex and flicking a whip. She’s awful, but not so awful you don’t secretly admire her. Or maybe that is precisely why I admired her. Deep down she does love Trevor (I think) – and Socha does a sterling job reining Bobbi in. She’s funny, and rude, but also real. You root for her even as she’s being a cow.

Bobbi’s contempt for Trevor (“you ungrateful sod. I’m doing it to lose weight for you” is her riposte when her asthmatic husband questions her decision to take up smoking) is equalled by her affection for Harriet. The friends’ expressions are hilarious, but always the right side of ridiculous. They need their own show, if only they can both survive the onslaught of Britain’s newly risen.

There are many attempted similarities with Edgar Wright’s classic Shaun Of The Dead, starring Simon Pegg and Nick Frost – Trevor’s equally useless friend Graham (The Office‘s Ewen MacIntosh) even looks like Frost, with his big frame and black beard. (Trevor himself reminded me of a short Stephen Merchant.)

Shed Of The Dead is a long way from that film in terms of humour and cleverness, though it’s often endearingly silly.

The first section is easily stronger than the rest of the film. The start of the apocalypse is typically British in that nothing much changes, apart from people being eaten. Harriet, riding the elderly Derek (Michael Berryman) like a horse round an upstairs room at the salon, is devastated when her client dies with her in the saddle, so to speak.

Even among Britain’s walking dead, rules still have to be obeyed; cue one of my favourite scenes, as a zombie lollipop lady helps two zombie children across the road.

Likewise, a local commuter train regularly rushes past the allotments, horn sounding; the only different once the undead start rising is the flames and screams coming from its carriages as it careers along the track. (Whether this seems the most unlikely part of the film will probably depend on the punctuality of your local rail service. Despite its terrors, watching the excellent zombie flick Train To Busan I admit I was jealous of how the Korean rail service kept running.)

Meanwhile Trevor is involved in an alteration with Mr Parsons, who then accidentally meets an unfortunate end. It’s only when Mr Parsons turns out to no longer be dead that Trevor realises something is really up, leading to him attempting escape through the roof of the world’s smallest garden shed (Skyscraper this is not). Luckily Doc (Bill Moseley) is on hand to help, and let’s face it a man in a cowboy hat with a slo-mo swagger will be most successful during a zombie apocalypse, when speed rarely seems to be of the essence.

The Casimir fantasy sequences work quite well. They look good, if not particular expensive, with their orange and grey stylised landscape. Their purpose is to make Trevor learn how to be the sort of hero suburbia needs him to be in times of peril, and for a low budget device they’re rather effective.

There’s a home-made feel to some of the scenes (including that lollipop lady) though that often adds to its charm. I did like the allotment showdown, as the grey-faced undead staggered forward en masse, like me and my fellow PTA mums gatecrashing Gardeners’ Question Time after a big night out.

The three Horror Icons™ are clearly having fun. I particularly liked Hodder playing against type as Mr Parsons, utterly uptight and always petition-ready.

Trevor’s friend Graham is a sleaze. He redeems himself later, but that kind of humour requires more careful handling, ensuring that a character holds responsibility rather than the film. In this case it doesn’t work, as he sniffs a bikini wax strip used by Harriet, the object of his affections. Likewise Doc, striding the leafy paths taking “lady parts” as some of his trophies, isn’t funny.

Still, as a 48-year-old often faced with impossible standards as to what Hollywood feels women should look like, it was refreshing to watch a film where I genuinely looked better than nearly everyone in it, if only because I still have a pulse.

Shed Of The Dead starts well and then ends up as lumbering as its undead extras. It’s derivative, and the crasser jokes should have either been better handled or missed off altogether. But Trevor is an engaging hero, an everyman neither too dim not too smart. And Bobbi and Harriet are, well, to die for.

Buy / rent Shed Of The Dead on amazon uk

Watch the trailer for The Shed Of The Dead: