You are here: Home / Film Reviews / Train To Busan 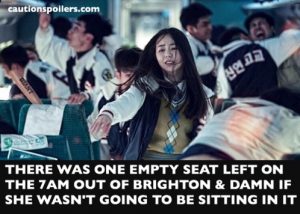 The only really jarring note for Brits watching Train To Busan is the perfection of the Korean railway network.

Even during their zombie apocalypse it still seems rather better than some of the journeys I’ve endured over the years. For many of us, a public transport system that perfect and immaculate seems less believable than hoards of the undead appearing at the top of the platform escalator.

If you didn’t catch Train To Busan at the cinema last year it’s time to put your Korean public transport envy to one side and watch. Part horror and part satire, it’s an exceptional movie that drags you screaming out of your zombie comfort zone at bullet-train speed while you watch an ever dwindling group of survivors battle to stay alive.

Seok-woo (Gong Yoo), like many before him, still tries this tactic though. A young, handsome hedge fund manager, whose wife has left him because of his workaholic selfishness, he gets home from the office one night with a Wii is for his young daughter Soo-an (Kim Su-an), who points to an identically packaged Wii in her bedroom with the kind of resignation young children feel when their parents let them down once again.

In an  effort to make it up to her Seok-woo agrees to her request to take her to Busan on the train in the morning to see her mum. The next day small signs appear that something big is happening. Fire engines screech past, ash falls from the sky. But at the train station all is calm.

Just as the KTX train is about to leave, with everyone in their seats, a young woman throws herself into the vestibule jerking and crying, her veins stark against her skin as she tries to tie a tourniquet around her leg. In a train washroom a bearded homeless man is shaking and rocking as he repeats that “everyone’s dead”.

Soon the woman is attacking the immaculate and smiling train attendant who is trying to help her as she lies on the floor. Within seconds the attendant – by now with hair askew and her face covered in blood – is throwing herself in a frenzy at other passengers in the carriage. As the horror unfolds at lightning speed, the survivors retreat, with the cloudy-blue eyed, limb-jerking, Infected pushing against the sliding glass carriage doors, teeth bared and faces covered in each other’s blood.

The uninfected passengers include Seok-woo, smooth and hard-nosed who knows that his daughter needs to toughen up. Sang-hwa (Ma Dong-seok) is a hulking working man with a heavily pregnant wife, Seong-kyeong (Jung Yu-mi). There’s a self-centred middle aged businessman called Yon-suk. A school team of teenage baseball players and Jin-hee, who fancies one of the players. In-gil and Jopng-gil, two elderly sisters. And the homeless man.

The train to Busan stops and starts while at stations petrified passengers try desperately to clamber on before being pulled back and bitten.

There are a few – but never too many, this is not a simple homage to the genre’s many tropes – nods to traditional zombie films. A bite infects within seconds with the infection assumed to have originated at a local biotech firm. Sad goodbyes are said over the phone. Yon-suk will literally throw anyone under a train to survive, making us wonder just who is the enemy.

Satisfyingly satirical, the distinctions between the first class survivors and everyone else mirror those of the uninfected and the infected who turn like an underclass who have finally had enough.

There’s a stark contrast when the calm and quiet stations are suddenly torn apart with crazed crowds of infected and uninfected rushing towards the passengers desperately trying to escape.

The women are resourceful. Pregnant Seong-kyeong is instantly protective of the small girl, and comes up with an ingenious solution to buy them all some time. Teenage Jin-hee constantly tries to make other passengers wait for uninfected stragglers so no one is left behind.

Soo-an herself is silently watchful, small enough to dart around people’s legs as the horrors unfold. Kim Su-an who plays her is completely believable in her relationship with her father, adoring yet even at that young age well aware of his faults and selfishness.

The pressure is not quite relentless for the viewer; there are periods of extraordinary tension counterbalanced with eerily calm moments, as the train speeds through tunnels, stops at stations, and survivors embark and disembark in quiet fear.

The natural order and cleanliness of the surroundings is often at odds with the chaos unfolding around them (there’s an astonishing scene where there are so many zombies rushing forward through a carriage towards the terrified survivors that – as the undead clamber over each other – they look like they’re scuttling along the ceiling).

Genuinely brilliant, genuinely terrifying, Train to Busan is jolting like a 1950s British locomotive. But this is South Korea so the phone network continues to operate right until the end.

buy / rent Train to Busan on amazon video from amazon.com

buy Train To Busan on dvd or blu-ray from amazon.com

Watch the Train To Busan trailer: