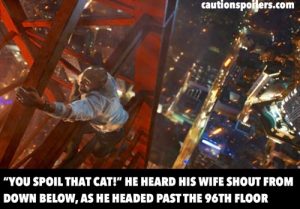 Warning: spoilers ahead if you don’t know how action blockbusters work.

Skyscraper is one of those films that manages to combine real thrills and tension with comfort blanket understanding that it’s going to follow a straightforward and successful formula.

I genuinely worried about security expert Will Sawyer’s children as they tried to escape from half-way up the The World’s Tallest Building™ with flames leaping around them and debris whizzing past into the void below, whilst knowing full well that they’d be fine.

And as soon as it was disclosed that Sawyer’s doctor wife Sarah (Neve Campbell) was an ex-combat medic and had done tours of duty in Afghanistan, I knew she’d get her kick-ass moment, though the real bravery is when she gives her young son a piggyback across a narrow wooden plank over a several thousand feet drop into a fiery hell (kids are wrigglers, let me tell you).

If you’re wondering why I’m only now getting round to mentioning that Dwayne ‘The Rock’ Johnson plays Sawyer, it’s because (a) you probably know already and (b) I don’t like putting actors’ names in brackets before an apostrophe, as it just reads wrong.

And very well too. He’s an action hero for our times: brave and inspiring on the outside; scared, scarred and partly held together by duct tape underneath.

Sawyer is a family man, but believably so. Stuck in a burning atrium, he and Sarah work together and think about what they need to do to rescue their children. It’s these little moments, beyond the action (which is both frightening and gloriously over the top) that raise this movie up. Not quite to the heights of The Pearl, The World’s Tallest Building™, and the location for this flame-ridden thriller, but pretty high nonetheless.

The building does have a stunning pearl-like orb at its top, with two giant curved turbines just below, producing the building’s energy. There was also a lot of gubbins about electromagnetism which I didn’t understand.

Like me after spending 15 hours getting ready for a mums’ night out, it’s an undeniably impressive construction. And a thing of great beauty – inside it’s open and filled with flowers and waterfalls, and reminded me of a city in a film about far-flung colonised planets in our unrealistically near future. Once it catches fire you could argue it really comes alive, as flames leap and dance.

Sawyer has lost the lower portion of one leg, after a hostage situation in his previous career went horribly wrong a decade ago. It’s an interesting facet of what makes him; in movieland we’re used to seeing non-organic additions making superheroes of the humans inside. Alternatively characters are so disabled the film focuses on that, and an able-bodied actor gets an Oscar nomination.

Here Sawyer has had to learn to live with his disability, and its effects. In an early scene his bag is snatched in a crowded walkway; he’s slightly injured anyway, but doesn’t try to run after his assailant, leaping over barriers. He just stays where he is. Later in the burning building he’s forced to stick his prosthetic leg together with duct tape. It has its uses in a crisis though, and makes a great door wedge. (The duct tape scene are funny but also show the real bodily frailties of a human being, even in a film filled with superhuman feats.)

Will is now a self-employed security consultant; he and his family have come to Hong Kong so he can assess the building. Once its safety features are approved, the upper residential quarters can be let out. As it stands, only Sawyer, Sarah and twins Georgia and Henry are living there, on the 96th floor; with the billionaire developer of The Pearl, Zhao Long Ji (Chin Han), in the penthouse on the 220th floor.

Sawyer got the job through his friend Ben (Pablo Schreiber) who then has the misfortune to expire part-way through an important explanation, which may be why I wasn’t sure what was going on.

Though if there’s one thing we do know will happen to a giant skyscraper with state-of-the-art safety features, it’s that it’ll catch fire.

In short (and don’t quote me on this) Zhao is under attack from Kores Botha (Roland Møller), who Sarah later inexplicably tells police is Scandinavian when he clearly sounds South African, and is called Botha. Maybe that’s why they don’t entirely trust her or Will until they’ve seen him jump from The World’s Tallest Crane™ into The World’s Tallest Building™.

Botha has a grudge against Zhao, and has developed an ingenious if overcomplicated way to get his own back involving fire that starts when you add water, which seems like cheating to me. Suffice to say, Will’s wife and children are unexpectedly in the building as the flames take hold.

We’re never allowed to forget just how high we are. This is not a film for height phobics; even when Will isn’t peering over the side of the shattered building, we suddenly find the floor turns to clear glass and it’s like they’re lying in mid air.

That crazy leap is surprisingly thrilling once we’ve seen what it takes to get him there; and there’s an extraordinary Hall Of Motion Detector Panels on the top floor which doesn’t sound as snappy as a Hall Of Mirrors but actually (I can’t believe I’m saying this) is more impressive than the one in John Wick 2.

The pressure is relentless, and it does feel a bit wearing at times. Though the frequent sections of Sawyer doing something foolhardily brave and yet ultimately successful are buoyed up by the crowd’s reactions, watching him on giant screens below. Unsurprisingly even as the police stand firm in considering him a potential criminal, he’s soon an anti-hero to the public (what great exploits nowadays don’t happen in the presence of an audience?)

This is a mad skyscraper caper™, but while it does allow the occasional humorous nod to itself and its overblown craziness, it isn’t too knowing.

And I’m glad we’ve found our way back to a place where we can enjoy mindless blockbusters without having to feel clever at the same time. I felt many things watching Skyscraper, but clever wasn’t one of them.

Though as a technophobe I was delighted to find out the best way to fix anything is indeed to switch it off and on again.