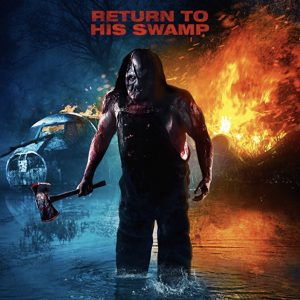 If you’re after gore, Hatchet 4: Victor Crowley has it in buckets. There are many, many deaths and the camera lingers lovingly over them, like the BBC filming Nigella Lawson seductively licking a spoon after mixing a Victoria sponge.

Limbs are hacked then pulled away from bodies still partially attached by gristle. Heads are caved in with boots. In one extraordinary scene, a screaming woman has her arm pulled off which is then shoved up her nether regions, only to emerge through her mouth, her mobile phone still clasped in her dead hand.

She’s then left standing there, a celebratory monument to horror film tropes and scream queens everywhere.

It’s a decade since the Honey Island Swamp massacre, when 40 people were killed during a tourists’ boat trip in Louisiana. The only survivor was paramedic Andrew Yong (Parry Shen), who blames the killings on long-dead monster Victor Crowley.

Crowley’s story is actually very sad, though I still wouldn’t like to meet him on a dark night to talk things through. Cursed in utero, he was born with deformities and was looked after by his father after his mother died. But when local children set fire to his house one Halloween, his dad’s attempts to rescue the boy accidentally resulted in Victor’s death by hatchet. Since then he has regularly reappeared – or been summoned – to wreak havoc, and kill anyone venturing into the swamp.

This time there is a veritable buffet of eligible victims for Victor (look, first names already – I told you I felt sorry for him).

Heading to the location of the massacre are Andrew, whose publicist Kathleen (Felissa Rose) claims to have negotiated him a fortune for an on-site interview to mark the anniversary; talk show host and Andrew’s ex-wife Sabrina (Krystal Joy Brown), who thinks he committed the murders himself; her TV crew; plus a team of three young would-be filmmakers who plan to make a movie of the massacre – “Hatchet Face” – and also want Andrew to appear in it.

Poor Andrew has has a terrible time in the intervening years so I’m going to let him off sucking every last morsel of z-list celebrity from his experiences. He has a ghostwritten memoir out, called I, Survivor – a title which will set all editors’ teeth on edge as much as it does the victims’ families, who think he killed them.

His (low) level of fame means that his book-signing includes requests to sign not just the pert boobs of a young lovely but also a man’s penis.

Down in the swamp, filming a budget-raising trailer, the filmmakers – director Chloe (Katie Booth), her boyfriend Alex (Chase Williamson) and make-up girl Rose (Laura Ortiz) – are aiming for realism, which means watching the incantation that cursed Crowley on endless Youtube videos.

Up in the air, as the curse is repeated over and over, the tiny plane bringing Andrew, Kathleen, Sabrina and her crew suffers engine failure and plummets into the swamp.

And the muddy water starts to bubble as Vic (short names now! We’ll be married soon) is woken from his watery sleep.

I’m a wuss when it comes to horror films, though I can tell you now Hatchet 4: Victor Crowley isn’t that scary. I did watch it with the light on, but it was the middle of the night and the aircon sounded like a storm was raging outside.

It is bloody, and bloody funny though. The humour is daft and often very stupid (we’re definitely not talking Jane Austen-esque epithets and arched eyebrows). There are lots of in-jokes. But I’d be lying if I claimed I wasn’t laughing most of the way through.

Victor (Kane Hodder) is a very visible presence – there’s not much unsettling, spine-tingling fear gradually creeping up on the victims. And while he’s a bit of a mess, I bet one of those magazine makeovers would give my future soulmate a whole new fanbase.

The film quickly switches from bright daylight to scary night. The swamp and sky are dark blue and grey. The crashed plane is red-lit inside from the emergency lighting. As Crowley appears from his watery home, the little plane is filling with water. Dillon (Dave Sheridan), a local tour guide and would-be actor for Chloe’s film, has a boat nearby if only they could get there. Crew member Casey (Tiffany Shepis) is trapped under some seats.

Victor Cowley has a diverse ensemble cast (many of them horror veterans), though some play it for laughs and others try to take their characters a bit deeper, before their heads and limbs are sliced off. I loved Rose who’s brave and has nous in spades. Always ready with a barbed put-down, she also sees genuine warmth and friendship when it’s there.

I even quite-loved Dillon, mainly because of a joke about his low number of Youtube channel subscribers that’s still higher than mine (though of all the characters I think Dillon will be most divisive for fans). Shen is very good as ground-down victim Andrew, who has simply tried to make some money after a decade of strangers calling him a murderer, but now knows what’s coming for them. Katie Booth is terrific as aspiring director Chloe, and is one of those actresses I was convinced was better known than she is.

Rose and Sabrina are mistresses of the classic one liner. “the only worthwhile thing you’ve done is when you signed that man’s dick at the bookstore earlier” the make-up artist tells Andrew, whose book overplays his own heroism in the earlier disaster. “Discount Oprah” she calls Sabrina, whose talk show survives on a stream of guests of generally low believability. “The OJ Simpson of Honey Island Swamp” Sabrina calls her ex-husband.

There are a few surprises. My expectations of who would survive were turned on their twisted, eyeless head halfway through. One death plays out over a considerable length of time and is the nearest the film gets to real sadness. A few genuine friendships are forged (when I say a few, I mean one – Rose and lovable dipshit Dillon).

This is a jokey horror that gallops along at quite a pace. It doesn’t do anything new (and I say that as someone who is by no means a horror connoisseur). The very first scene, as a 1960s couple get engaged on a boat in the swamp, and end up stuck together by her weepy mucus, sets the whole ridiculous tone for the movie. But hell it’s a blast. Or maybe it’s a blast from hell.

Note: There is a mid-credits scene, that will appeal to fans of the other films (which I haven’t seen so yes I had to google).

buy Victor crowley on DVD, blu-ray or buy / rent on vod from amazon.com