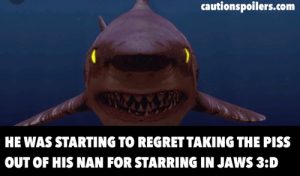 So bad even Satan has taken himself off the credits, I actually wanted to give this half a star but my review template will only allow a minimum of one star. So, I can only assume the developers have never seen Shark Exorcist.

I wasn’t sure what Shark Exorcist would be about and to be honest I’m no clearer now. There’s a nun (Christy Moritz) who likes stabbing people to death then smearing their blood on her face, her visage a picture of ecstasy, like me finally learning how to contour from a YouTube video (I haven’t actually worked out how to contour yet, but trust me I will).

There are several young women sunbathing in their bikinis or writhing on the ground, possessed by a demonic presence. And a giant shark with glowing eyes, so terrifying that all its victims start struggling and disappearing beneath the waves before it actually swims anywhere near them.

And there’s some terrible acting, of the kind that makes me want to go back through all my one-star reviews and add another star simply by virtue of them not being Shark Exorcist.

But I’m actually amazed that any film ever gets completed, considering how much is involved, so I’m not here to diss movies for the hell of it. Shark movies that mash-up murderous Great Whites with other genres are a sub-genre in their own right now, and to be fair apart from the Sharknado series, which boasts some names we recognise and decent production values, one of the virtues of these films is that they are cheap and silly, and star no-one that you’ve ever heard of. So I could actually have forgiven the lack of decent acting if the story had made any sense. But I genuinely had no idea what was going on.

Still, it has some things to commend it. I liked a couple of the women’s outfits. And the fake Tubular Bells-esque music that starts playing whenever anything demonic happens which was quite often. Oh, and shark attack central Paris Landing, which is apparently a real place but is also the perfect p0rn name.

“The world has betrayed me so the world will taste my vengeance” says that nun, who has apparently killed lots of small children. The authorities are after her, but a young woman finds her first, accuses her and is stabbed to death for her trouble before being thrown into the sea. But that nun’s habit is a clever disguise, as actually Sister Blair is a servant of Satan, and summons an avenger: a shark with glowing eyes, who then hangs around for a whole year before anything much else happens.

12 months on, three friends are headed for the lake to chill out. There are no lifeguards at Paris Landing, so while long-haired blonde Lauren (Madison Carney) and long-haired brunette Emily (Channing Dodson) top up their tans, Ali (Angela Kerecz) – long-haired blonde, grumpy and with boyfriend troubles –  goes for a swim and is attacked by that shark. She survives and her stay in hospital is short as she is “miraculously healed”, but something is different once she is released.

Then there’s red-haired paranormal investigator Nancy Chase (Roni Jonah), who, as news gets out about all the attacks at Paris Landing, tries to commune with the spirits of those people killed. She does this by writhing around on the ground moaning, like me when someone spoilered John Wick 2 for me two days before the UK release. Her nemesis, red-haired Brianna Bennett (Kirstin Vanhooser) from TV show Ghost Fakers also pops up.

As do EVEN MORE long-haired blonde women, two of whom have to go into the water as part of a Sorority initiation and I’m not really sure what happened to them but it involved screaming, probably mine, as I finally lost the will to live.

Plus Father Michael (Bobby Kerecz), a hot priest in his long black robe, like Father Ralph de Bricassart in The Thorn Birds (what is it about getting your 40s – you can remember stuff like this from 1983 but not that you were meant to be getting your nails done 10 minutes ago).

I can’t actually tell you what else happens as I got confused with all the young women in bikinis with long blonde hair, who were impossible to understand before the shark attacks (that’s not a criticism, I am 46 and wouldn’t expect to have a clue what a teen is going on about, which is basically as it should be, in a sort of Circle Of Life way) and even more incomprehensible after.

But I can tell you there are more attacks, and possessions, an exorcism of someone tied really quite loosely to a tree, and of course, like all the best (and in this case worst) films, self-sacrifice.

Shark Exorcist is mercifully short at 71 minutes, I’ll say that for it. Though there is a very lengthy mid-credits scene, involving an aquarium gift shop. Sadly I didn’t see all of it though, as my DVD gave up at that point, possibly in protest. Don’t worry DVD player, it’ll be a worthy four-hour historical drama next time!