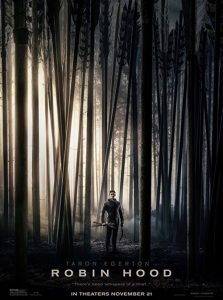 This is a Robin Hood for the 21st century. I mean the 14th century. No wait, the 23rd century, somewhere in a galaxy far, far away.

This film lacks the courage of its convictions, and even worse, there are no good jokes. Its mix of parallels with our times, modern day realism and futuristic stylistic ideas just creates a muddle. There are glimmers of good ideas, but it’s taken a day for me to find them.

I’m so annoyed about the two hours I lost watching this I can’t even be bothered to think up any puns, and you know how I love those.

Admittedly, Robin of Loxley’s physical preparations as John mentors him from Lord of the Manor to bank robber may have you all a-quiver (okay one pun but that’s your lot), as draped in huge chains he attempts feats of strength in the manner of Geoff Capes on Britain’s Strongest Man.

Robin, a pampered young lord with a nascent social conscience, falls in love with Marian after finding her stealing one of his horses. Their idyll is shattered when Robin is drafted into the latest Crusade (via a big medieval letter with DRAFT at the top of it) and he then disappears to Arabia for four years.

It’s there he witnesses the brutality of the English towards the people whose lands they’ve invaded; and meets John (Jamie Foxx), a prisoner, who stows away in a hospital ship to England after Robin is injured trying to protect their captives, including John’s son.

Back home everyone believes Robin to be dead, and the Sheriff of Nottingham continues to exploit the locals who work and live in a giant mining complex.

But the seeds of revolt are being sewn, resulting first in backchat from Marian and later in Robin’s robberies.

Ben Mendelsohn’s Sheriff of Nottingham is the best thing in this, an orphan whose brutal start in life has turned him into a psychopathic monster. Expensively yet soberly dressed, his plain clothes and long silver-grey coat are a good counterweight to his rage, poured into a coldly fake-populist political animal.

The Sheriff of Nottingham always has the most scope and always the best lines. Certainly coming after Alan Rickman’s scene-stealing turn in 1991’s Prince Of Thieves, actors following him have to try to rein it in a bit; no one wants to be accused of copying the master. But Mendelson’s sheriff is one for any age, in the past or the future.

The film works  – way too hard – to show the parallels with modern life. This works incredibly well in some films; They Shall Not Grow Old, the recent colourised documentary about the First World War, brings home to today’s young men how they and the WW1 fighters are separated only by time.

But Robin Hood has so many other ideas stuffed in that it doesn’t feel genuine; and these modern parallels are dotted with details that seem straight out of a school play. Will Scarlet (Jamie Dornan), Marian’s new boyfriend, is a working man who talks in explicitly modern terms about his political ambitions (Dornan is very underused; maybe Scarlet was being set up for a major role in a sequel).

Once back in Nottingham, initially Robin and John’s robberies are all about stealing from the rich, and it’s only when Robin literally overhears Marian saying she wishes this mysterious thief would give his gains to the people that he starts to do so. (You see what I mean about school plays.)

Soon he’s nailing his anorak hood to walls to show he’s been there; while he spends the rest of his time trying to infiltrate the Sheriff’s inner circle as young Lord Loxley.

Egerton, great fun in the Kingsman movies and an enthusiastic delight in Eddie The Eagle, never really finds any depth in his transformation from pampered rich boy to freedom fighter; if anything he’s quite irritating.

I did like Robin’s army stint during the Crusades, though I suspect most won’t; it’s a rather clunky conceit but still an interesting attempt to show currency. Robin and a group of young men, thousands of miles from home in a war not of their making but where they are the aggressor, are targeted by an unseen opponent. They’re navigating an environment where they are at a disadvantage and trying to return fire at the same time. It’s a scene we’ve seen plenty of times in modern war films, though this time it’s bows and arrows against a massive crossbow. Later they go all John Wick as they stop-start move through a narrow alley, weapons held just like modern guns, trying desperately to cover themselves.

Even this wears thin though, and I had to laugh when someone shouted “Signal the stone throwers!” which had me expecting a Money Python-esque stoning by disguised women desperate for some excitement rather than the catapulting of huge rocks over the city walls.

There are many elements that seem to have come straight from Guy Ritchie’s underrated King Arthur: Legend Of The Sword from 2017. Comparing the two you can see how Ritchie demonstrated a much better hold over his modern flourishes. His didn’t all work, and it’s a film that is far from perfect, but overall his ideas and stylistic choices were both more coherent and more entertaining.

Like King Arthur, the clothes in Robin Hood seem meant to be timeless and practical, with occasional modern touches. (What is it it with origins stories and tightly quilted leather jackets?) And all that slo-mo fighting!

Robin Hood also takes some odd stylistic turns. Nottingham’s rich seem to have come straight from either a 1970s Studio 54 party or one of those Doctor Who episodes where some great gathering is filled with guests exhibiting fashion choices from across the galaxies. Stiff, highly decorated cloaks and enormous quiffs abound, mostly on the women.

Tim Minchin as Friar Tuck makes the most of what he’s been given, which isn’t much. Eve Hewson has little to do as Marian and she and Egerton don’t display any chemistry.

The lack of faith in the movie’s own choices creates such a distraction that it’s hard to peer behind that and find what is worthwhile. Medelsohn is great, holding himself back as the lonely brute whose horrible upbringing has both destroyed his capacity to love anything but himself and his money, and made him hungry for revenge, even as it is misdirected. Foxx does what he can, and John is an entertaining and loyal mentor, though his motivations don’t really make sense.

Oh and Marian’s smoky eye is on point for 2018 though possibly not the 14th century.