You are here: Home / Film Reviews / King Arthur: Legend Of The Sword 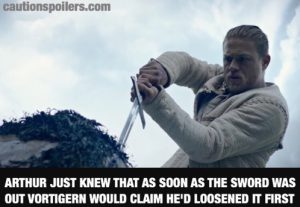 This a stunning film to look at, with gloomy, echoing Camelot, a castle perched on a high cliff, contrasting with the busy and bustling Londinium – where everyone is a petty criminal, mostly with a heart of gold. (Though the capital is really, really clean. Still, the Romans hadn’t been gone long, and say what you like about them, they made the aqueducts run on time).

Fire brightens the screen, piercing dreams, lighting dreary corridors and burning buildings; while battles with mystical mages mean soldiers are as likely to be facing down supersized elephants as archers and swordsmen.

To counter the fire there is water, water everywhere – the Lady of the Lake, and underground watery caverns which house an ugly guy and some prophesying sirens, and what is a quasi-historical epic without a prophecy?

And this is an epic, even if not in the traditional mould. Epics need some stirring lines and a rock-bottom from which our hero can only rise, and this film certainly has those: “You wanted a prophecy? This is your prophecy! The man who pulled sword from stone. Behold your born king!” is heard as Arthur (Charlie Hunnam) is brought out of Camelot in bonds, to show the people who their great and foretold leader really is, a shackled man-boy and he’s even lost his sword.

Years previously, Uther Pendragon (a suitably regal Eric Bana), at war with Mordred, leader of the magical Mages, had been killed in a nighttime attack on Camelot while Arthur, still a small boy, escaped to Londinium to be brought up in a brothel. Since then the Britons have been under the yoke, as their usurper king Vortigern threatens and kills his way to some sort of security.

Vortigern, played by Jude Law, is the best thing about King Arthur Legend Of The Sword. Seizing the throne after the violent death of his brother Uther, Law’s Vortigern is played like a much better-looking Richard III – striding about his stage or slouching across his throne, by turns taciturn, menacing and narcissistic, knowing that there will have to be more death to secure his crown. The sword Excalibur sits in a courtyard beneath Camelot, and Vortigern knows what he will have to do when someone manages to pull it from its rock.

Meanwhile Uther’s son is still in Londinium, and in a rather sick twist on the search for a tiny foot that fits Cinderella’s glass slipper, the adult Arthur is shipped along with other young men to Camelot, to try and pull the sword from the stone. Those who fail (everybody so far) are branded on the wrist.

But before Arthur can have a go he must first take part in some verbal sparring with soldier David Beckham (who is not an actor but frankly as a fun cameo it works perfectly well). Is it possible to spoiler a 1500 year old folktale? Arthur pulls the sword from the stone and promptly falls over, overwhelmed by its power, or possibly by meeting David Beckham.

What follows is a drawn out battle, taking many forms, between Arthur and Vortigern as the young man tries to take his rightful throne from his uncle, who is in no mood to give up power.

This is a very male film, with much extremely enjoyable phallic symbolism – several of the main protagonists seem to derive their power from either swords or incredibly tall towers. His Knights of the Wheel of Cheese, sorry the Round Table, are a motley assortment who prove themselves allies of Arthur (and yes that joke is from this film and not from Monty Python And The Holy Grail).

The women are mainly clothed and silent, or, in the case of the sirens, naked but remarkably chatty (they rather brilliantly emerge from the watery depths underneath Camelot entwined in a giant octopus). Annabelle Wallis is good as Maggie, Vortigern’s servant, a small role that is underwritten. But there’s really only one main female character, the Mage (Àstrid Bergès-Frisbey), who is quietly powerful and appears several times at just the right moment to save Arthur’s bacon.

There are lots of typical Guy Ritchie flourishes, which work only some of the time. Arthur’s planning meetings are certainly enlivened by the flash-forwards. Some of the outfits seem weirdly modern, white shirts and shiny black leather jackets (or maybe there really is nothing new in men’s fashion). There is, though, a bit too much of the cockney geezer blokiness. Arthur’s sardonic humour falls flat as often as it hits the spot and although he  is a typical twenty-something with that sureness that lasts until a First Great Test, in his case trying to control the sword itself once he has retrieved it, at times Hunnam seems rather ill at ease in his role.

I did like that Arthur is well aware of what is expected of him: “You’re trying to get me to do something razzle dazzle with that sword” he says rather wearily, as people wait expectantly for some razzle dazzle with his sword, and he seems a man painfully aware that while he already has leadership qualities, kingship – and swordsmanship – needs to be learned and earned.

This is an enjoyable take on the familiar Arthurian legends. It’s just over two hours long and while I wouldn’t call it pacy, it doesn’t drag and manages to avoid ponderousness. Unfortunately something about the storytelling just didn’t really grab me – so while it’s not nearly as bad as I was expecting, it also isn’t as good as it could be.

Check out the King Arthur: Legend Of The Sword trailer here