You are here: Home / Trailers / The Man. The Myth. The Legend. No Not John Wick, King Arthur Legend Of The Sword Trailer 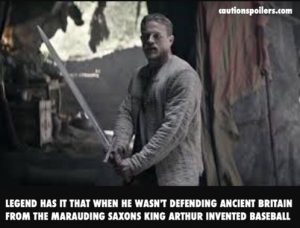 In Britain we don’t have John Wick. But we have King Arthur, who according to his biographer Geoffrey of Monmouth, once killed three men in a tavern with a quill pen. A fucking quill pen!

He didn’t really. Or not in this version. In this retelling, Arthur’s father is killed by Vortigern, Arthur’s uncle, who seizes the throne. It is only years later when Arthur pulls the sword Excalibur from the stone that he is forced to to acknowledge its power, find out who he really is, and and eventually confront his father’s killer.

Guy Ritchie’s fantasy film, starring Charlie Hunnam as King Arthur, Àstrid Bergès-Frisbey as Guinevere, and Jude Law as Arthur’s nemesis Vortigern, is released in 3D and 2D on 12 May 2017.

As Monty Python so sagely said: “Strange women lying in ponds distributing swords is no basis for a system of government. Supreme executive power derives from a mandate from the masses, not from some farcical aquatic ceremony.”

Although after the past year I’m starting to think that, to paraphrase Winston (Churchill, not John Wick Winston) in the worst possible way, “strange women lying in ponds distributing swords is the worst form of Government except all those other forms that have been tried from time to time.”

Check out the trailer below.